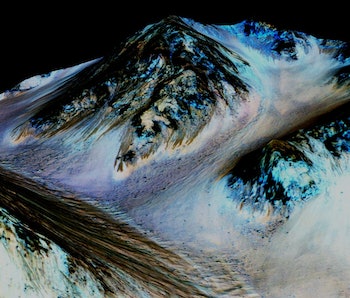 Four days ago, NASA announced an announcement. Today, after a weekend filled with wild conjectures, the agency told the world that water currently flows on the Martian surface

The announcement was accompanied by the publication of a new paper published in Nature Geoscience analyzing high-resolution imagery acquired by NASA’s Mars Reconnaissance Orbiter. Back in 2011, University of Arizona planetary geography researcher Alfred McEwen and his student Lujendra Ojha began investigating the properties of geological formations like craters and canyons on Mars. When the imagery was cleaned up to remove distortions caused by lighting and shadows, the pair noticed a strange thing: dark streaks along the slopes and gullies formed during warm seasons and disappeared during the cooler seasons. They were suspicious.

The pair suspected that liquid water — briny due to the high salt concentrations on the surface of the planet — was the cause of those dark streaks, dubbed “recurring slope lineae.”

“But we had no direct detection of water,” McEwen said at today’s press conference. “That was our best guess.”

McEwan and Ojha (who would go on to graduate school at Georgia Tech), along with several others, continued to study the origin of the RSL sites in an effort to determine what Ojha called the “chemical identity” of the dark streaks, water or otherwise.

These RSLs are in challenging areas, so you can’t just send a rover out to these cavernous spectacle to take a look and see if it’s water. Ojha and his colleagues turned to an instrument on the Reconnassiance Orbiter capable of making spectroscopic measurements of the surface of the planet — which basically means using wavelengths to determine the geological and chemical composition of what’s in the rock. They specifically looked at the signs of hydrated salt in four different RSL locations, in which salt disappeared as the RSLs would subside in the cold months.

Combined with other analyses, Ojha and the rest of the researchers were able to quickly determine that water was responsible for causing the presence of RSL sites, and that water helped shape the formation of the cavernous rocks where they appeared. Jim Green, NASA’s director of planetary science, put it in more explicit terms: “Liquid water has been found on Mars.”

Green was more reserved about the implications of the discovery of the search for extraterrestrial life. “This [discovery] is tremendously exciting,” he said. “[But] we haven’t answered the question…following the water is a great start to that.”

McEwan is less reserved. He believes the chances of life on Mars existing in the subsurface is “very, very high.”

Overall, the presence of liquid water turns the question of life on Mars from a thought exercise into a reasonable scientific priority. It gives NASA and the rest of the world’s space agencies the impetus to go searching for fossils in the Martian bedrock.

The discovery also comes at an excellent time for agencies and private companies looking into Mars exploration. The Reconnaissance Orbiter and the Curiosity Rover have collected a tremendous amount of data in the last few years. NASA and the ESA is ramping up Mars research in the next five years with the launch of the Insight Lander next to explore the seismic and heat activity of the interior of Mars; a new lander in 2018 with the capability of analyzing subsurface organic molecules; and a brand new rover in 2020 that will collect samples that NASA hopes to bring back to Earth for analysis.