James Webb Space Telescope: Why dirt may ruin our best view of aliens 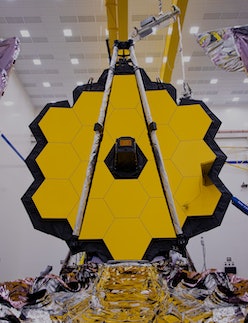 A single speck of dust, or the amino acids, water, and proteins that make up a fingerprint. That’s all it takes.

Minuscule foreign substances can spell disaster for a space telescope — just one mote can throw off a telescope’s sensitive instruments. You can’t wipe a lens clean very easily once the telescope is in orbit, putting the entire mission at risk.

For NASA’s James Webb Space Telescope, the stakes are even higher: The James Webb will be located a million miles from Earth.

According to NASA, the Webb telescope — years in the making and oft-delayed — will travel farther than any current or planned crewed spacecraft. No clean-up crew can reach the James Webb Space Telescope.

Enter Colette Lepage. She’s a contamination control engineer. It’s a smidge reductive to say she merely keeps things clean, but she shares the credit if not a single particle or molecule finds purchase on the James Webb Space Telescope’s precious hardware.

The telescope is scheduled to launch into space in December.

If the telescope is not entirely free of contamination, it risks ruining the mission and risking the estimated $9.7 billion spent on the project.

A key difference between Hubble and Webb is that Hubble is only 375 miles above Earth, in low-Earth orbit. The Webb will be located at the second Sun-Earth Lagrange point, the already mentioned 1 million mile marker.

She’s set to reunite with it in September, right before it launches in December to take up the mantle of the ailing, long-serving Hubble Space Telescope.

How to keep a giant telescope clean

People like Lepage are critical in ensuring that the telescope works the way it is supposed to and that Earthly particles don’t make their way into the cosmos.

Lepage grew up in Ontario, Canada, with a passion for space and technology. She studied chemical engineering at university and eventually moved to the United States in 1999 after she spotted an advertisement in the Washington Post for an entry-level position at NASA’s Goddard Space Flight Center in Maryland doing contamination control. She got the job.

A few years later, Lepage had risen through the ranks. She began managing the Spacecraft Systems Development and Integration Facility Cleanroom at NASA, one of the largest cleanrooms in the world. To get a sense of the enormity of her new domain, this cleanroom once housed the Hubble Space Telescope before it launched in 1990.

It is only fitting then that Lepage is now part of the team charged with keeping the Hubble’s successor, the James Webb, free of grime.

“I started managing the cleanroom while Hubble’s servicing missions were still active,” Lepage says. But as Hubble aged, Lepage’s charge began to change, and the Webb project began to dominate the pristine space instead.

“James Webb started bringing in their hardware little by little,” she says.

In 2016, Lepage left NASA, but she didn’t leave the James Webb. She started her own consulting company, which provides contamination control support for some of the most historic space missions.

The James Webb Space Telescope left Maryland in 2018 and out of Lepage’s care. She is watching as the telescope continues to take shape in another giant cleanroom at NASA contractor Northrop Grumman’s cleanroom in Redondo Beach, California. However, she’ll be back with the Webb telescope, as part of the pre-launch cleanroom team, in September.

Why stop germs, dirt, and other particles from Earth from going into the void of space in the first place?

The answer breaks down into two parts:

Dust is not a good look.

Industrial cleanrooms are the final stop for any spacecraft before they are sent into the cosmos.

Telescopes are sensitive to two main kinds of contamination — particle and molecular contamination. This isn’t an idle threat: Remember when scientists thought they’d found evidence of gravitational waves back in 2014 and then had to backtrack after it turned out the signal was actually dust on the detector? Not a good look.

You have likely experienced the irritating effects of this yourself — albeit on a far smaller lens than a telescope.

“A good example of this is if you wear glasses, and you were to smudge your finger on your lens,” Lepage says. “Oil from your finger would get on your lens, and then you can’t see very well.”

Each engineer spends about 15 minutes cleaning themselves before they go into the room. They put on sterile bodysuits, gloves, boots, head covers, and face masks with tightly woven fabric to keep particles drifting from their bodies or clothes and settling on the hardware.

“The cleanroom itself will be partially pressurized, so there’s air pressure inside that pushes out any leaks or penetrations in the wall or whatever it may have,” Lepage explains, “so that particles from the outside wouldn’t migrate into the cleanroom.”

The process gets even more complex as the telescope comes together — the mirrors are in a Northrop Grumman cleanroom facility in Redondo Beach, California. Engineers assembled other parts in a NASA cleanroom facility in Maryland. And it still all has to get shipped to French Guiana for the launch. At every stage, it must be pristine.

There is a second reason why scientists are so anxious to keep Earth’s dirt out of space, however.

As humans send more and more spacecraft into orbit and even further afield in the Universe, it becomes increasingly critical to consider whether or not we may be inadvertently contaminating space with our germs, microorganisms, and other Earthly grime that could sully the truth about what is out there.

Mars, for example, is a popular planetary target for space missions. And since scientists believe that Mars may be capable of supporting life, it is important to make sure that no hardware traveling to the Red Planet carries any biological material from Earth. Just imagine: Perseverance finds evidence of life on Mars! But psyche! It turns out it was escaped tardigrades.

In the case of the Webb telescope, the stakes are a little lower. The telescope isn’t landing on any terrain.

“It's going to be in the vacuum of space,” Lepage says.

“I don’t know what would live in the vacuum, and maybe there are some bacteria that can lay dormant. I’m not entirely sure.”

There is some evidence that tardigrades, a tiny creature that looks like a minuscule, fat bear, can survive in the vacuum. But the idea of creatures like these somehow surviving space and then making it all the way to land on another extraterrestrial body?

What’s next — The James Webb Space Telescope is currently slated to launch at some point in December 2021. It will launch from Arianespace’s ELA-3 launch complex at European Spaceport located near Kourou, French Guiana.

Lepage and other contamination control engineers will be getting there early to set up a cleanroom on-site to house the telescope once it arrives in French Guiana before the launch.

“I am going to be part of the team of individuals going down to French Guiana,” Lepage says. “That may begin sometime in September.”

“Right before launch, there is a final checkup,” she adds, although she won’t be directly involved in that part of the operation.

The James Webb Space Telescope, at its current pace, is coming in the nick of time — the Hubble Space Telescope, which has transformed humanity’s ideas of the cosmos, will begin to decay as soon as the next decade. Currently, it is suffering: On June 13, NASA suspended science operations due to a possible issue with the telescope’s payload computer.

Lepage, for her part, is confident humans will continue to persevere and keep learning about space with the James Webb Telescope.

It will “rewrite astronomy books,” she says.

UPDATE: This article has been changed to reflect a new intended launch date in December 2021 instead of October.