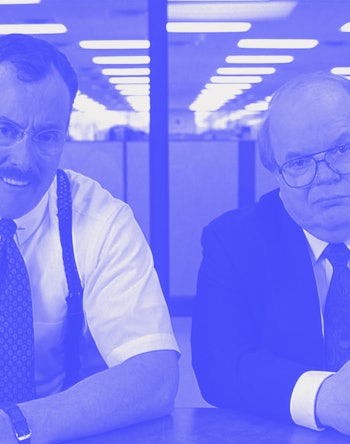 Desmond Hardy describes his former sales representative job as having a “Lord of the Flies type culture.”

Hardy, a 41-year-old who lives in Georgia, recalls the first sign that something was very, very wrong: members of the company leadership would make fun of and share embarrassing details about the leaders of their partner companies.

“I knew that was a sign of the lack of professionalism that employees would be subject to as well,” Hardy tells Inverse.

He was right. As a new hire who had been out of the industry for a decade, Hardy was never given the support he needed — despite being told it would be there. “My manager would often remark to my peers and superiors how out of date I was,” Hardy says. Going to work soon induced “full-fledged panic.”

Toxic workplaces, epitomized by Office Space, are more than just a pop-culture punchline. All too real, they can cause considerable damage to employees’ mental health and productivity — and men may be most at risk. A June 2021 study suggests “toxic” companies that don’t prioritize workers’ mental health needs increase the risk of employee depression by 300 percent. This was particularly true for men, the researchers reported.

When a harmful environment is the norm, it can be hard to realize just how bad it is, how much it’s affecting you, and when it’s time to leave the job. Luckily, experts say there are clear signs to look for that indicate that your workplace is a toxic one.

Furthermore, while bosses often drive a toxic workplace, you may be able to influence them by taking one actionable step. You don’t have to put up with a toxic environment — here’s how to start.

Is your workplace toxic?

A toxic workplace can be defined as “one where people at the bottom are experiencing corrosive pressures, and these corrosive pressures are draining them and making them want to leave,” according to Wharton management professor Nancy Rothbard.

Those corrosive pressures can include ridicule, competition, unreasonable demands, and a host of other factors. Ultimately, these factors combine to become abusive and harmful to the employee’s mental health.

“Everyone would come in on a Saturday for no particular reason.”

In the June 2021 study, the researchers use a metric called psychosocial safety climate (PSC), which can be loosely defined as a measure of how psychologically safe and supported a person feels in the workplace. They found that “the inverse relationship between PSC and major depression symptoms was stronger for males than females.”

In other words, while toxic masculinity is known to fuel toxic workplaces, men are also most likely to suffer.

Toxic workplaces don’t arise out of thin air, they’re created by people. Stanley Silverman, Dean Emeritus and Professor Emeritus at The University of Akron and President of Human Resource Decisions, Inc., tells Inverse the adage about the fish rotting from the head is true.

“When you have an arrogant, toxic leader at the top of the organization, people at the lower levels think that’s what success looks like and try to model that behavior,” he says. “That creates a dysfunctional, toxic workplace.”

James Marrugo, a therapist who works with high achieving men to manage stress and anxiety due to work performance, agrees.

“Leaders who are preoccupied and lack empathy are typically the ones to create toxic work environments,” he tells Inverse.

Three signs of a toxic workplace

Toxic workplaces come in all shapes and sizes, but Silverman points to three common red flags.

1. High turnover: People leave toxic environments. Whether it’s because the toxicity degraded an employee’s mental health over time or because someone simply doesn’t want to work amidst the stew of bullshit, one way or another, they leave.

2. Performative competition: Silverman says he’s consulted for companies where there’s a competition to appear to be working harder than everyone else. This, in turn, can create a toxic environment.

In the case of one company, he says, “Everyone would come in on a Saturday for no particular reason — they didn’t have any work they needed to get done. But they knew the Vice President of the company would be there and they wanted him to see them working on the weekend.”

3. Workers are scared to talk to other workers: When a workplace is toxic, communication breaks down. “If everyone in the company is actively avoiding one another, that is a strong sign of a toxic workplace,” Marrugo says.

Not everyone views a workplace the same way. Someone might thrive in a performatively competitive environment. Ultimately, you have to determine if an environment is harmful for you.

“Plenty of people work jobs they do not care for and happily stick around due to good and effective leadership,” Marrugo says.

If you dread going to work every morning, it’s a sign that work has become a toxic place to you, he says.

“Dread” is precisely how Hardy describes how he felt before going to work.

“I dreaded going to work and dreaded receiving emails because I didn't know if the next unscheduled meeting invite was an ambush meeting from my supervisor,” he says.

Even Outlook’s pinging noise signaling an incoming email sent him into a “Pavlovian fight or flight response.”

How to change a toxic workplace

Bosses have the most power here. But you may be able to influence your boss to create a better workplace. The best way to do this is through anonymous feedback, Silverman says.

“If you have an arrogant boss, you’re not going to sit down with them and tell them the ways their arrogance is negatively affecting you because that’s only going to exacerbate the situation,” he says. “But if it’s done anonymously, it can really open the toxic leader’s eyes.”

Toxic workplaces aren’t always the result of malicious or unreasonable bosses. Sometimes bad habits develop and grow without the person in charge realizing it. Anonymous feedback can serve as a wake-up call to well-intentioned bosses that something needs to change.

“Leaders have to be willing to create the kind of climate where the people who work for you feel comfortable telling you what you need to hear. Not what you want to hear,” Silverman says.

When to leave a toxic workplace

The first thing you should do is reach out to your Human Resources department to see if there’s anything they can do to help, says Marrugo.

Counseling can also help, as there are counselors who specialize in work-related challenges.

If you think leaving would benefit your mental health, Marrugo suggests you “talk to your counselor about leaving and come up with a game plan.”

Everyone’s mental health and financial situations are different. Some people might be in a position to wait and look for another job while they’re still in the toxic environment, others might need to get out sooner. A therapist or counselor will be able to discuss your specific situation in detail and help you figure out what’s best for you.

“The day I submitted my letter of resignation felt like the first time I could exhale.”

For Hardy, the situation became bad enough that he needed to leave for his mental health — despite not having another job lined up. It wasn’t easy. He spent several months unemployed and suspects the surge of unemployment claims that occurred during the pandemic is why he never got unemployment benefits.

“It hurt financially,” he says, “but the emotional and physical benefits of leaving that culture were worth it. The day I submitted my letter of resignation felt like the first time I could exhale.”

He eventually found another job he’s enjoying because he feels like he’s “on a team with professionals who are highly capable and supportive.”

Going to work every day in a toxic environment is truly awful. But if that’s the case, you have options and it’s worth it for your mental health to explore all of them.