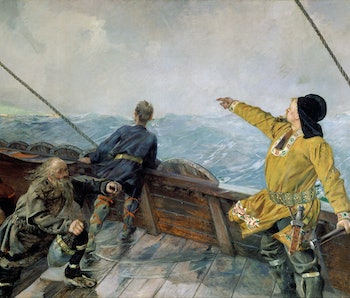 Vikings, primordial life, exploring Mars, and fixing the worst thing about an iconic board game: It must Inverse Daily on a Friday, y’all. Let’s go down the rabbit hole.

This is an adapted version of the Inverse Daily newsletter for Friday, December 3, 2021. Subscribe for free and earn rewards for reading every day in your inbox. ✉️

Leif Erikson, son of Viking explorer Erik the Red, was many things — an explorer in his own right, he played a starring role in 10th century Norse geopolitics. But he was also a profoundly religious man. And like so many explorers with designs on settling new lands, he wanted to bring his religion, Christianity, along for the ride.

Specifically, he wanted to bring Christianity to Greenland — but ended up being the first European to set foot on American soil instead. At least that’s how the story goes... and now the science goes that way, too.

This unexpected force may be responsible for life on Earth

Luke Daly wants you to think about the Sun every time you drink a glass of water.

“There’s a little bit of sunshine in that glass of water,” Daly tells Inverse.

Daly, a professor at the University of Glasgow’s School of Geographical and Earth Science, and an international team of researchers recently suggested that it wasn’t just space rocks that seeded the Earth with water. Still, solar winds played a significant role as well.

In 1803, Toussaint Louverture, a free Black man from the Caribbean, defeated one of the most influential world leaders ever known: Napoleon Bonaparte.

Outmaneouvering the great general, Louverture forced Napoleon’s army out of the French colony of Saint-Domingue and established himself as the de facto ruler of Haiti's new, free state.

Some 200 years later, game creator Damon Stone is facing an almost equally formidable challenge. His goal? Translate Louverture’s incredible victory over the French into Liberation-Haiti, the anti-colonialist answer to dominant board games like Risk and Settlers of Catan.

50 years ago, Russia landed on Mars for 15 seconds — and taught America a lesson

There’s really no dressing it up: 1971 was a crummy year for the Soviet Mars program. Of the four robotic spacecraft the USSR sent toward the Red Planet that year, one never made it out of Earth orbit, Martian dust storms hampered two, and another crashed into Mars like a speeding bullet.

But the Mars 3 lander had better luck. Somewhat.

That’s it for this Friday edition of Inverse Daily! Facetime an old friend this weekend.

More like this
Science
8.10.2022 3:00 PM
Asteroids may have carved Earth's landforms as we know them — study
By Doris Elín Urrutia
Science
2 hours ago
45 years ago, the first Space Shuttle made history without going to space
By Allie Hutchison
Science
8.8.2022 12:00 PM
Look! Extreme Tonga volcano eruption leaves a telltale finger-print in space
By Doris Elín Urrutia
Related Tags
Share: