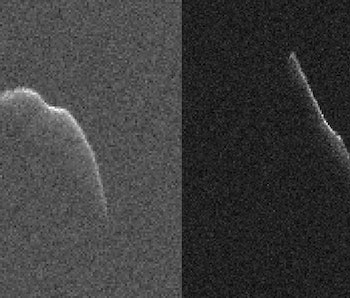 An asteroid is headed towards Earth, wobbling its way to our planet like a football thrown across the universe.

Asteroid 2003 SD220 is a highly elongated, tumbling space rock three times as tall as the Empire State Building and almost as tall as Dubai’s Burj Khalifa (the tallest building in the world). The asteroid is making its closest approach on December 17, where it will come within 3 million miles of Earth. That’s about 14 times the distance between Earth and its Moon.

But not to worry, that’s not close enough for it to cause any damage to Earth.

Samuel Courville, a researcher at Arizona State University’s School of Earth and Space Exploration, puts it in an Earth-friendly scale.

Although it poses no threat to us today, asteroid 2003 SD220 is still considered potentially hazardous because of its relatively close proximity to our home planet.

“So this little guy is most of the time,” Courville says. “And so that means it crosses the Earth's path, that’s what makes it potentially hazardous because if it never crossed the Earth then there's absolutely no chance of it ever hitting Earth.”

So while asteroid 2003 SD220 is potentially hazardous, it’s practically harmless.

“It still comes a lot closer than a lot of other asteroids,” Courville says. “But because we know its orbit so well, we’ve actually classified its risk as low to zero.”

The asteroid was first observed in the year 2003 by scientists at the Lowell Observatory Near-Earth Object Search in Arizona.

Therefore, scientists have gotten a pretty good look at this asteroid every three years.

From observations, the asteroid measures at about 3,600 feet long. That makes it a highly elongated asteroid, almost three times as tall as the Empire State Building.

The asteroid is considered a part of the Aten group, a group of asteroids that orbit the Sun between Earth and Venus.

Asteroid 2003 SD2002 also has a distinct rotation, and is known as a tumbling slow rotator whereby it spins on its axis rather awkwardly.

“This asteroid’s tumbling,” Courville says. “It doesn't rotate, it's kind of just fumbling all over the place, like when you drop a football or something.”

But this long, awkward asteroid has served scientists well with its observations over the years. Each time it has gone by Earth, astronomers were able to capture clear radar images of the asteroid and observe its orbit.

And that’s significant for two reasons, according to Courville.

NASA's Near Earth Object program puts together a list of asteroids that swing by our Solar System, and calculates the likelihood of an impact with Earth for each of them over the next 100 years.

The space agency also recently launched its DART mission, which will crash into an asteroid to see if the impact from the spacecraft can deflect its orbit.