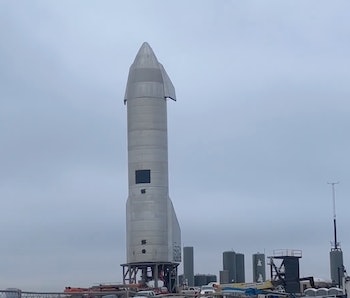 SpaceX is gearing up for its next major test launch, and video footage shows the impressive SN10 prototype ahead of an expected test fire, possibly next week.

On Friday, NASASpaceflight shared footage via its YouTube channel of SpaceX making progress at its Boca Chica facility in Texas, which broke ground in 2014 and now serves as the Starship development site. SpaceX is using the facility to build prototypes of the Starship, its heavy lift rocket designed to send humans to Mars and beyond.

Road closures suggest the prototype could undergo a static test fire as early as Monday, February 22 — a step normally taken before a full-scale launch. The video was captured by NASASpaceflight photojournalist Mary, who goes by the username “BocaChicaGal.”

Want to know more about SpaceX's plans for Starship? Subscribe to MUSK READS+for exclusive interviews and analysis about all things Musk.

The firm is working to fly SN10 soon. During the SN9 launch on February 2, SpaceX livestream host and principal integration engineer John Insprucker claimed the plan was to fly SN10 later in the month.

The planned flight is an important step in Starship's development. SpaceX CEO Elon Musk unveiled the first full-size prototype of the ship at an event in September 2019. The firm has hosted two high-altitude tests with these prototypes, in December 2020 and this month, both of which ended in flames — the most recent, where the ship crunched into the ground at a skewed angle, was captured in slow motion footage. SpaceX's goal will be to launch SN10 and land it in one piece.

"Success on landing probability is ~60% this time," Musk wrote on Twitter on February 14.

The video shows how SpaceX's work is ongoing as power outages hit the state. It shows SN10 standing tall, a future SN11 alongside a BN1 booster in the high bay, and a NASA-branded nosecone that may play a role in the firm's work with the agency. The video also shows construction workers around the planned orbital launch site, expected to support future missions.

Evidence suggests the test has been delayed multiple times. NASASpaceflight journalist BocaChicaGal, who lists their location unsurprisingly as Boca Chica, shared a letter on February 17 that SpaceX would conduct activities in the area that day, indicating a static test fire. The FAA had posted temporary flight restrictions for February 19, 20, and 21, but they were later withdrawn.

Road closure listings shared by BocaChicaGal for February 22, 23, and 24 suggest SpaceX could host a static test fire of "SN10" next week. Teslarati reported Friday that SpaceX had agreed with Cameron County not to close roads on the weekends.

SpaceX failed both previous Starship landings for different reasons. The first flight, in December 2020, reached an altitude of 12.5 kilometers (41,000 feet) before crashing into a ball of flames.

After the launch, Musk explained that the issue was that one of the fuel tanks lost pressure. The Starship uses liquid oxygen and methane as its fuel, and it stores launch and landing fuel separately to make four tanks total. The methane header tank lost pressure in the December launch, so Musk outlined a plan to add pressure using helium.

For the second flight in February, SpaceX reached 10 kilometers (32,800 feet) before crashing to Earth at a skewed angle instead of upright as expected. After the flight, Musk responded to a question on Twitter about why the ship only lit two of its three engines: "We were too dumb." Musk later clarified that the firm plans to ignite all three engines for the SN10 landing and switch off two as needed.

The Inverse analysis — SpaceX will want to improve on its first two flights, which made headlines for their fiery ends. But amid blackouts and snowstorms, it seems the firm has pushed back its testing schedule.

A third failure is unlikely to put an end to the Starship project. As Musk likes to note, SpaceX took four attempts to reach orbit. After the firm completed the SN11 prototype earlier this month, it may not be long before a further attempt.