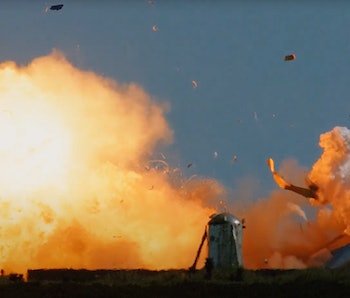 What goes up must come down — but some descents are more successful than others.

On Tuesday, SpaceX launched the "SN9" prototype of its Starship rocket, the fully-reusable ship designed to send humans to Mars and beyond. The launch was held at the firm's site in Cameron County, Texas.

Want to dive deeper on where Starship is going next? Subscribe to MUSK READS+ for exclusive interviews and analysis about all things Musk.

Ryan Chylinski, co-founder of Cosmic Perspective, tells Inverse he and his team were on a hotel balcony on South Padre Island during the launch — around five miles away.

“We could certainly feel the rumble of the Raptors [the craft's engines] at this distance," he says.

"And that explosion shockwave, wow!” he adds.

Although the explosion seems like a failure, SpaceX's livestream host was buoyant. They said it was "another great flight" up to high altitude, praised the ship's ability to switch its engines to use landing propellant, and said the subsonic re-entry "looked good."

"We've just got to work on that landing a little bit," the host said, without hint of irony.

"But we'll find out from the team as they go through the data," how to do that, they said.

Watch the full, fiery flight below:

This is the second high-altitude flight for a Starship prototype, and the second to end in dramatic fashion. The first flight with "SN8" took place in December 2020. The ship reached a height of 12.5 kilometers, or 41,000 feet, before erupting in flames upon return.

The Starship is SpaceX's most powerful rocket yet, with the ability to send over 150 tons or 100 people into space at a time. The ship uses liquid oxygen and methane as its fuel, unlike rockets like the Falcon 9 that use rocket propellant. That, combined with its fully-reusable design, means astronauts will be able to fly to Mars, refuel with the planet's resources, and either return home or venture out further to establish a planet-hopping network.

After the December flight, SpaceX CEO Elon Musk said the flight ended in flames because the pressure in the fuel header tank was low. The ship keeps propellant for launch and landing in separate tanks. The methane header tank, used for landing, is stored inside the main tank. Musk explained that, after December's mishap, the team would pressure the tank with helium.

Given the supposed tweak, it's unclear at this stage why Tuesday's flight failed. SpaceX's host explained the team was "in contact with telemetry all the way down" — so they may be able to use instrument data to suss out the problem.

Both test flights showed the ship demonstrating a belly-flop maneuver. This is designed to slow the ship down as it arrives on Mars. Musk explained in September 2018 how the ship will enter more like a skydiver than an aircraft, slowing itself down as it enters the Martian atmosphere at speeds of up to 16,777 mph.

Curiously, sat next to "SN9" on Tuesday was the prototype "SN10." During the livestream, SpaceX confirmed the ship is planned for a flight later this month.

The Inverse analysis — Failures are never desirable, but they don't mean the end of a project. SpaceX took four attempts to first reach orbit with its Falcon 1 rocket, which it first achieved in 2008. Musk mentioned this stat when Virgin Orbit first failed to reach orbit in May 2020. Virgin Orbit's second launch, on January 17, successfully launched 10 payloads for NASA.

Falcon 1 had just under two months between its third failure and first successful launch. With "SN10" preparing for a launch later this month, SpaceX may get another attempt even sooner.