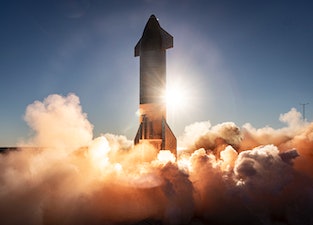 SpaceX Starship: watch the SN9 prototype fire its engines ahead of launch

The Starship, SpaceX's in-development ship designed to send humans to Mars and beyond, is about to take on its biggest challenge yet.

On Wednesday, the "SN9" prototype of the ship successfully completed a static test fire ahead of a planned test launch. These firings, a regular feature of rocket launches, hold the rocket down as it fires its engines to test the on-board systems. Space.com reported that the firing was completed at 5:07 p.m. Eastern time at the Boca Chica facilities in Texas.

Want to dive deeper on where Starship is going next? Subscribe to MUSK READS+ for exclusive interviews and analysis about all things Musk. Members receive instant access to our ever-expanding archive, including deep dives on SpaceX rival Rocket Lab and Hyperloop’s start date, plus future issues directly to your inbox twice per week. Don’t miss out.

The firing precedes an expected launch test, which could represent a major step forward for the project. SpaceX has sent prototype models of the ship to increasingly higher distances, with the end goal of sending a ship into orbit. The firm sent miniaturized "Starhopper" models measuring around 60 feet tall and 30 feet wide to a height of around 500 feet in August 2019. In 2020 it sent full-size prototypes measuring 160 feet tall to the same height.

Watch NASASpaceflight's video of the static fire below:

SpaceX's next launch is expected to improve on the one in December. That sent the "SN8" prototype to a height of 41,000 feet, soaring for six minutes and 42 seconds before landing on the pad and ending the flight in flames.

An improvement, naturally, would be if the ship doesn't end its flight on fire this time.

SpaceX Starship: what is the launch date and plan for SN9's flight?

The "SN9" is expected to fly no earlier than Friday, January 8. CNBC reporter Michael Sheetz shared documents from the Federal Aviation Administration on Tuesday, which show windows for flights on the 8th, 9th and 10th. Note that this does not mean a flight will definitely occur, and it could be cancelled or "scrubbed."

How high will it fly? The "SN8" ship flew to 41,000 feet or 12.5 kilometers last month. Sheetz wrote that the agency directed his questions on this to SpaceX. While the documents cover flight restrictions "from the surface up to unlimited," the agency explained that this was just to show that the airspace above is closed.

It's entirely possible that SpaceX flies to a different height. The "SN8" prototype was expected to fly to 15 kilometers, but five days before the flight the target had been changed to 12.5 kilometers.

Check out Cosmic Perspective's video this week that shows "SN9" rolling out into position:

Hopefully not. CEO Elon Musk was notably upbeat after the "SN8" launch, suggesting that basically everything had gone well bar a small issue: the fuel header tank pressure was low during the descent.

The Starship prototype is powered by three Raptor engines, while the final model will be powered by six. Unlike the Merlin engines, which use rocket propellant to fly, these engines use liquid oxygen and methane as fuel.

The Starship has main tanks for liquid oxygen and methane, but Musk confirmed in 2017 that the ship also has two header tanks to store fuel for landing. The landing fuel is critical to transform the Starship into a fully-reusable rocket, as it can reduce its speed as it comes toward land. The two fuels are separate, Musk explained at the time, for benefits like greater insulation — these fuels need to be extremely cold to avoid becoming gas.

The liquid oxygen header tank, Musk explained in February 2020, is at the tip of the nosecone. The liquid methane header tank is in the main tank.

To stop the methane header tank from losing pressure this time, the team will pressure the tank with helium. It's unclear what SpaceX will use as a long-term solution. With rockets, every bit of added mass means more power required to move the same amount of payload.

SpaceX Starship: why is Elon Musk's firm developing the rocket?

The Starship is designed to enable SpaceX's most ambitious missions. It's fully reusable, meaning the ship can be used repeatedly to reduce the costs of spaceflight. It's powerful, capable of carrying 100 people or over 150 tons into space. It's designed to replace existing ships like the Falcon 9 and Falcon Heavy, while also enabling more ambitious trips like a crewed mission to Mars.

Musk wants to build a city on Mars by 2050. The Starship is the ship that could enable this dream to become a reality.

More like this
Innovation
Jan. 25, 2023
Starship orbital flight: SpaceX successfully loaded the rocket with over 10 million pounds of propellant
By Mike Brown and Molly Glick
Science
Feb. 5, 2023
60 Years Ago, Astronomers Cracked the Mystery of the Brightest Objects in the Universe
By Allie Hutchison
Science
Feb. 3, 2023
Snow Moon 2023: You Need to See February's Bright Full Moon This Weekend
By Jeff Nagle
LEARN SOMETHING NEW EVERY DAY.
Related Tags
Share: