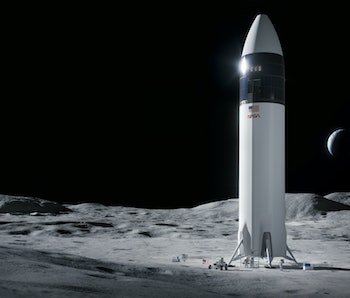 After a heated competition, NASA chose a SpaceX rocket to land its astronauts on the Moon for the first time in 45 years. A series of concept images may reveal why the Elon Musk outfit won the high-profile contract.

On Friday, April 16, the agency announced that it had awarded Elon Musk’s firm a $2.89 billion contract to continue developing the first commercial lunar lander. The firm’s proposal, outlined last year, uses the fully-reusable Starship rocket currently under development at SpaceX’s Texas facility. The ship will be used to transport two astronauts to the surface of the Moon.

“NASA rules!” Musk wrote in response to the news on his Twitter page. “We are honored to be part of the NASA Artemis team.”

Want to dive deeper on where Starship is going next? Subscribe to MUSK READS+ for exclusive interviews and analysis about all things Musk.

The news is a big endorsement of SpaceX’s ambitious plans for Starship. The rocket’s predecessor, known as BFR, was first outlined by Musk at a September 2017 conference. Starship is designed to be a fully reusable rocket, capable of sending over 150 tons or 100 people into space at a time, with the ability to replace all of SpaceX’s existing rockets.

NASA has chosen the rocket to work as a lunar lander on its missions. The agency will launch four astronauts using an Orion spacecraft launched into space by the Space Launch System rocket. The capsule will travel for several days before reaching a lunar orbit.

Once it reaches the lunar orbit, the capsule will rendezvous with SpaceX’s Starship to enable two astronauts to transfer between the ships. The lucky pair will spend around one week on the Moon’s surface before boarding the lander and returning to the Orion spacecraft.

“By taking a collaborative approach in working with industry while leveraging NASA’s proven technical expertise and capabilities, we will return American astronauts to the Moon’s surface once again, this time to explore new areas for longer periods of time,” Lisa Watson-Morgan, program manager for HLS at NASA’s Marshall Space Flight Center in Huntsville, Alabama, said in a statement.

SpaceX’s proposal, outlined at the time, detailed a lunar variant of the Starship complete with NASA logos emblazoned on the cone. The proposal highlighted a “spacious cabin” for the astronauts and two airlocks for exploring the Moon.

In June 2020, Musk also explained that moon-bound ships would use new legs with a wider stance for landing on the rocky surface. It would also drop extras like heatshields and flaps, less important for missions to the Moon, to increase the amount of payload the ship can carry to the surface.

The newer concept images stand in stark contrast to an earlier one shown in November 2019, which show a more complex Starship with the aforementioned flaps:

A version of the Starship with the NASA logo was spotted at the Texas facility in October 2020:

How does the SpaceX Moon mission lunar lander work?

The setup would use multiple Starships to complete the mission. A Starship designed to store propellant will stay in low-Earth orbit, where it will provide extra fuel for Starships to complete their journey. The ship that will transport humans to the Moon’s surface will launch from Earth, refuel using the propellant-storing Starship, and continue its journey to lunar orbit.

Starship cislunar and interplanetary missions will use the Super Heavy booster to provide the necessary power to leave Earth’s gravity.

NASA had the option to choose two designs for the 2024 mission but has instead decided to fully commit to SpaceX’s proposal.

While the Starship will be used for transporting humans between the Moon’s surface and lunar orbit, SpaceX has much bigger goals in mind. It plans to develop the ship further to send the first humans to Mars. Its use of liquid oxygen and methane as a fuel means astronauts could visit Mars, refuel using the planet’s resources, and either return home or venture out further.

SpaceX has also produced concept art of a Starship arriving at a potential future lunar base:

With Mars on the horizon, the Moon may be just the beginning.