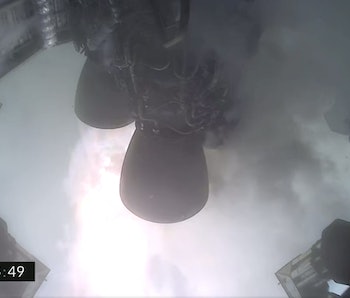 Starship, SpaceX’s most ambitious rocket, will someday get us to Mars. But first, it needs to make it through a test flight.

On March 30, a test flight of the rocket went up in flames. The SN11 vehicle went up successfully, but soon after, something went awry. Details were scant, with SpaceX principal integration engineer John Insprucker remarking simply during a webcast the cryptic words, “Starship 11 is not coming back.”

“Don’t wait for the landing.”

Why did the SpaceX SN11 rocket explode?

It may be hard for the SpaceX team to assess quite what happened. Insprucker says that SpaceX lost all data from the vehicle in the explosion.

One reason this may be especially hard? The rocket was launched on its 6-mile test flight on a fog-enshrouded morning at the company’s Boca Chica, Texas facilities. Data from the spacecraft would have been essential in assessing any flight problems.

The SpaceX live stream showed a successful launch, but the stream abruptly froze.

Elon Musk, SpaceX’s CEO and CTO, has his own ideas on what might have happened.

“Looks like engine 2 had issues on ascent & didn’t reach operating chamber pressure during landing burn, but, in theory, it wasn’t needed,” he tweeted.

Examination of the wreckage may be the key to determining what happened.

“Something significant happened shortly after landing burn start,” Musk says. “Should know what it was once we can examine the bits later today.”

A live stream from NASA Spaceflight (unaffiliated with the agency) didn’t show much — but you could hear a loud explosion during its stream.

How many times has SpaceX Starship exploded?

This is the second explosion for the rocket this month. The SN10 launched on March 4 and landed successfully. But not long after, it burst into flames. A leaky valve may have been to blame.

The Starship fleet has yet to make a wholly successful flight — but given that it’s still a prototype, that’s to be expected. The testing process for rockets is always challenging, and SpaceX saw its fair share of failures in Falcon 9 launches before it became the vertical landing machine that has gone up, up, and up again.

The firm is targeting an orbital test in July.

What’s next for the SpaceX Starship?

Starship is still actively under development. In a tweet, Musk says that the company’s next launch, SN15, has a host of updates at the ready for the next launch. These include design tweaks, software updates, and engine modifications.

“Hopefully, one of those improvements covers this problem,” Musk says. “If not, then retrofit will add a few more days.”

The SN20 rocket will have the first major upgrades. They’ll be necessary to get the rocket up to orbital tests — and to have the rocket survive the experience.