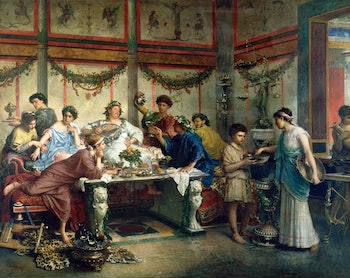 Food is an essential part of the human experience yet it is ephemeral, made to be consumed. So like many fleeting moments, we document it — on the ’gram, in TikTok videos, on TV shows, and in recipe books. But the reason why pasta and cronuts go viral is older than TikTok or social media in general. It’s downright ancient.

Using a veritable cobb salad of technological innovations and new chemical analyses of ancient pottery, bones, and ruins, archaeologists are getting inside some true “ghost kitchens” and discovering how ancient cuisine evolved over thousands of years to create the food cultures we know today.

Basically, if you want to eat like an Ancient Roman, then read on.

Why it matters — Discovering the roots of “good taste” is a little more complicated than tracing your family’s bolognese recipe back through the generations. Rather, what makes it on the plate acts as a lens for historians to better understand how different ancient civilizations developed, thrived, and even how they fell. Food, in some ways, is a measure of power.

The health and dietary needs of people caught in different situations and facing different environmental pressures can also be understood by looking at what they ate.

What someone ate in a Roman metropolis and what another ate in a Levantine coastal town was not necessarily the same, after all.

This legacy adds a little extra seasoning to our food obsessions today — and offers up new ideas for culinary experimentation.

The medieval Sicilian kitchen — Like that bolognese, nonna might claim her caponata has a storied history, but who is to say that medieval society in Sicily ran on arancini and cannolis?

In a study published this month in the journal PLOS ONE, scientists took a close look at the materials left on 134 pieces of ceramic pottery from medieval Sicily. They wanted to know what these trace elements could reveal about the island’s period of Islamic rule between 900 and 1200 A.D.

Using a process called residue analysis, the team studied the chemical remnants of food left ingrained on the cookware to see how diets — and in turn, religion — may have varied between urban and rural Sicilians.

“This is the first time organic residue analysis of ceramics has been used to explore foodways in a medieval multi-faith society,” the authors write in the paper.

“[It] offers new pathways to the understanding of pottery use and resources that were prepared, consumed and combined, reflecting cuisine in different socio-economic environments within the pluralistic population of medieval Sicily.”

By comparing isotopes left from fats detected on the ancient dirty dishes and present-day foods used in both Arabic and Italian cuisine, such as eggplant, the researchers draw some important conclusions:

One interesting finding from this study home cooks today can identify with is the evidence to suggest fruit juice was added to dishes of meat or veggies. Perhaps medieval Sicilians were just as into plum sauce with duck, or, a spritz of lemon on their salad, as modern foodies are today.

How these culinary differences reflect Sicilian culture and religion at the time is hard to say, but it does offer up tantalizing avenues for further investigation.

“Analysis of residues preserved in pottery has, for the first time, revealed important insight into cuisine in medieval Islamic Sicily,” the authors write in a statement.

“We have identified a diverse range of products processed in cooking wares, as well as regional differences in the use of ceramics such as for the processing of dairy and grapevine products.”

If teeth could talk — When buildings and pottery have all crumbled away, sometimes the only primary material left to look at when it comes to ancient diets are people’s teeth themselves.

For example, in a January 2021 PNAS study, researchers analyzed “dental pulp” preserved in the molars of 16 ancient Mediterraneans to reconstruct their daily diets.

Christina Warriner, assistant professor of Anthropology and study co-author, told Inverse at the time the food debris found in these teeth revealed more than the person’s tastes — but also that there must have been a worldwide trade in foodstuffs — and cultural cuisines — in the ancient world.

“Today, it is hard to imagine Levantine cuisine without sesame-based foods like tahini, but sesame was originally an import,” she says.

“We are now starting to understand how and when the diverse components of iconic cuisines came to be.”

This study also identified the earliest known evidence of humans consuming turmeric in the Levant — today, turmeric cake, or sfouf, is a popular Middle Eastern sweet.

Pompeiian fast-food stands — Some scientists have had the privilege to analyze full pieces of restaurant decor — perhaps the best, and clearest, examples can be found at Pompeii. Soon, new technologies will be able to tell us even more about what these Ancient Roman citizens ate — and how we might recreate it at home.

In 79 A.D., volcano Mount Vesuvius erupted, and just as abruptly, the bustling city of Pompeii was entombed in several meters worth of ash and rock.

As we said before, how people eat often tells you most about how they lived, and Pompeiians lived large. Pompeiians loved their fast food. The city had at least 80 fast-food stands, but this latest example was the first to be excavated in full.

In a discovery announced in 2020, archaeologists uncovered stone slabs bearing paintings of roosters and other birds — incredibly, this tableau may have belonged to an ancient version of a Kentucky Fried Chicken.

Back then, fast-food snack stands like this one would have been called a “thermopolium” — this one was called Thermopolium of Regio V (Reggie’s Place to those in the know...).

By comparing the bones and shells found at the snack stand to the paintings depicted there, researchers were able to determine various dishes on the menu:

Future analyses of these and other remains at the site are still forthcoming, but researchers will likely use technology like isotope analysis or spectrometry (such as this handheld probe) to learn more about the daily life of this long-gone snack shack.

Massimo Osanna, then interim director general of the Archaeological Park of Pompeii, said in a statement at the time the finding was announced that the discovery gave an important “insight into daily life at Pompeii.”

“The finds will be further analyzed in the laboratory, and in particular those remains found in the dolia (terracotta containers) of the counter are expected to yield exceptional data for informing an understanding of what was sold and what the diet was like,” he says.

More like this
Science
6.25.2022 4:00 PM
Voyager: 12 spectacular images from NASA's longest-lasting mission
By Jennifer Walter
Mind and Body
7.2.2022 3:00 PM
Why does spicy food make you sweat? A neuroscientist breaks it down
By Elana Spivack
Culture
6.26.2022 12:30 PM
40 years, The Thing set a new standard for sci-fi thrillers — and accidentally inspired a modern movement
By Andy Crump
Related Tags
Share: