“This study is thinking about humanity itself, what makes us work and what doesn't.” 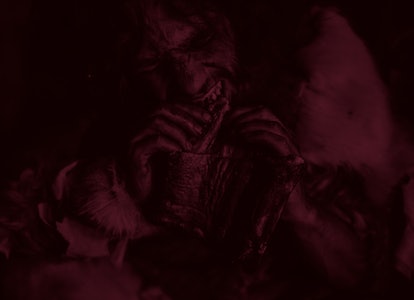 The mountain of evidence that microbes inside our guts can reveal hidden details of our physical and mental health has grown a little more thanks to a new study published this month in the journal Communications Biology.

This time, scientists investigated just how similar ancient people's gut flora may have been to the modern human gut microbiome.

The gut microbiome refers to the diverse community of gut microbes inside our gastrointestinal system. To decipher how these communities have changed over the course of human evolution, scientists studied fecal samples from one of our ancient hominin relatives — Neanderthals — to reconstruct their gut microbiome and their diet. According to researchers, these may be the oldest fecal samples ever identified belonging to a species of human.

“This research is really speaking about what [fecal data] can tell us about humanity in general.”

Check, please is an Inverse series that uses biology, chemistry, and physics to debunk the biggest food myths and assumptions.

Why it matters — The idea behind this research is to understand what defines the "core human microbiome," and understand how our changing environment may in turn affect these gut biota.

Stephanie Schnorr is a co-author on the study and post-doctoral researcher at the University of Nevada, Las Vegas who studies how the human diet and gut microbiome relate to evolution.

She tells Inverse that more than simply being gut health "inspo" for aspiring paleo dieters, the research could help us learn something fundamental about the evolution of humans, and the symbiotic relationship we have with our environment.

"This research is really speaking about what [fecal data] can tell us about humanity in general," says Schnorr. "It's speaking to something larger and greater than just the ancestors of [westernized] people. It's thinking about humanity itself, what makes us work and what doesn't."

Instead of altering our diets to chase a paleolithic ideal that may be based more on fantasy than fact, Schnorr says we could instead look at how our changing relationship to the environment alters our health.

Digging into the details — Research into the relationship between the gut microbiome and other aspects of human health has exploded in the last decade. But giving our ancient ancestors the same treatment is a little trickier, in part because fecal samples which have stood the test of time are a little scarce, to say the least.

As Schnorr and her team explain in the study, the make-up of the ancient human gut microbiome has often been inferred by extrapolating data from modern-day human samples back in time — but this technique is far from ideal.

In the new work, Schnorr and her team take a different approach. They did a DNA analysis of confirmed Neanderthal fecal sediment to identify what bacteria flourished in the guts of these ancient peoples.

What they did — To identify what bacteria called Neanderthals home thousands of years ago, the researchers zoomed in on bacteria found in 14 separate fecal samples found at El Salt in Spain.

These "paleofeces" samples, or coprolites, are the only way to truly gain insight into these ancient cut microbiota, according to the researchers.

During the process, the researchers had to take care to keep their own, modern human bacteria from contaminating the ancient samples. This is similar to how space scientists need to take care not to contaminate any Mars or Moon-bound rovers with human DNA, just in case we mistake such rogue material for non-Earth life.

What they discovered — Despite predating modern humans but 50,000 years, the research team identified many of the same microbiota you can find in the human gut today, including microbiota which would have allowed Neanderthals to extract extra energy from dietary fiber. This, the researchers write, "strengthen[s] the relevance of plant foods in human evolution."

The findings point to two distinct but equally important connections between the gut microbiome and human health, according to the researchers:

Taken together, these suggest a historic health benefit of these disappearing microbes.

While these bacteria do not reveal the exact contents of the Neanderthals' diets, Schnorr says preliminary data suggest stereotypical ideas about Neanderthals as inveterate carnivores isn't the truth.

"Our agenda is to really challenge the picture that has been proposed before that Neanderthals were only eating meat," Schnorr says.

"They were actually living in a complex environment with a complex, mixed diet."

What we still don't know — Going forward, Schnorr says it is essential to collect more ancient fecal data to get a clearer picture of what the typical ancient human's gut might have looked like. Without this contextual data, the researchers are limited to comparing the Neanderthals' microbiomes with those of modern-day humans.

For her part, Schnorr says she is especially excited to sequence the genomes of these ancient gut microbes. By doing that, she and other scientists can learn how different bacteria connect to human behavior and health, and how that has changed over time.

Editor's note: This story was updated on 2/25 to correct the name of the journal.

Abstract: A comprehensive view of our evolutionary history cannot ignore the ancestral features of our gut microbiota. To provide some glimpse into the past, we searched for human gut microbiome components in ancient DNA from 14 archeological sediments spanning four stratigraphic units of El Salt Middle Paleolithic site (Spain), including layers of unit X, which has yielded well-preserved Neanderthal occupation deposits dating around 50 kya. According to our findings, bacterial genera belonging to families known to be part of the modern human gut microbiome are abundantly represented only across unit X samples, showing that well known beneficial gut commensals, such as Blautia, Dorea, Roseburia, Ruminococcus, Faecalibacterium and Bifidobacterium already populated the intestinal microbiome of Homo since as far back as the last common ancestor between humans and Neanderthals.

More like this
Science
Jan. 26, 2023
Lab-grown chicken could hit store shelves soon — here's how it tastes
By John Wenz
Mind and Body
Jan. 23, 2023
Can spicy food boost our gut health? Here's what the science says
By Katie MacBride
Gaming
Jan. 27, 2023
What we know about every Honkai: Star Rail character so far
By Jess Reyes
LEARN SOMETHING NEW EVERY DAY.
Related Tags
Share: