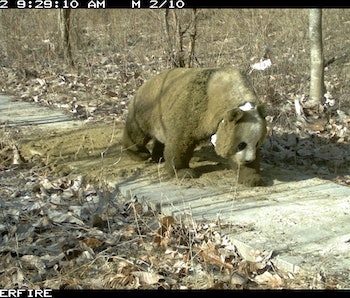 A cuddly creature famous for its tumbles is now associated with a rolling of a different kind — this time, in horse manure.

Giant pandas have a proclivity for playing with poop, according to research published Monday in the journal Proceedings of the National Academy of Sciences. The study describes "an unusual behavior" not often seen performed by wild mammals, the research team explains.

"Pandas not only frequently sniffed and wallowed in fresh horse manure, but also actively rubbed the fecal matter all over their bodies," write the study authors.

Why? It comes down to a matter of utmost importance to all animals: survival.

Fecal attraction — While the study states "attraction to feces" in wild mammalian species is rare, the animal kingdom is still acquainted with poop. The study authors note some mammals can recognize potential danger in the feces of their predator, using the smell of scat to avoid scary situations. Others actually spread the feces of other animals to mimic the aroma of predators — and throw potential animal hunters off their scent.

However, few studies have tackled the biological underpinnings of such behavior, and not on a molecular level. This study makes headway there.

The researchers were drawn to the giant pandas, Ailuropoda melanoleuca, in the Qingling Mountains of China. These pandas have been spotted engaging with horse manure in four ways:

Interestingly enough, this region is home to an old trade route connecting the Shu kingdom and Chang’an, bringing horses into close proximity with pandas for thousands of years. Therefore, researchers speculate in the study that pandas may have evolved to be familiar with the ripe scent of horse manure.

In the study, scientists tested three types of animal groups for comparison:

What the scientists discovered — Why do pandas roll around in poop? While some researchers suggest that other animals, like dogs, roll in poo for ancient evolutionary purposes linked to camouflage, pandas are much more simple in their reasoning: they want to stay warm.

Using a combination of infrared cameras, climate data, genome analysis, and direct observations, the researchers tracked the number of horse manure rolling events and correlated this behavior with cold temperature. They found an association between cold days and the likelihood of "horse manure rolling behavior."

For example, researchers observed more frequently rolling among wild pandas during the colder months from November to April. They never observed them rolling around in temperatures warmer than 68 °F.

The pandas also didn't seem to care much for old horse manure. They almost exclusively interacted with feces that were less than 10 days old, indicating something unusual about the biological makeup of fresh manure that helps pandas tolerate cold weather.

Digging into the details — To understand the influence of these compounds on rolling behavior, the researchers designed experiments for both zoo pandas and lab mice.

For the zoo pandas, the researchers placed three bundles of hay, designed to resemble a mound of dung. They laced each 'dunghill' with a different component respectively: BCP/BCPO, fatty acids, and water.

The pandas were attracted to the BCP/BCPO-laden dunghills, which effectively mimic fresh horse manure, but mostly ignored the other two dunghills.

The researchers also confirmed their hypothesis with the lab mice, which were confined in a Plexiglass chamber. Before the mice were two temperature plates: a cold one at 10 °C and a warmer one at 28 °C.

Researchers applied BCP to the paws of one group of mice while applying saline to another test group. They found that the mice receiving BCP were able to cross over more easily from the cold plate to the hot plate, and also spent more time on the cold plates.

The link between manure and temperature — Mice, much like humans, shake in the cold and huddle up to retain heat. However, the BCP-laden mice did not exhibit these behaviors — confirming the researchers' belief that BCP plays a key role in temperature regulation, and allows increased tolerance of cold weather.

Importantly, TRPM8 is associated with cold sensation in some animals. BCP/BCPO effectively suppresses TRPM8, in turn inhibiting the cold feeling these animals would otherwise experience in chilly temperatures.

Giant pandas aren't just messing with poo for the fun of it. Scientific evidence supports their scat play as a logical response to cold weather.

For now, it's unclear whether other animals also exhibit this unique horse manure rolling behavior — few animals have had such longstanding exposure to domesticated horse manure as the giant pandas in the Qingling region.

Abstract: Attraction to feces in wild mammalian species is extremely rare. Here we introduce the horse manure rolling (HMR) behavior of wild giant pandas (Ailuropoda melanoleuca). Pandas not only frequently sniffed and wallowed in fresh horse manure, but also actively rubbed the fecal matter all over their bodies. The frequency of HMR events was highly correlated with an ambient temperature lower than 15 °C. BCP/BCPO (beta-caryophyllene/caryophyllene oxide) in fresh horse manure was found to drive HMRbehavior and attenuated the cold sensitivity of mice by directly targeting and inhibiting transient receptor potential melastatin 8(TRPM8), an archetypical cold-activated ion channel of mammals.Therefore, horse manure containing BCP/BCPO likely bestows the wild giant pandas with cold tolerance at low ambient temperatures. Together, our study described an unusual behavior, identified BCP/BCPO as chemical inhibitors of TRPM8 ion channel, and provided a plausible chemistry-auxiliary mechanism, in which animals might actively seek and utilize potential chemical resources from their habitat for temperature acclimatization.

More like this
Science
6.19.2022 1:00 PM
What is my dog thinking? Science may finally have an answer
By Tara Yarlagadda
Science
6.22.2022 8:26 PM
Yes, there are mites living on your face — and they can poop, a new study finds
By Allison Parshall
Science
6.23.2022 6:00 PM
Reptile longevity is even more complex than we imagined — study
By Elana Spivack
Related Tags
Share: