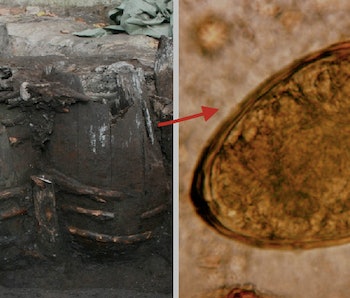 You can learn a lot from poop. These days, scientists look at people’s feces to figure out their diets and what type of drugs they’re partying with. According to a study released Wednesday, ancient poop is just as revealing. In PLOS One, researchers report they found a bunch of parasite eggs in feces piled up in ancient latrines, and that this fantastically gross endeavor has provided clues into the lifestyles of humans who lived thousands of years ago.

Ancient latrines found in Bahrain, Jordan, Denmark, the Netherlands, and Lithuania are the focus of the new paper, authored by a team of Danish and Dutch scientists. The samples of ancient waste range significantly in age, with the oldest, found in Bahrain, dating to 500 B.C. to the most recent, found in the Netherlands, dating to 1700 A.D. Microscopy techniques allowed them to pinpoint parasite eggs within the old poop, and DNA analysis of those parasites revealed not only what these humans ate but also the animals they interacted with and the parasites that plagued their stomachs.

“Using a novel approach of applying shotgun sequencing on ancient parasite eggs that have been purified by filtering, we have obtained a new and much more detailed insight into parasitic infections of human populations of the past,” the authors write.

When parasitic worms infect an animal, they lay eggs in the intestine, which are then later plopped out when that animal defecates. The scientists had at first reasoned there were several ways the eggs could have gotten into the poop: They might have been spread from human to human, passed to humans from animal hosts, or introduced through the consumption of already infected animals.

The team’s analysis showed that most of the parasite DNA came from parasites that spread from human to human. The second most common parasite came from a species that’s spread when people eat raw or undercooked fish and pork. Ancient humans, it seems, were not the cleanest.

Via shotgun sequencing, the scientists reconstructed the mitochondrial genomes of some of the parasites. Doing this revealed the species of parasites lurking in the ancient poop, which included the giant roundworm (Ascaris lumbricoides) and human whipworm (Trichuris trichiura). While humans, especially those in Europe, were commonly infected with intestinal worms until the last century, today roundworm and whipworm are fortunately only highly prevalent in countries with low levels of sanitation, insufficient water refinement, and animals that live close to humans.

Their analysis also turned up parasites known to infect sheep, horses, dogs, pigs, and rodents, indicating that the humans who used these latrines lived in close proximity to those animals, with their feces ending up in the same dump. Some poop samples really let the researchers dig into the details of the lives of their makers. For example, feces harvested from the Danish samples, dated from 1018 to 1400 A.D., hints that those ancient people dined on fin whales, roe deer, and hares. Meanwhile, plant DNA found in the feces from North European latrines dated to the same period shows the veggies of choice were cabbages and buckwheat.

Interesting as it is to know how gross our not-so-distant ancestors were about personal hygiene, it’s the mitochondrial DNA reconstructed from the parasite eggs that really has the scientists excited. This genetic material, they explain, can reveal evolutionary relationships and, with further study, reveal greater insights about the spread of ancient parasites.

More like this
Science
5.20.2022 1:00 PM
How do dolphins maintain their glowing skin? A study reveals the surprising answer
By Jennifer Walter
Science
5.20.2022 12:00 PM
Look: Hidden fossils reveal a microscopic creature that may be resilient to climate change
By Jennifer Walter
Science
5.16.2022 10:00 AM
Pig-human heart transplants still have a long way to go
By Andrew Fenton, The Conversation and Françoise Baylis
Related Tags
Share: