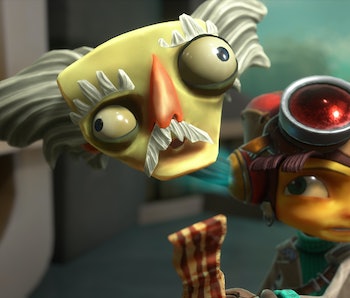 Microsoft confirmed on Monday that it will host another Xbox Series X showcase on July 23 to exhibit some first-party games and the next-gen hardware. While we speculated what games and other announcements could take place at the show last week, new reports and rumors have emerged since then.

Here are 5 games to expect during July 23's Xbox Game Showcase, and one thing we probably won't see.

One of the studios directly mentioned when this July event was first teased in May was Double Fine. The studio is known for its wackier smaller-scale games. Following a report on Venture Beat, it seems very likely that Psychonauts 2, a sequel to the cult classic mind-bending platformer, could be Double Fine's game for the event.

With Double Fine behind it, Psychonauts 2 should be hilarious and entertaining. Still, we haven't heard much about it since E3 2019. If Microsoft has been holding onto this release for the Xbox Series X launch, it would make sense to show it off here, unless Double Fine has something else in store.

At X019 in November 2019, Rare teased a brand new IP called Everwild. It appears to be Rare's main priority now outside of supporting Sea of Thieves. Set in a fantastical, vernal world full of all sorts of bizarre creatures, Everwild remains mostly a mystery in terms of what the gameplay might actually look like.

Sadly, we have not heard much more about this new game since then, so July's Xbox Series X event would make sense for the game's grand return, especially if it's a game coming out in the console's launch window.

One key game Inverse thought was missing from the PS5 showcase was Call of Duty: Black Ops Cold War because Sony and Activision have had a close partnership for the series during this console generation. This is also the latest we've ever gone in a year without hearing about the next Call of Duty game. Apparently, that could be a result of Activision holding the new game for Xbox's July event.

The aforementioned Venture Beat report states that "maybe this is where Activision finally shows off the next Call of Duty." While that language may sound a bit unsure, author Jeff Grubb teased the contents of EA Play 2020 similarly. I'm sure Call of Duty fans are itching to learn more about the rumored Black Ops Cold War, and if Microsoft and Activision are renewing their partnership going forward, it would make sense to reveal the game at this event.

Obsidian was named, just like Double Fine, back in May when the July showcase was originally teased. As such, expect to see whatever Obsidian is working on next here. As for inXile, the studio has been quiet about its post-Wasteland 3 plans, but Venture Beat claims that "InXile is also working on a bigger-budget game in the Unreal 5 Engine." Coupled with a rumored Fable game, these titles should give Microsoft a very good standing in the RPG genre during the next generation.

One thing that won't be there: Price Reveal

Yes, it's very likely that we still won't know the price of Microsoft's next-generation console after this event. If it hasn't already become obvious, both console manufactures are playing the waiting game and hoping the other reveals the price of their next-gen console first so they can adjust theirs accordingly. Unfortunately, expect this trend to continue into, and perhaps all the way through, July.

Unless Microsoft plans to reveal Project Lockhart during this event, it's unlikely that we will learn more about the console's pricing here. The main focus of this event will be on games, so don't expect pricing info. Hopefully, we'll finally learn more about how much Xbox Series X and Project Lockhart will cost once the later is revealed in August.