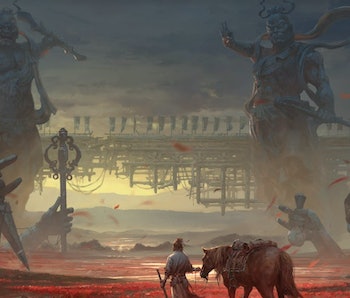 Gamescom 2022 started off with an opening night showcase that updated fans on many games we have already seen plenty of in the past year. But one of the most surprising announcements was that of Where Winds Meet, a new open-world action RPG steeped in Chinese history and mythology with a sleek martial arts combat system.

While this is the first time seeing Where Winds Meet the reveal included a lot of footage and information to drool over. Here is everything we know about Where Winds Meet.

When is the Where Winds Meet release window?

At the moment there is no official release date for Where Winds Meet. A press release for the game does say that there will be a beta test for the game (no concrete information on if this will be public or more limited) that is scheduled to happen by the end of 2022.

The state of footage shown in the trailer in addition to a beta so close on the horizon puts Where Winds Meet in a good place for a release as early as late 2023.

Is there a Where Winds Meet trailer?

Yes! Where Winds Meet revealed itself in spectacular fashion at the Gamescom 2022 Opening Night Live show with a jaw-dropping trailer.

What is the Where Winds Meet story?

Where Winds Meet is set during the beginning of the Northern Song Dynasty period of Chinese history, at the end of the 10th century C.E. The player takes on the role of a wandering swordsman during this age of war and conflict. The player must decide between upholding their own moral code or giving into a world of blade and blood.

The mix of historical setting and characters with elements of fantasy will remind many gamers of the Assassin’s Creed franchise which has seen remarkable success in its historical fiction approach to storytelling.

The biggest influence on Where Winds Meet is martial arts movies. With the ability to counter enemy blows, use Tai Chi to “reflect their attacks,” and use acrobatic moves to maneuver enemies, there is a lot of freedom in Where Winds Meet. Of course, as a swordsman, the player-character also has access to a wide range of weapons ranging from swords to bows and arrows.

Where Winds Meet promises to give players a variety of gameplay to pursue outside of just combat with enemies. Becoming a doctor who saves lives or a merchant earning as much gold as possible are both options. Where Winds Meet also has an “expansive free-construction system, with over 600 authentic components” that will allow players to build in the game world.

What platforms is Where Winds Meet coming to?

Where Winds Meet is currently a PC-only game. As it was just announced it is possible that more platforms could be announced in the future.

Who is the Where Winds Meet developer?

Where Winds Meet is the first game from Everstone Studios, supported by NetEase Games. NetEase is a Chinese game company that owns studios such as Suda 51’s Grasshopper Manufacturer and games like Naraka: Bladepoint. They also partner with Blizzard to operate Chinese versions of games like Overwatch and Diablo Immortal.

“The studio’s vision is to employ international game production techniques to express the unique concept of oriental arts” states a press release, “With characters of certain historical backgrounds and martial arts elements, the team aspire to reconstruct the distant past with cutting-edge technologies and bountiful detail, so as to build deep connections with our players and create an impressive open world that fills them with wonder.”