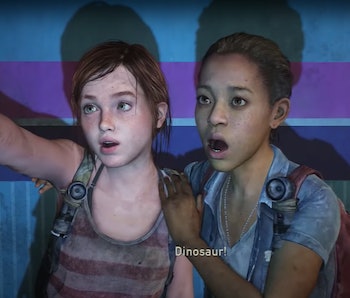 A massive batch of The Last of Us Part II spoilers revealing crucial plot and gameplay details hit the internet on Monday, transforming social media platforms like Twitter or Reddit into a spoiler minefield until the sequel is released on June 19. A recent Sony patent, however, describes how the PlayStation 5 might one day feature a built-in spoiler filter that can help prevent spoilers from ever reaching you.

On April 23, Sony was granted a patent application for a spoiler-blocking program by the U.S. Patent and Trademark Office. This potential PS5 feature will catalog all of the plot points, quests, and items players have encountered during a story-driven game so it can omit any spoilery content gamers might encounter while browsing the internet on the console.

For example, if you’re only halfway through the Final Fantasy VII Remake, the PS5 will know not to serve you a video guide of how to defeat the final boss, even though it might be one of the most-watched videos related to the game. This way, gamers can peruse user-generated content on the PS5 without having to worry about accidentally ruining the ending of a game they’re obsessed with.

The patent states that gamers will be able to deactivate this filter whenever they want if they don’t mind spoilers, but Sony seemingly hopes it’ll help gamers that are a month or two late to a game still enjoy a spoiler-free experience as much as the people who got it on its release day.

“This approach can result in an increase in the number of single-player and co-op PvE gamers who engage socially around those games, with their friends, and the broader community.”

The concept for this feature on the PS5 fits neatly into Sony’s strategy to get gamers creating more user-generated content using the next-generation console. The gaming system’s newly announced DualSense controller dropped its “Share” button in favor of a “Create” button, which suggests the PS5 will give users easy access to video and image editing tools right from their favorite titles.

The PS5 could become more of a social network for gamers that want to share tips and tricks on how to defeat a certain boss, show off their accomplishments, or simply create a meme. With these new capabilities come even more ways for spoilers to slip into gamers’ newsfeeds, but this feature won’t be able to control or eliminate social media spoilers outside of the PS5.

The Inverse Analysis — The patent doesn’t mention anything about helping gamers block spoilers on their other social channels, like Twitter, Facebook, or Reddit — but it does imply that Sony aims to make the PS5 a hub through which users can interact with the internet in more ways than its predecessor. The PS4 does have an innate web-browser, but it's much less user friendly than a computer. Sony may be investing more into the user interface for the PS5, which seems both wildly ambitious and brilliant, if it's true.

It’s possible with this new patent that if users connect social media accounts to the PS5, then this feature might alter settings on other social networks, but there’s nothing in the patent document to suggest that. Sadly, gamers will need to continue using browser extensions to filter keywords they want to avoid. But at least they won’t have to worry about spoilers randomly appearing on the PS5’s menu.

More like this
Gaming
8.4.2022 7:11 PM
10 new games to grab ASAP from the PlayStation Summer Sale 2022
By Robin Bea
Gaming
8.1.2022 5:37 PM
Backbone for PS5 is a solid mobile controller with odd flaws
By Joseph Yaden
Gaming
18 hours ago
Tower of Fantasy falls short of Genshin Impact in one key way
By Jess Reyes
Related Tags
Share: