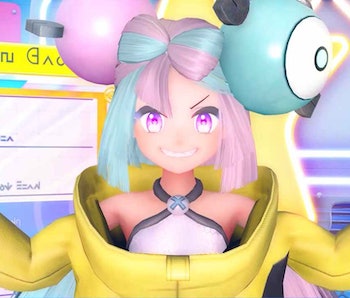 Nintendo has released numerous trailers for the upcoming Pokémon Scarlet and Violet. Each video introduces a new character with an impeccable character design. Following the reveal of the ice-type Gym Leader Grusha and the punk antagonist Mela, Nintendo has revealed Iono. While she is the Electric-type gym leader, her main passion is being a full-time streamer. Yet a new theory suggests that Iono could be hiding a secret: She’s a V-Tuber.

Paldea’s favorite streamer — As introduced by Nintendo, Iono is a popular streamer who hosts the “Iono Zone” live stream. She is super energetic and acts as a sort of announcer slash game show host, offering weather updates for the Paldean region as well as playing games like asking viewers to guess who her partner Pokémon is. Yet some aspects of her design suggest that she is more than just a streamer but actually a V-Tuber.

V-Tubers are a subcategory of streamers that use digital avatars in place of a human person to act as the influencer personality. The trend began in Japan and has gained attention globally in the past few years, with V-Tubers like Gawr Gura and Mori Calliope gaining millions of followers.

Iono’s eccentric character design that features an oversized sweater, multi-colored hair, and sharp teeth bear the hallmarks of V-Tuber character design. While there have been some colorful character designs in the Pokémon franchise, Iono certainly reads as a little out of the ordinary. Also of note is that the official U.S. video for Iono’s announcement kept the Japanese dub of the character, adding English subtitles. Pokémon has a history of attempting to remove any foreign ideas that American audiences might not understand, so keeping the Japanese dub feels like a purposeful decision that could imply Iono’s V-Tuber identity.

Who is Iono? — If Iono is indeed a V-Tuber then it begs the question, who is Iono really? One Twitter user put forward the theory that Iono’s secret identity could be one of the protagonist's classmates. Back in August, Nintendo introduced Penny, a classmate of the protagonist at Pokémon Scarlet and Violet’s Naranja or Uva Academy (depending on which version you get).

In the official description of Penny, she is described as having “a bit of a shy personality, and for some reason, she doesn’t seem to come to the academy very often.” Penny is designed as the nerdy shy girl with glasses, like Futaba from Persona 5. One specific element of her design that links her to Electric-type Pokémon are her tights which have plus and minus signs patterned all over them. Ions, which most likely give Iono her name, are atoms or molecules with a net electrical charge symbolized by plus and minus signs because they indicate the gain or loss of electrons.

Her Japanese name “Nanjamo” is a way of saying “nothing,” which suggests Iono could be a play on “I don’t know” in English. All signs point to an air of mystery.

Pay no attention to the man behind the curtain — However, if Penny is not Iono there is the possibility that this new Gym Leader could fall into a problematic trope. As pointed out by one Twitter user, Iono is a “bokukko,” a feminine-presenting person who uses the masculine Japanese pronoun “boku” (Nintendo officially uses she/her pronouns in English). In addition, the light-blue and pink multi-colored hair of Iono seems to evoke the transgender flag.

Nintendo does not have a history with good queer representation, going so far as to explicitly say that characters fans consider to be a part of the LGBTQ+ community are instead cisgendered, straight individuals.

Most recently this happened with Splatoon 3’s non-binary icon Shiver. While Iono can be read as a very girly queer character, it is equally possible that the reveal she is a V-Tuber is linked to her true identity being a man. The trope of feminine men pretending to be women is very prevalent in certain genres of Japanese manga, anime, and video games. One notable example of the trope in video games is the character Chihiro in Danganronpa: Trigger Happy Havoc.