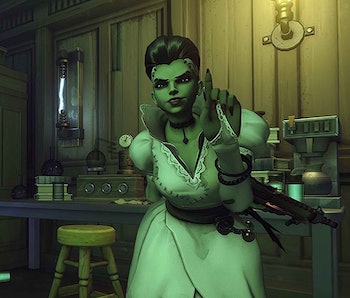 The arrival of October means that Halloween celebrations are in full swing. For Overwatch 2 players, that means the annual return of the spooktacular Halloween Terror limited-time event. Less than a month into the troubled sequel’s release, the introduction of this classic Overwatch event could be the perfect cheery celebration for developer-publisher Blizzard. Here is everything you need to know about the game modes, playable characters, and rewards that will be available during Overwatch 2’s Halloween Terror.

When is the Overwatch 2 Halloween event?

In a Blizzard blog post detailing Overwatch 2’s inaugural season, it was revealed that Overwatch’s annual Halloween event, Halloween Terror, will be returning from October 25 to November 8, 2022.

There is no official time that the October 25 patch will go live. However, most Overwatch patches are rolled out around 3 p.m. Eastern.

What are the Overwatch 2 Halloween event game modes?

Junkenstein’s revenge was a special game mode only available in the original Overwatch during the Halloween season. In contrast to the player vs player modes that the normal game offered, Junkenstein’s revenge was a 4-player horde mode that let players work cooperatively to survive waves of “Zomnics.” The mode took place on the Aldersbrunn map, a modified version of the Eichenwalde castle location.

Over the years the Halloween event has introduced different difficulty options for the horde mode as well as an endless waves mode. The limited-time event will also bring with it a list of special challenges to complete that will reward players with more experience and currency that will help unlock the event's special rewards.

Overwatch 2’s Halloween event will introduce a sequel to Junkenstein’s Revenge titled Wrath of the Bride. A lore post on the official Overwatch blog suggests that players will need to investigate “strange noises coming from the old quarters of the castle”.

In addition to this new twist on Junkenstein’s Revenge, the original version of the co-op PVE mode introduced in the first Overwatch Halloween event will also be making a return for players to enjoy. From October 28-31 Blizzard will also be running a Double XP weekend, so partaking in the seasonal events will help you make a lot of meaningful progress toward completing the Season One battle pass.

Who are the Wrath of the Bride playable characters?

The four playable characters that make up the core roster for Junkenstein’s Revenge: Wrath of the Bride are Ashe, Sojourn, Junker Queen, and Kiriko. Ashe is the only hero from the original Overwatch playable during this year’s Halloween event. In most past years, however, there’s also been a playlist where you can use any character you want.

Sojourn, Junker Queen, and Kiriko are all locked behind Overwatch 2’s battle pass, requiring players to progress through the game to unlock them. Most likely Wrath of the Bride will take away this unlock restriction and let everyone try out the new heroes during the Halloween event. While the original Junkenstein’s Revenge put Junkrat as the principal villain with several other characters like Mercy, Reaper, and Roadhog on his side, Wrath of the Bride introduces Sombra as a new antagonist.

What are the Overwatch 2 Halloween skins for Wrath of the Bride?

The four playable heroes all have new skins that will be available. Sojourn will be receiving a noir detective inspire ensemble, Junker Queen will get a skin that looks like a mix between Mad Max and an executioner, Kiriko will be joining Mercy on the list of characters with witch skins, and Ashe will be getting a sleek monster-hunter attire. Sombra’s skin fully embraces the Bride of Frankenstein inspirations, dressing her in a tattered wedding dress, sickly green skin, and a black hairdo with white streaks.

In the official trailer for the event, numerous other Halloween skins from past years look to be making a return. If you never got your hands on the Witch Mercy skin, then you have till November 8 to remedy this.

One skin making a return is the Werewolf Winston skin, which debuted in 2020. This skin can be earned by watching Overwatch 2 streamers on Twitch during the Halloween Terror event. Watching for a total of four hours will unlock the skin.

As a nice treat (no tricks involved) for players, Blizzard will be giving away the Cursed Captain Reaper legendary skin to anybody who logs in to Overwatch 2 during the Halloween Terror event through the end of Season One on December 6.

This article was originally published on Oct. 10, 2022