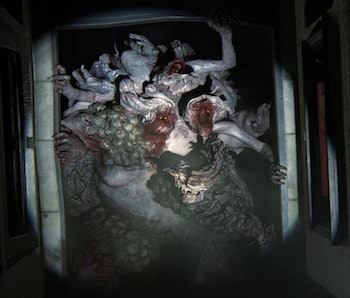 The Last of Us Part 2 features plenty of freaky moments, but the greatest abomination you face is the Rat King, a monstrous amalgamation of some of the earliest Cordyceps patients in Seattle looking to consume and destroy anything in its path. It's a stressful encounter, but following these steps should make the process of beating The Last of Us Part 2's scariest boss much easier.

This article contains spoilers for the second half of The Last of Us Part 2.

How do you encounter the Rat King? Towards the end of Day 2 as Abby, you'll have to visit the Seattle hospital in order to get supplies to amputate Yara's shattered arm. Though the WLF soldiers at the hospital quickly turn hostile towards Abby, she's freed by her friend Nora, who sends her to the lowest floors of the hospital in order to find the needed supplies. She warns Abby the area is riddled with infected, including some of the earliest patients with the Cordyceps virus.

After venturing through the lower levels, taking out some Clickers, and restoring power to the floor, Abby finds the supplies she needs in an ambulance. Unfortunately, just as she finds the monstrous Rat King attacks, clearly the oldest infect patient (or should we say patients) that players have ever fought in The Last of Us series.

Once it attacks, you'll be locked in a fight with it and will have to kill it in order to move on. Here are some tips on how to survive before the chase sequence and the boss fight itself.

Have enough supplies going in: This can be a bit tricky to manage in a stealth survival game, but you'll want to be as prepared as possible going into the Rat King fight. Craft all of the health kits and pipe bombs you can beforehand, and try to conserve ammo in all of the enemy encounters prior to the Rat King fight. Make sure all your weapons are fully loaded so you don't lose precious seconds in the heat of combat. This is one instance where being prepared truly is half the battle.

Always keep moving during the chase sequence: When the Rat King is first encountered, Abby will try running from it. It will always be right on your tail, but you should be okay if you never slow down or turn around. Jump over the obstacles in your way at the right time and follow the necessary quick time events and you should fall through the floor in the arena where you fight the Rat King in no time. If you're having trouble getting to that point, follow the yellow exit arrows on the walls.

Stay moving and unload everything you've got: Once Abby and the Rat King fall through the floor, you'll have no choice but to fight the grotesque beast. If the Rat King grabs Abby it's instant death, so you'll have to keep your distance and dodge as needed. Also, don't worry about conserving resources during this fight, this is when you'll need that ammo the most.

Pipe bombs and the flamethrower are particularly effective here. Hit him with fire then flee for cover, to scour for possible supplies, craft, and heal. Try for headshots from a distance with the Hunting Pistol, or any gun you've upgraded with a scope. Once you deal enough damage, a stalker will fall out of the Rat King, and while you'll also have to deal with it, it's a good sign that you're dealing a lot of damage.

Your strategy doesn't need to change, just be aware for the stalker trying to flank you. Be nimble, keep the pressure on, and you will eventually defeat the Rat King. After crawling through a vent to get out of the room you're stuck in, you'll get pulled out by one of the Stalkers that came off the Rat King during the fight. Kill the stalker like you would any other enemy and get out of the hospital. Congrats, you've just beaten The Last of Us Part 2's freakiest encounter.

If you're still having trouble...: If you're following this guide and are still having trouble taking the monster down, there are still a few options to make it easier. You can lower the combat difficulty down to light or very light, so you don't take as much damage and the AI for the Rat King isn't as sensitive. There are no penalties outside of restarting the encounter in The Last of Us Part 2 for doing this, so you may want to consider lowering the difficulty if you're really struggling.

Alternatively, some accessibility options may also be able to help you. Turning on navigation assistance and pressing into the left stick (L3) will show you the best way to go to stay out of the Rat King's warpath. Additionally, there's also an option to increase the length of your dodge. This is helpful if you want to be risker and stay close to the Rat King, and is extremely helpful in making the encounter more manageable. You can slow down the pace of combat via the "combat accessibility" submenu of the accessibility controls. Using slow-motion can be helpful to get your bearings and line up your shots perfectly.

Hopefully, be following any of these steps, you'll be able to get through The Last of Us Part 2's most exhilarating and terrifying boss fight.

The Last of Us Part 2 is available exclusively on PS4.

More like this
Gaming
6.17.2022 4:00 PM
The agony and ecstasy of PlayStation trophy hunting: "It's a huge drop of serotonin”
By Joseph Yaden
Gaming
5 hours ago
All Expedition answers for Fire Emblem Warriors: Three Hopes
By Hayes Madsen
Gaming
6.23.2022 5:12 PM
Everything you need to know about Final Fantasy 16
By Corey Plante, Jen Glennon and Jess Reyes
Related Tags
Share: