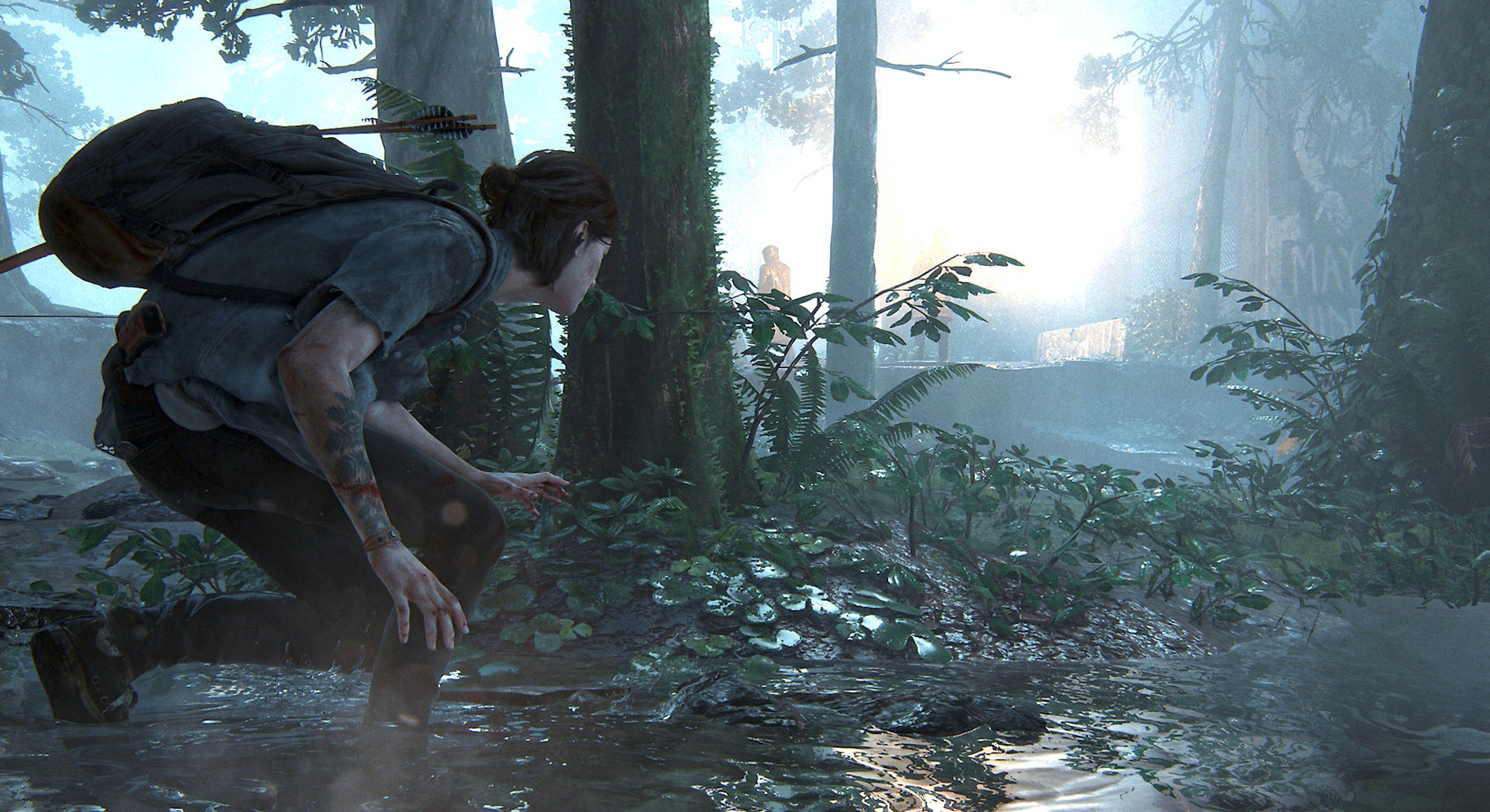 The Last of Us is not an easy game.

In Naughty Dog’s post-apocalyptic survival adventure, you’re always acutely aware that you are just a vulnerable bag of bones. You’re not Nathan Drake, able to leap mile-wide chasms with a well-placed grappling hook and a sassy quip. As Joel, you’re scrambling to make your way through grimy sewers and gutted office buildings, always desperately low on supplies, always one ambush away from having your ass handed to you.

You’re made most acutely aware of your utter lack of superhuman abilities in Chapter 9 of the original Last of Us, where you play as Ellie, who has been captured by Nolan North… er, David. Like many folks in the zombie apocalypse, David has some creepy hobbies, like kidnapping little girls and butchering people to make delicious snacks. With Joel temporarily out of commission, David captures Ellie and locks her up in the prison cells of an old winter resort.

(Reader, I do not know why a hotel would even have a jail. Perhaps to punish uncivilized guests who go apeshit at the continental breakfast, or kids who pee in the hot tub? Just go with it.)

Welcome to LAST OF US WEEK! Ahead of TLOU2's release, Inverse is reflecting on one of our favorite games of all time and the studio that made it, Naughty Dog.

Anyway, Ellie escapes David’s clutches with some well-timed stabbing, only to end up cornered by him in an abandoned family-style bar n’ grill. It was here, in this flair-free TGI Fridays, that I experienced perhaps the most infuriating gaming experience of my life — other than being pinned down by cheap low kicks from my older brother at Street Fighter II on SNES.

To successfully complete Chapter 9 of The Last of Us, Ellie must kill David in this restaurant. To do so, you must stab him three times while continually evading his attacks and avoiding making noise. Seems pretty straightforward, right? Oh heavens no, it is not.

YouTube channel Video Games Source makes this sequence look much, much easier than it was for me.

Imagine an X-Men game where you had to switch from playing as Wolverine to controlling Jubilee, and that’s pretty much what TLOU does to you in Chapter 9. Sure, it’s true to life that an adolescent girl isn’t going to be anywhere near as strong as a middle-aged man, but gosh, playing as Ellie is rough. You can barely take a hit and you’re far, far less powerful than Joel.

Also, I stink at stealth games. That’s mostly because I’m simply bad at them, and partly because I don’t have the patience to memorize enemy walking patterns and scan the environment for new cover. Why toss bottles like a chump when the Yakuza games let me whale on some goon’s face with a Vespa scooter?

I had to repeat TLOU’s restaurant sequence literally dozens of times before I finally cleared it. I’d stab David once, then knock over a plate. Game over. I’d wear him down, only to be cornered in the galley kitchen with nowhere to run. Game over. I recall even taking a calming walk before making another go. Game over, again, only somehow worse than before. This prompted in me a Targaryen-level, white-knuckle fury I’ve rarely ever experienced before or since. I’d seen tilt discussed in the context of competitive poker and esports, but it wasn’t until then that I fully experienced it for myself.

Perhaps now you will understand — if not share — my nagging trepidation about The Last of Us Part II, which sees you play as Ellie instead of Joel. Over the past few months, as games media and fans have tittered with excitement over new gameplay mechanics, like Ellie’s ability to move while prone and dogs that track your scent so you don’t stay in place too long, I’ve secretly dreaded how bad I will inevitably be at The Last of Us Part II, because it will not allow me to cheese through as brawny Mad Dad Joel. Sure, Ellie’s older, wiser, and even stabbier five years later, but if the sequel turns out to be a 25-hour version of TLOU’s Chapter 9, I can see why GameSpot’s Kallie Plagge said it gave her “stress nightmares.”

After all, seven years on, I still detest the mere thought of that damn bar sequence.

That said, I’m heartened to see Naughty Dog’s wide-ranging accessibility options for TLOU 2, which include groundbreaking tweaks to accommodate differences in motor skills, vision, and hearing. The developers have also included a five-level toggle for all things stealth, which controls enemy perception and your “grace period” for sneaking away. I have a feeling I’ll be fiddling with that one a lot.