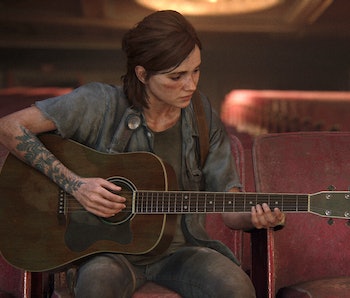 The Last of Us Part 2 is finally out, and it's just as heartwrenching as the original. The grim, yet riveting story explores the heavy toll of violence and revenge, while still managing to enthrall and surprise. If you're a little bewildered about how the story played out, or you're the kind of person who always flips to the last page of a novel, here's what happened at the end of TLOU 2 and where the series could possibly go from here.

Endgame spoilers for The Last of Us Part 2 follow.

What happens after Abby and Ellie meet? After playing the same span of three days as Ellie and later as Abby, the two characters finally face off in an abandoned theater. Abby kills Jesse and severely injures Tommy. She nearly kills Ellie and Dina, but is stopped by Lev before she can. She tells Ellie to never pursue her again. Ellie, Dina, and Tommy decide to return to Jackson after the confrontation.

Dina gives birth to a kid name JJ, likely named after the deceased Joel and Jesse. Dina and Ellie live on a farm with each other, though Ellie still has PTSD from Joel's death. Their happiness is short-lived. An embittered Tommy convinces Ellie to track down Abby once and for all in Santa Barbara. Abby's there because she heard the Fireflies may be regrouping.

Ellie gets to California and learns that Abby and Lev have been in captivity for several months. She fights her way through the Rattlers before finding Abby and Lev hanging on the beach. She brings them down and fights Abby, but can't bring herself to kill her nemesis. She chooses to forgive Abby, as she eventually came to forgive Joel for eliminating humanity's final chance for a vaccine.

Still, that last hunger for revenge comes at a heavy price. Ellie returns home to find Dina has left with J.J., presumably for Jackson, but we're not told this. Ellie tries to play the guitar for comfort, but she can't, since Abby maimed Ellie's hand during their final fight. The last shot of the game is Ellie leaving the farm, destination unknown.

What happened to Tommy? One of the most surprising moments of the farm sequence turns upsetting fast. Tommy is still alive, but he's changed dramatically from the cheerful, warm man he used to be. He's embittered, quick to anger, and still obsessed with revenge, even as Ellie's clearly trying her best to avoid thinking about Abby and Seattle. He's lost so much — his brother, his eye, and now his wife — and he's broken as a result.

His injuries make it impossible for him to pursue Abby in California, and he wants to guilt-trip Ellie into going, much to Dina's dismay. It works all too well, and Ellie leaves the next morning.

Are the Fireflies still around? For most of The Last of Us Part 2, we hear the Fireflies disbanded after the end of the first game, though there is a rumor they are reuniting in Santa Barabra. This turns out to be true according to a radio conversation Abby and Lev have before getting captured by the Rattlers, who are a brand-new faction not associated with the Fireflies, WLF, or Seraphites.

Why did Ellie let Abby live? That final conversation with Joel indicates that Ellie chooses to forgive Abby for what she did and embrace those she loves, even if she's still haunted by how brutally Joel was executed. It's a poignant moment and a smart way to keep both characters alive for future games.

It's likely that Ellie saw a bit of herself in Abby, someone driven to horrific violence to protect her found family. She may also have seen a glimpse of her old relationship with Joel in the bond between Abby and Lev. Abby, like Joel, has done unspeakably violent things to survive, yet becomes a better person by learning to care for and protect someone else.

Where does The Last of Us series go from here? With an upcoming HBO series and Neil Druckmann revealing that he's considering a The Last of Us Part 3, there is potential for the story to continue. Both Abby and Ellie live, though Ellie's story does feel complete after the end of TLOU 2. That said, she may try to make amends with characters like Dina, Tommy, and Maria. Or we could see more of her journey out to California in a DLC.

Abby and Lev's future is much more intriguing, as their adventure to find and work with the remaining Fireflies has a ton of potential. What do the Fireflies plan to do now that they are over 200 people strong? Will Abby emerge as a leader for them and find a new family now that all her friends but Lev are dead?

Writer and Director Neil Druckmann has stressed in the past that The Last of Us stories need to be about love, so if he can find some way to get those themes across with Abby and the new Fireflies in the DLC or a sequel, we're definitely here for it.

The Last of Us Part 2 is available now exclusively for PS4.