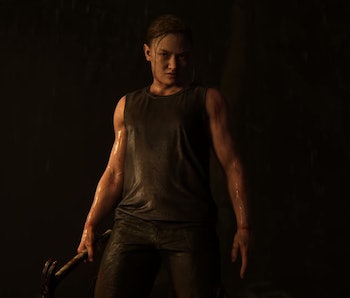 Even the most avid of The Last of Us fans may not remember Abby, a new character who has only appeared in one The Last of Us Part II trailer that's now several years old.

Very little has been said about her in any official capacity, but some new information that was leaked online this week, however, seemingly indicates that she'll have a major role in the upcoming sequel — and how she fits into the story is shocking, to say the least.

This article contains major spoilers from Monday's The Last of Us Part 2 leak.

Who is Abby? — Abby is a brand-new character that will play a pivotal role in The Last of Us Part 2. She appeared in a trailer released during Paris Games Week in 2017.

In the trailer, we see people attempt to torture and kill Abby by hanging, but she is saved by two other characters before they are all attacked by Clickers, the zombie-like mutated humans infected by the Cordyceps fungus. This was a controversial trailer at the time due to the horrific violence it depicts, including death and dismemberment for several characters. Without any proper context, it was unclear at the time why Abby was such a focus here. Almost three years later, we now know why.

Through Monday's leaks, we've learned that she'll become a playable character in the second half of The Last of Us Part 2. Looking back and analyzing the end of this trailer, it does seem like the camera swivels behind Abby at the end of the cutscene, implying that the player will assume control over here immediately after this scene ends. This is becoming increasingly common in new video games where transitions are all but seamless between gameplay and cutscenes.

Why does Abby come into conflict with Joel and Ellie? — The controversial leaks also reveal that Abby's father was one of the surgeons killed by Joel towards the very end of The Last of Us, so as The Last of Us Part 2 progresses, Abby is on a quest for revenge that leads her to kill Joel outright and fight Ellie later in the story.

The leaks suggest one of The Last of Us Part 2's themes is the cycle of violence and revenge. By forcing the player to experience things from Abby's perspective, it seems like we'll have to reckon with the fact that Joel and Ellie aren't quite the heroes we may remember them to be as the story explores all the moral grey areas between everyone.

How are fans responding to Abby? — The response from fans towards Abby since the leaks hit the internet has been mostly negative. A simple search on Twitter yields mixed results, with people criticizing the gruesome twists and character deaths that Abby is involved in. But even on the storytelling level, fans are resistant to how the focus on Abby pulls the attention away from Joel and Ellie. Quite simply, fans don't like this bold new direction, and they don't seem to like Abby either.

The Inverse Analysis — Anyone engaging with these spoilers seems a bit shellshocked that Abby plays such a major role in The Last of Us Part 2, despite the fact that she hasn't been seen since that Paris Games Week trailer over two and a half years ago. She comes into direct conflict with Joel and Ellie, two beloved characters, and makes you question their motivations and actions. These leaks make it seem like the game will force players to assume the role of the villain after she's killed the previous game's protagonist, which is a tough pill to swallow.

These leaks make her seem antagonistic, to say the least, so the idea of fighting against Joel and Ellie seems offputting. But because these plot beats are presented without the proper context within a game that probably lasts dozens of hours, we can't know for sure how effective the narrative will feel when we experience it in the game.

The best thing any of us can do is not jump to conclusions or judgments until we experience the story in its proper context.