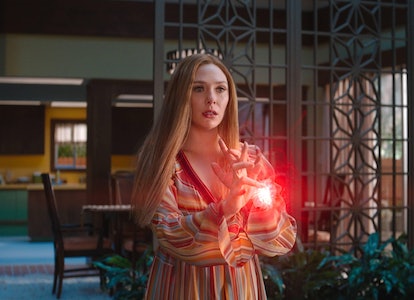 The biggest lead we currently have is an interview from all the way back in 2017, which suggested that a powerhouse actor would reprise his Marvel role in the future. Well, the future is now.

While WandaVision has pulled from all sorts of existing Marvel properties, Ant-Man and the Wasp is obviously a huge influence. Agent Jimmy Woo helms the Westview investigation, and there's even an Easter egg involving a business card. What if he's not the only character who will make a return?

Laurence Fishburne played quantum physicist and Hank Pym's rival Dr. Bill Foster in Ant-Man and the Wasp. He's a titan of genre films, with roles in the DC universe, the Matrix franchise, and the John Wick trilogy. Any actor would love to work with him — including Paul Bettany. And that's not even the biggest clue.

In 2017, on the publicity circuit for Ant-Man and the Wasp, Fishburne spoke to Collider about his upcoming projects:

“I’ve got black-ish going on, I’m developing something else for Marvel that I can’t talk about. It’s gonna be really cool. It’s gonna change the world, we hope (laughs).”

Could this "something else" be WandaVision? Bettany said the reveal was going to make people "look at the MCU in a whole new light." In Marvel terms, that's about the same as changing the world. He also mentioned his scenes with this mystery actor are "pretty intense," and Fishburne can do intense easily. Plus, he's got sitcom experience under his belt from his role on black-ish, a sitcom made by Marvel's sister company ABC. It's honestly the perfect fit.

Update: Reddit has helpfully pointed out that Fishburne was actually referring to Moon Girl and Devil Dinosaur, a Disney Channel animated series. Thanks u/TraparCyclone! Original article continues below.

So how could Bill Foster fit into Westview? Redditor u/PlatformFlimsy3168 theorizes that the "missing person" in Witness Protection that drew Jimmy Woo to Westview in the first place may have been none other than Dr. Bill Foster, Hank Pym's rival portrayed in Ant-Man and the Wasp by Laurence Fishburne.

When Dr. Foster first appears in the movie, he's giving a lecture to his students about how quantum mechanics can cause two parallel universes to coexist. "Isolated completely, a quantum system would revert back to separate states of matter. In other words, the object would be both in and out of phase with multiple parallel realities."

While this was used as exposition to explain Ghost's powers in Ant-Man and the Wasp, Wanda also has chaos-manipulating powers. This theory claims a villain coerced Dr. Foster to create the world surrounding his assigned Witness Protection neighborhood, then lured Wanda there to live in denial in a fantasy world of her creation.

So who is behind this evil plan? The answer is hiding in plain sight — Hydra, the makers of multiple products advertised in the "commercials" we've seen in the three sitcom episodes so far. Of course, they'd need an operative on the inside, which could easily be the shady Agnes, thought by many to be Agatha Harkness.

Even if Fishburne is this mystery character, so many questions remain. Will he have gone evil? In Wanda's pocket reality, could he be granted superpowers? Will we see him go giant as he teased in Ant-Man and the Wasp? There's still a lot to discover, but at least there's finally a prime suspect for WandaVision's "Luke Skywalker" moment.