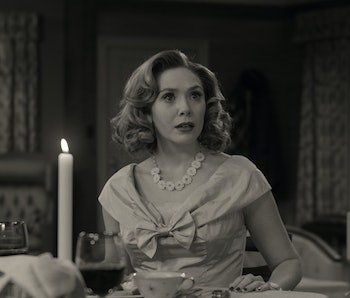 Being on Disney+ isn't stopping Marvel from adding commercials to its newest live-action series WandaVision, but is there a deeper significance behind these fake retro ads?

Answer: It's the Marvel Cinematic Universe, of course there is a deeper meaning behind them all!

In the first two episodes of the Marvel sitcom WandaVision, with Elizabeth Olsen and Paul Bettany back in their roles of Wanda and Vision, fake commercials that play at the halfway mark of each episode.

None of the products advertised are real (duh), but they are Easter eggs that tell a story about Vision and Wanda Maximoff. In the case of the first two episodes, each commercial tells the story of how Wanda Maximoff got her psychic powers.

Warning: Spoilers for WandaVision Episodes 1 and 2 ahead.

In the first episode of WandaVision, the fake commercial is for a new toaster: The Toast Mate 2000. "It's the go-to for clever housewives," says the pitchman.

What's noteworthy about the Toast Mate 2000 is that it's a product of Stark Industries, which needs no introduction. (Listen to when the toaster is used. You may hear the familiar sound of the Iron Man suit powering up.) But a Stark product that ominously ticks is how Wanda came to join Hydra: Because Stark Industries also killed her parents and destroyed her home.

In 2015's Avengers: Age of Ultron, Wanda and her brother Pietro (Aaron Taylor-Johnson) are recruited by Ultron to fight the Avengers. The two tell Ultron how they came to hate Tony Stark and seek revenge. Remember, before Tony was Iron Man, he was an affluent contractor for the U.S. military. A narcissist through and through, his name was slapped on everything — including Stark Industries' bombs. When Wanda and Pietro's home in Sokovia was attacked, they were left at the mercy of an active Stark bomb.

As Pietro and Wanda told Ultron:

Pietro: "We were 10 years old. Having dinner, the four of us. When the first shell hits, two floors below, it makes a hole in the floor. It's big. Our parents go in, and the whole building starts coming apart. I grab her, roll under the bed, and the second shell hits. But it doesn't go off. It just sits there in the rubble. Three feet from our faces. And on the side of the shell is painted one word."

Pietro: "We were trapped for two days."

Wanda: "Every effort to save us, every shift in the bricks, I think, 'This will set it off.' We wait for two days for Tony Stark to kill us."

The inclusion of a Stark Industries commercial — for something that's supposed to burn something — is actually very dark. Had it not been for Stark, Wanda might never have become who she is. Sure, she's an Avenger now. But you can bet she'd trade it all for her family again.

Marvel's Kevin Feige himself confirmed the significance of the Toast Master 2000 commercial in an interview with Collider. "A device with the Stark Industries logo and a beeping red button may mean more to people who know Wanda's past from the MCU among other things," Feige said.

In the second episode of WandaVision, a luxury Swiss watch made by "Strücker" is advertised for men.

"They say a man is never fully dressed without two important accessories," says the deep, disembodied voice of the spokesman. "His special lady, and his Strücker."

On the dial of the Strücker is the unmistakable octopus skull symbol of Hydra, the occult Nazi group led by Red Skull and then Baron von Strücker after him.

Why is that name familiar? It's because Strücker is the Hydra leader who recruited Pietro and Wanda, submitting them to experimentation that gave them powers. In the post-credits of 2014's Captain America: The Winter Soldier, Baron von Strücker (played by Thomas Kretschmann) reveals in his custody Wanda and Pietro — their first onscreen appearance in the MCU.

"It's not the world of spies anymore. Not even the world of heroes," Strücker says. "This is the age of miracles."