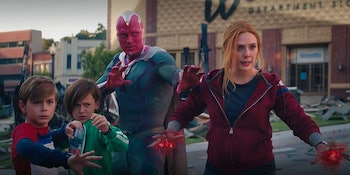 LGBTQ+ representation in the Marvel Cinematic Universe is, in a word, disappointing.

Whether it’s tokenized (like Joe Russo’s cameo in Avengers: Endgame) or stylized and not explicit (like Valkyrie’s sword-and-fireworks entrance in Thor: Ragnarok), the MCU has a ways to go. With yet another Pride month arriving with still no superhero to represent LGBTQ+ communities, there may be hope of a canonically gay Avenger on the horizon. In fact, they’ve already appeared.

WandaVision revolutionized a lot of the MCU. As the first official Marvel Cinematic Universe series, it took the sitcom format and molded it into a family drama and superhero blockbuster. The heart of the newfound Maximoff-Vision family were the twins, Billy and Tommy, who grew at an accelerated rate and held their own powers that seemed to take after mom and uncle Pietro.

These characters were inspired by Marvel Comics, and much like in WandaVision, Billy and Tommy were wiped from existence in those comics. However, that wasn’t the last we saw of them. They were miraculously born years later to different families. Thus, Billy Kaplan and Tommy Shepherd became Wiccan and Speed, members of the Young Avengers.

Though they weren’t born to Wanda Maximoff, they were very much still the children she gave herself in Marvel’s famous “House of M” storyline. Billy and Tommy joined the Young Avengers as teens, so comic readers got to see them tackle all sorts of non-super issues of growing up, including their sexuality.

Tommy and Billy in Marvel Comics

Tommy (aka, Speed) has a complex love life. While he was one vertex of a love triangle between Kate Bishop (Hawkeye) and Patriot, as of now he’s dating David Alleyne, a member of the Young Avengers and New X-Men known as Prodigy. Speed is canonically bisexual, which is rare to see in comics, especially in a way where partners of different genders are given equal emphasis.

Billy Kaplan (aka, Wiccan) doesn’t have nearly as complicated a story. When he was first inducted into the Young Avengers — before he was even known as Wiccan — he started dating Kree/Skrull hybrid Teddy Altman (Hulkling). Their love has never wavered since, even though they disagree on what superheroes are obliged to do.

When Teddy was captured by the Kree, Billy was there to rescue him (and encounter his twin brother for the first time in the process.) When Billy fell into a depression after the Young Avengers disbanded, Teddy was there to give him a firm reality check — and a proposal. Teddy and Billy got married in Empyre Vol. 1 #4, and have stayed in wedded bliss ever since.

Tommy and Billy in the MCU

While these twins have a great second shot at life in the comics, their current status in the MCU is literally nonexistent. When Wanda relinquished control over Westview, all of her reality-shifting creations were dissolved, including her own children. But with a post-credits scene showing Wanda studying the Darkhold, it’s clear Marvel is setting up their eventual return.

Just don’t expect Tommy and Billy to immediately solve the MCU’s representation problem. Marvel Studios has a history of “straightwashing” characters that are LGBTQ+ in comics. Loki, for example, is canonically both bisexual and genderfluid. While his MCU persona is chaotic and unpredictable, his romantic interests and gender identity haven’t been explained. Hopefully, that will change with the release of Loki, but nothing is guaranteed.

Beyond representation, there are also other reasons introducing Tommy and Billy’s sexuality and romances into the MCU would be beneficial. Teddy Altman’s identity as Hulkling would tie into the upcoming Secret Invasion plotline, and Prodigy has served in both the X-Men and Young Avengers, so could help finally tie those two groups together once mutants arrive in the MCU.

Why this matters — LGBTQ+ representation has been a long struggle within not only Marvel movies, but blockbusters altogether. Stories of homosexual relationships and gender non-conformity have long been confined to indie films and Oscar bait, never allowed the same wide appeal and marketing for the fear of alienating an audience who wouldn’t be accepting.

But part of the joy of Marvel movies is that their world looks like ours, with a heroic team that includes superpowered aliens and regular humans fighting side-by-side. LGBTQ+ communities are a huge part of who we are as humans on Earth, and that should be reflected in the Avengers’ fight to preserve the planet.

Considering Marvel Studios’ historic hesitation any kind of sexuality, regardless of orientation, it may be a long fight. But if there can be a romance storyline between a Hulk and a former KGB agent, there can be one between two Young Avengers who happen to be men. And it may come sooner than you think.