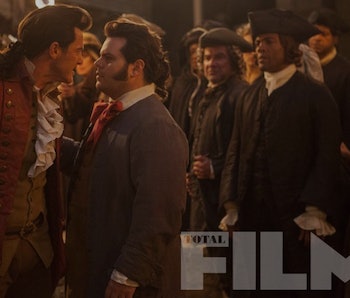 The new Beauty and the Beast live-action movie with Emma Watson and an actor covered in bison-like CGI so deep into the uncanny valley that there’s no curse of ever returning home was released in theaters on Friday. It’s garnered decent reviews and is gonna make a boatload of money, but every movie needs a controversy. For this one, the furor surrounding the reveal that Josh Gad’s character is gay fits the bill.

So, what to make of this? Allow us to explain the nuts and bolts of the situation so you can return to realizing that Meals on Wheels is being defunded.

For those familiar with the original 1991 animated film, the character in question is Lefou, the villainous Gaston’s sidekick, who functioned in the original film as comic relief and evidence of Gaston’s massive following in the poor provincial town that beauty Belle lives in. Played by Josh Gad in the new movie, director Bill Condon says that his LeFou is infatuated with Gaston and is given a “nice, exclusively gay moment,” describing a “gay moment” the same way one might describe a set of curtains on the Home Shopping Network. For those interested in said moment, spoilers are available, but know that if you blink you’ll miss it. The moment in question is hardly something that is examined in the context of the character aside from a few lingering glances.

It’s hard not to believe that Condon, who has directed other major films like Chicago, Dreamgirls, and two of the Twilight films, doesn’t know exactly what he’s doing by drawing attention to these short sequences in the film. While they definitely imply that LeFou has feelings for Luke Evans’s Gaston, it’s really a small blip, not a game changer for the way gay characters are portrayed in film. But in the weeks leading up to the film’s release, he leaned all the way in.

“LeFou is somebody who on one day wants to be Gaston and on another day wants to kiss Gaston,” he stated in an interview with Attitude magazine. “It’s somebody who’s just realizing that he has these feelings. And Josh makes something really subtle and delicious out of it. And that’s what has its payoff at the end, which I don’t want to give away.”

And, of course, that comment became the center of conversation about the film, and as expected, stirred up controversy in all the likely places. So far, the film has been banned at an Alabama drive-in theater, Disney has refused to cut the scenes in question for Malaysian audiences, and Russia is considering a ban on the film across the country. This has generated a ton of free press for the film in the past week while losing what is likely a small portion of ticket sales for a film that is projected to be one of the biggest grossing hits of the year. While it’s a major societal issue that the gay community isn’t accepted in these areas, one can’t help but suspect that the Disney super-engine is taking advantage of what they knew would stir the pot to get press and move product. The cast has joined in the media blitz, particularly openly gay actor and the film’s Cogsworth Ian McKellen.

“For people to complain about it and say they don’t want children to see it is absolute rubbish,” McKellen said to CNN at the film’s premiere. “I know people who don’t like gay people and make a fuss. It’s a very small moment in the movie. No one should get too excited.”

That isn’t to say that the acknowledgement that one of their characters is gay isn’t the progress that Disney has been reluctant to make in previous years. While the argument can be made that the company has played into the gay villain or “depraved homosexual” trope with reckless abandon in the past (see: Jafar, Scar, Ursula, Ratcliffe, Hades, et al.), all these characters were “coded gay” rather than shown explicitly. LeFou, while directly associated with the story’s villain, is a sympathetic character whose intentions are more rooted in loyalty and insecurity than in a pursuit of evil, and LGBT rights group GLAAD has come out in support of the character’s portrayal.

“Film is one of America’s biggest exports, which is why LGBTQ representation in all-ages programming is incredibly important,” the organization stated. “These portrayals both help real LGBTQ youth to recognize they are not alone and know their identity is valid when they see someone they can recognize themselves in onscreen, especially in countries where being LGBTQ is criminalized.”

That’s an important point, because foreign countries with more governmental control of movie exhibition often ban films from theaters. It’s making headlines in this case because it’s a major release from Disney based on a beloved property. But this happens all the time, and people around the world have to deal with draconian censorship that deny their humanity. Here are some major films that have been banned in the past:

China: Back to the Future, The Da Vinci Code, The Departed, Ben-Hur, Lara Croft Tomb Raider: The Cradle of Life, Deadpool

More like this
Entertainment
Jan. 19, 2023
Tron 3 is confirmed, will unfortunately star Jared Leto
By Dais Johnston
Entertainment
3 hours ago
In Infinity Pool, Brandon Cronenberg Puts Alexander Skarsgärd Through Hell
By Isaac Feldberg
Entertainment
Jan. 28, 2023
Where and how to watch the 2023 Oscar nominees
By Mónica Marie Zorrilla
LEARN SOMETHING NEW EVERY DAY.
Related Tags
Share: