"All of history is my weapon." 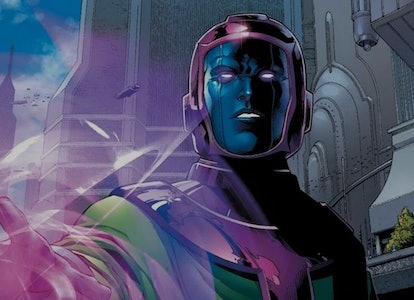 Kang the Conqueror is coming to the Marvel Cinematic Universe. Marvel fans have known this ever since Jonathan Majors was reportedly cast as the character last year. The powerful comics villain is said to make his MCU debut in Ant-Man and the Wasp: Quantumania, and one wonders how he might factor into Fantastic Four, given his familiarity with Marvel's first family.

But will we see Kang sooner — as soon as WandaVision, perhaps? At the least, the Disney+ series is already setting up the character. Here's how.

The Theory — The WandaVision Episode 7 commercial advertised a fake anti-depressant called “Nexus,” capable of keeping its user anchored back to reality, or the reality of their choice.

Unlike most of the previous WandaVision commercials, the product didn’t tie back into any major events from Wanda’s life, which led many to reasonably assume it was setting up things to come in WandaVision and the MCU as a whole.

The commercial likely is a reference to the Nexus of All Realities, a gateway in the Marvel comics that — as its title suggests — gives access to all possible realities. It could also be a reference to "Nexus Beings," a group of individuals in the Marvel comics with inextricable ties to the Multiverse as well. And who is one of these Nexus Beings? None other than Kang the Conqueror.

In the Marvel comics, Nexus Beings are a group of rare individuals powerful enough to change reality and mess with the “Universal Time Stream.” The Nexus Beings are considered key to keeping the Multiverse stable and are therefore watched closely by outside forces, including the Time Variance Authority — a group set to make its MCU debut in the Loki Disney+ series.

Kang is one of the Nexus Beings, and so is Wanda Maximoff.

If the WandaVision commercial really is referring to the Nexus Beings from the comics, then it could have huge ramifications for the MCU going forward.

The introduction of Nexus Beings — individuals who the entire Multiverse essentially revolves around — could fundamentally upset the known power structure of the MCU and change the way we look at it forever. It could also set up a moment when characters from multiple different realities converge at some time in the future, which means Marvel's untitled third Spider-Man may not be the only Phase 4 film to feature characters from alternate realities interacting with each other.

The Inverse Analysis — There’s no telling right now if WandaVision’s Nexus reference really is setting up Kang as a Nexus Being in the MCU, but the commercial’s comic book connections certainly don’t feel accidental. Knowing that Ant-Man and the Wasp: Quantumania will feature Jonathan Majors’ Kang only further adds weight to the theory — even if we still don’t know how the character will officially debut in the MCU.

Based on the commercial in WandaVision Episode 7, there is a real chance that Kang shows up as a result of the Multiverse tinkering expected to take place in Doctor Strange 2 (and possibly WandaVision). Although, that all depends on just how instrumental of a role Elizabeth Olsen’s Wanda will play in Marvel’s Phase 4 plans.

As of right now, it definitely feels like she’s going to be a central player for at least the foreseeable future — and as a result, Kang may soon take center stage as well.

More like this
Culture
Sep. 17, 2022
'She-Hulk' is wasting its hero's greatest superpower
By Dais Johnston
Culture
Sep. 24, 2022
She-Hulk shows how Marvel can fix its biggest tone problem
By Eric Francisco
Entertainment
9 hours ago
Will Agatha: Coven of Chaos feature one of Marvel’s oldest (and scariest) villains?
By Richard Newby
Related Tags
Share: