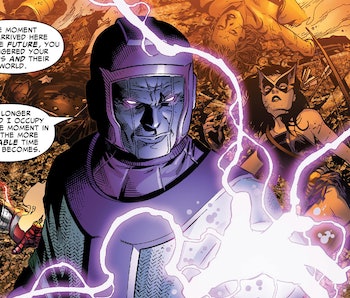 A new bit of casting for Ant-Man 3 may have some serious implications for Avengers 5. Although "Phase Five" of the Marvel Cinematic Universe is shrouded in mystery — and harder to predict than ever, what with the Covid-19 pandemic pushing release dates far into the future — it seems the cosmic realm of the MCU will play a significant role whenever the Avengers assemble once again.

Deadline cited sources that said Majors will play the alien villain Kang the Conquerer, a major Marvel villain who has squared off with the Avengers on multiple occasions.

Given that Kang the Conquerer is just a bit too big (no pun intended) of a villain to contain in a single Ant-Man and Wasp movie, it is possible Kang may wind up a more prominent antagonist for the Avengers in the far future of the MCU. Did someone say Avengers 5?

Who is Kang the Conquerer? — In the comics, Kang is Nathaniel Richards, a genius scholar from the 31st century often hinted (but never confirmed) to be a descendant of Reed Richards (aka, Mr. Fantastic of the Fantastic Four). Kang first appeared in The Avengers #8, published in 1964.

Hopping through time, Kang first tries (and fails) to conquer Earth, but he's thwarted by the Avengers. When he's sent back to the future, he overshoots by a thousand years to discover a vulnerable Earth that is too easy for Kang to take over. But while the future belongs to Kang, it is a dying future, so he travels back in time to rule the 20th (and later 21st) century again and again to conquer an Earth that is fruitful and prosperous.

The Inverse Analysis — Kang the Conquerer isn't strictly an Ant-Man nemesis, which makes his inclusion in the third, untitled Ant-Man movie a left-field decision. Kang is most often a villain to the whole Avengers, and would be someone you expect to fight Earth's Mightiest Heroes in an actual Avengers movie. However, the MCU has historically demonstrated to be unpredictable with the interpretation of characters (see the Mandarin in 2013's Iron Man 3), which means it's not impossible Kang could receive a different story than fans are used to in Ant-Man 3.

Also, like Loki who was a supporting character in 2011's Thor and the main villain of The Avengers in 2012, it is possible Kang's role in the MCU could be recurring. He could first appear in Ant-Man 3 and then reappear as a bigger threat in Avengers 5.

Furthermore, it is important to note that Avengers: Endgame fully introduced time travel as a possibility in the MCU. Kang's whole deal is time travel, and the Avengers may have done all the hard work for him to let him do his thing.

Right now, it's really difficult to predict the future of the Marvel Cinematic Universe. The coronavirus pandemic has forced Marvel to delay the start of "Phase Four"; Black Widow, previously set to open in theaters May 1 as the kick-off, is now opening in November, and even then there are whispers it will be delayed further into 2021. Kevin Feige himself could confirm Jonathan Majors as Kang in Ant-Man 3 right now, and even then that is subject to Majors' availability as production timelines change and the reopening theaters on a widespread scale become even harder to accomplish.

There is no release date for Ant-Man 3.