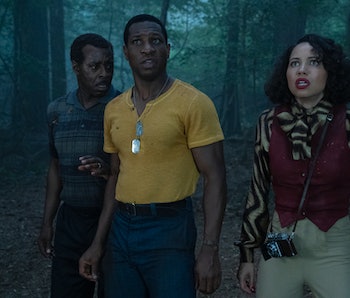 First things first. H.P. Lovecraft, the 20th century horror author whose gooey monsters have names like "Azathoth," "Yog-Sothoth," and "C'thulhu," was a vile racist. An introvert who hated both the outdoors and seafood, Lovecraft imbued all his writings with a pungent hatred for Black people and immigrants. (You don't want to know what he named his cat.)

Which is why it's a little uncomfortable to describe the show as "fun" — but hear me out. Because modern Lovecraftian horror, like AMC's The Terror, Annihilation, or Bloodborne on PlayStation 4, so often dresses up its inspired tales with Lovecraft's bone-chilling dread and helplessness, it is arresting to watch Lovecraft Country arrive with clenched fists. In the five episodes provided to Inverse for review, the show explores overly familiar pulp horror in a way that has all the chills of a big-box costume shop. Still, a commanding set of characters elevates Lovecraft Country above even its most glaring shortcomings.

From showrunner Misha Green (formerly co-creator of the woefully ignored Underground) and executive producers Jordan Peele and J.J. Abrams, Lovecraft Country adapts Ruff's 2016 novel of the same name. Atticus (Jonathan Majors) is a Black sci-fi fan fresh from the Korean War. With his father (Michael K. Williams) missing, Atticus embarks on a road trip with his uncle George (Courtney B. Vance), and childhood friend Leti (Jurnee Smollett) to find him.

All the while, it's Jim Crow America. Among other indignities, Black people are not free to travel through America's "sundown towns" — areas where Black folk were forbidden to stay past dark. Not that they were any more welcome in "regular" towns, either.

Lovecraft Country is very much a story about navigation. Though the central road trip ends shockingly early, giving way to an episodic show that toys with horror tropes with a relevant tinge (Episode 5 includes a body horror plot that allows a Black woman to disguise herself as white), the show never lets go of the thematic wheel. From the onset, Lovecraft Country is a road trip story, reminiscent of American Gods. But in the blink of an eye, the series morphs into a surprisingly X-Files-like serial format that explicitly wrestles with Blackness in horror in a way that calls to mind Jordan Peele's 2017 hit Get Out.

What Lovecraft Country lacks in narrative momentum — or any decent scares — it makes up for in the strength of its characters. Majors' Atticus, enviously chiseled out of marble, is a bespectacled blerd who, like many Black veterans, chose service for a country that refuses to recognize his humanity. Driven to find his father and unravel his secrets, Atticus is reminiscent of many of the intrepid protagonists who populate Lovecraft stories. But Atticus goes deeper, his rumination on alienation and dehumanization opening the door to a kind of interiority that is nowhere to be found among the all-white stock characters in the old paperbacks.

Jurnee Smollet shines as Leti, another blerd with magnetic presence and jagged edges. Though Leti may encourage wolf whistles (genuine props to wardrobe; they know how to style these characters), she's not so girl-next-door. In one episode, in which Leti buys a house for Black tenants in a white neighborhood, her egregious mistakes are laid bare in a rich and difficult argument with her sister, Ruby (Wunmi Mosaku), a dimensional soul with ambition in a time and place she isn't allowed, either.

Michael K. Williams is razor sharp as Atticus' distant father, and though it's hard to shake off shades of Williams' past HBO characters like Omar (The Wire) and Chalky White (Boardwalk Empire), his performance is all the more reason to give Lovecraft Country a chance.

It's the characters that earn Lovecraft Country a strong recommendation, though the show will likely disappoint cosmic horror enthusiasts. These characters are sometimes simply too in control to properly illustrate the author's characteristic bleakness, so those looking for a "true" Lovecraft experience won't get it here. Neither will those itching for pulp B horror; the tentacled and many-eyed monsters illustrative of the genre are simply too few and far between that Lovecraft Country maybe oversells its premise. Racists employed in department stores and police stations, however, those monsters are aplenty.

Lovecraft Country is a show H.P. Lovecraft would hate, and that's a marvelous thing. In its story that is unabashedly about Blackness and the horrors that lurk for Black folk just for existing, Lovecraft's inventions are mercilessly turned against him. Though it is absent of the atmospheric dread and repulsive monsters Lovecraft fans often seek, Lovecraft Country is still a worthwhile adventure through a time and place that, scary enough, still exists.

More like this
Entertainment
16 hours ago
Kate Siegel says Netflix’s Fall of the House of Usher is “like nothing anyone has ever seen”
By Dais Johnston
Entertainment
5.18.2022 7:00 AM
Stranger Things cast unpack a "quite metaphorical" Season 4
By Eric Francisco
Entertainment
5.13.2022 10:30 AM
Moon Knight almost assembled Marvel's next huge team-up, writer reveals
By Mónica Marie Zorrilla
Related Tags
Share: