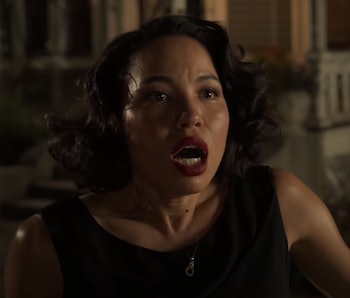 This article about Lovecraft Country was originally published on June 4, 2020 and updated on October 17, 2021 following the release of the season on HBO. Read on for the original article, with some new changes to reflect the latest updates on this topic.

The weird fiction of H.P. Lovecraft finally does what the famed author never dared to do: Tell stories about Black people. In August 2020, HBO premiered the television series Lovecraft Country, a road trip horror fantasy set in Jim Crow era America. It tells the story of an Army veteran and science fiction geek embarking on a cross-country trip to find his missing father, only to encounter otherworldly — and some very familiar — horrors along the way.

Here's a handy guide to understanding Lovecraft Country, from release date and plot summaries to the controversy surrounding its cancellation.

What is Lovecraft Country?

Lovecraft Country is an HBO series produced by horror filmmaker Jordan Peele, Misha Greene (Underground), and J.J. Abrams. It is an adaptation of the 2016 novel by Matt Ruff.

The show takes place in segregated 1950s America, during Jim Crow. It tells the story of Atticus, a Black Korean War veteran and science fiction geek who must find his estranged father somewhere in Massachusetts.

Beginning his journey in Chicago, Atticus rides with Letitia, a childhood friend and a sci-fi buff, and his Uncle George, the author of an annual published guide to help Black people travel safely. (In the book, Uncle George's Safe Negro Travel Guide is similar to the real-life The Negro Motorist Green Book, which helped middle-class Black people travel through white-only "sundown towns" and stop at roadside businesses that weren't hostile to Black travelers.)

When was the Lovecraft Country release date?

Lovecraft Country premiered on August 16, 2020. It aired weekly until its conclusion on October 18.

Who's in the cast of HBO's Lovecraft Country?

The cast breakdown for Lovecraft Country is as follows:

Where can I watch the trailer for Lovecraft Country?

HBO's already released two teaser trailers for Lovecraft Country. The first was on May 1, and a second was released on June 4.

The May 1 trailer, which sums up the general plot, features signature Jordan Peele direction in turning an upbeat, happy song — "Land of 1000 Dances" by Wilson Pickett — into something dark and sinister.

What is the significance and themes of Lovecraft Country?

The most distinct thing about Lovecraft Country is how it reckons with decades of weird fiction, a very popular genre of horror made famous by H.P. Lovecraft.

Lovecraft, who lived and died in the early 20th century, is recognized posthumously for his accomplishments in American fiction and a known influence over creators like Ridley Scott, Stephen King, Guillermo del Toro, and even shows like Rick and Morty. But Lovecraft was also a notorious racist and white supremacist.

In Lovecraft's stories like The Call of Cthulhu, At the Mountains of Madness, and The Shadow Over Innsmouth, ancient alien creatures and disturbing architecture are basically stand-ins for indigenous brown, Black, and other foreign cultures. (I personally speculate his fascination with tentacle monsters like Cthulhu stems from his distaste for seafood.) Lovecraft has poems with titles using the N-word. He wrote a glowing review of the 1915 film The Birth of a Nation, where he wrote that "the Negro is fundamentally the biological inferior of all White and even Mongolian races." You do not want to know what he named his poor cat.

While many Black writers and writers of color have left their own mark on Lovecraft-esque fiction, Lovecraft Country is a unique collision that directly equates the ancient monsters of the cosmos with the ancient monsters of American racism. In Lovecraft Country, racial profiling and police brutality are as much a danger as portals to alternate dimensions or beasts with big teeth. The white hoods of the Ku Klux Klan are as pointed as the hoods of an eldritch cult.

While the author Matt Buff is white, he grasped that complexity in a 2016 interview with The Seattle Review of Books:

"I love that feeling of figuring people out and making sense of other people’s behavior," Ruff said. "It just helps me understand the world better. Yes, the track record for white folks writing about people of color is not stellar, but I think a lot of the explanation for that is not you can’t do it."

He added, "It's good to be a little nervous. It keeps you awake."

The Lovecraft Country team was optimistic for Season 2, developing the second season (titled Lovecraft Country: Supremacy) while the first was being released. But HBO announced in July 2021 that the series had been canceled. The surprise cancellation produced an outcry from the fans, especially when the series would pick up six Emmy nominations, including Outstanding Drama Series. Developer Misha Green has since started to release elements of the series bible intended for Season 2, which sees the United States divided into several new territories.

Lovecraft Country is now available to stream on HBO.

This article was originally published on June 4, 2020