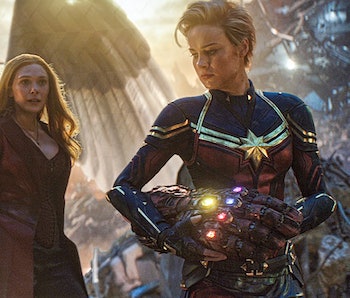 Avengers: Endgame introduced time travel to the MCU, as Earth's Mightiest Heroes traveled to the past to collect the Infinity Stones and bring back the billions lost as a result of Thanos’ deadly snap. However, the Avengers may have inadvertently unleashed an even scarier big bad than Thanos. With potentially alternate realities and timelines now on the table, Avengers 5 could introduce a comics favorite as its next major villain.

Kang the Conqueror is basically a time-displaced warlord who first appeared in The Avengers #8, way back in 1964. There have been several iterations of Kang since, which makes sense given that he's constantly time-traveling and disrupting the time stream.

Before he was Kang, he was Nathaniel Richards, a future descendant of the Fantastic Four’s Reed Richards (though Nathaniel claims the villain Victor von Doom was his ancestor).

Born in the 31st century, Nathaniel is a scholar obsessed with time travel. Stealing Doctor Doom’s technology, Nathaniel’s first adventure sends him to Ancient Egypt. From then on, he hops around to a variety of eras and has assumed a number of aliases across time, including Young Avengers member Iron Lad and Immortus.

Kang is incredibly powerful, armed with advanced technology, and can withstand radiation. His distinctive battle armor further enhances his strength and power. He’s egotistical, violent, and has conquered the Earth throughout multiple centuries and timelines, even expanding his efforts to other planets, with his primary goal being to control all of history.

The most notable Kang arc Avengers 5 could tackle is Kang Dynasty, a 16-issue storyline which ran from 2001-2001and chronicled Kang's conquest of Earth in the 21st century. Kang faces off against the Avengers and a number of other heroes after he destroys the United Nations headquarters and Washington, DC.

Kang is joined by his son Marcus and the Deviants — a humanoid race of creatures that will appear in The Eternals — in his plans to take over the planet. This is one of Kang’s most popular arcs and could be set up throughout Phase Four before culminating in a big battle during Avengers 5.

The Avengers could cross paths with Kang at several points throughout the next few movies. Perhaps Kang will pop in to recruit the Deviants in The Eternals’ post-credits scene. We also know that Marvel’s Disney+ shows will feature time travel and potentially alternate realities, so we could see the character in Loki, WandaVision, or Doctor Strange in the Multiverse of Madness.

Bringing Kang to the MCU might work best as more of a slow burn, introducing Nathaniel before setting him up to be the big bad in Avengers 5. Kang's arrival could also mark the introduction of the Fantastic Four and Doctor Doom in the MCU. After all, they're both intrinsically connected to the supervillain and it would be a great way to loop them into the action. Either way, the MCU has plenty of time to lay the foundation for Kang's appearance. With a time-traveling villain, anything is possible.