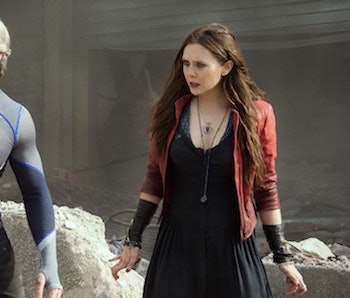 Marvel has several Disney+ shows in the pipeline, but WandaVision looks to have the most significant connection to Phase Four of the MCU. While official plot details are scarce, fans have speculated the House of M storyline could play out on the series and segue into Doctor Strange in the Multiverse of Madness. However, if WandaVision pulls off the House of M storyline, its mind-bending consequences could be at the center of Avengers 5.

The House of M, explained — Written by Brian Michael Bendis, with art by Olivier Coipel, the House of M arc was an eight-issue limited comic book series that reimagined the Marvel universe in an entirely new reality. Devastated over the loss of her twin children, Scarlet Witch uses her reality-altering magic to create a new world to bring them back.

Spider-Man, the X-Men, the Avengers, and others wake up to this new reality — which seems to have changed the course of history — to find that Captain America is now an older veteran, mutants are superior to the rest of mankind, and Wolverine is the head of S.H.I.E.L.D.

Wolverine ultimately discovers that the real culprit is Quicksilver, who worked with his sister Wanda to give everyone their hearts’ desires. This included Magneto’s own ambitions to rule the world. Wolverine, who is the only one who remembers the previous reality, tracks down all of the superheroes and they band together to reverse this alternate reality and restore the timeline.

What this means for Avengers 5 — Avengers 5 is a long way away, but it’s not too early to start thinking about what the superheroes might be up against. We know that Marvel is looking to introduce the idea of alternate timelines and the multiverse into its canon. That began with the time heist in Avengers: Endgame and will carry into its Phase Four shows and movies, including Loki and Doctor Strange 2. The House of M storyline provides the perfect opportunity to explore this concept even further. An alternate reality is also the best way to introduce Wolverine and the X-Men into the MCU.

Wanda’s alternate reality was so powerful that it briefly replaced the entirety of Earth-616, aka the main Marvel timeline. So, while the House of M storyline began with Wanda and her family, it affected the Marvel universe at large. We know Quicksilver is rumored to be joining WandaVision in a key role. Might the Disney+ series be setting up this very storyline?

What’s more, introducing the arc in WandaVision would set the stage for the preceding events to take place and culminate in a massive finale in Avengers 5. The House of M arc is so massive that it can’t possibly be tackled in a limited series like WandaVision. It could and should lead to something more.

There’s no telling what the MCU will look like after Endgame. The fabric of reality might already be unraveling, so it would make sense that the next Avengers team-up might work to restore some sense of balance to the universe and its timeline. Twisting the MCU’s entire reality may be a challenge, but it’s one Marvel Studios should take.