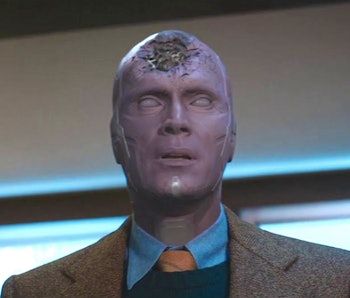 How is Vision even here? Paul Bettany’s synthezoid Avenger is one of the lead characters of WandaVision, despite the fact that he was killed in Avengers: Infinity War and was still dead at the end of Avengers: Endgame. WandaVision hasn’t given many hints regarding the nature of the character’s apparent resurrection either. In fact, for most of the Disney+ show’s first four installments, there didn’t seem to be anything really wrong with Vision. At all.

That was, until the final minutes of WandaVision Episode 4, when Wanda saw a dead version of Vision with a hole in his head standing in front of her. The moment was genuinely one of the most horrifying in the entire history of the MCU, but it has left viewers scratching their heads ever since. Everyone wants to know the same thing:

Is Vision dead or alive?

There are plenty of possible explanations for how Vision is (seemingly) alive in WandaVision, and what that terrifying scene in episode 4 really meant. One theory, in particular, posits that Vision’s resurrection was made possible not by Wanda, but a villain from the Marvel comics that has been heavily rumored to be appearing in WandaVision...

Is it possible that Vision was brought back through a deal between Wanda and Mephisto?

An Unnatural Deal — Rumors of Mephisto playing a role in WandaVision’s story have been running rampant for months now, but they’ve only been growing in popularity in recent weeks thanks to some keen-eyed viewers spotting references to the character in the early WandaVision installments. While the most recent WandaVision episode ended with one character saying that it's Wanda behind everything, with five episodes left to go before the series concludes, there’s still plenty of time for WandaVision to introduce another major player.

In the comics, Mephisto is the closest thing to the Devil that exists in the Marvel universe, and one of the key reasons for that is his penchant for making deals with Marvel heroes — deals that always end up taking more from the heroes than they initially think. Over the years, Mephisto has made deals with heroes like Spider-Man and Doctor Strange, and it’s entirely possible that he could have made one with Wanda following the events of Avengers: Endgame. What the deal might have entailed (her powers for Vision’s life, her memories for Vision’s life, her children in exchange for Vision’s life, etc.) is impossible to know right now.

As for Vision’s brief zombie-like appearance in WandaVision episode 4, there are a few possible explanations. The first is that Mephisto did bring Vision back to life, but did not fix Vision’s wounds/make him look alive. Therefore, Wanda could be using her own powers to give him a normal appearance — masking the actual grave reality of his resurrection. The flash of his dead form could have been Wanda briefly forgetting to keep the illusion going following her confrontation with Teyonah Parris’ Monica Rambeau.

It’s also possible the flash of Vision's dead form is a warning or threat from Mephisto (or whoever the show’s big bad is) to keep Wanda in line. Think of it as a not-so-subtle way of saying, “Keep these illusions going, or you'll lose him again.” Either way, there are truly sinister forces working to manipulate and control Wanda in WandaVision. Like the characters themselves, we may not really know the full extent of what’s going on until it’s already too late.

The Inverse Analysis — Marvel has closely guarded WandaVision's biggest secrets so far, making it tough to know if all the seemingly purposeful Mephisto Easter eggs are really setting up the villain’s introduction, or if they’re just red herrings meant to distract fans. (It is, after all, still possible that Kathryn Hahn’s Agnes is the show’s real villain.) For now, we’re willing to bet that Mephisto — or a villain like him — did play an integral role in bringing Vision “back to life” in WandaVision. Assuming that’s the case, seeing flashes of his dead form could be just part of the price Wanda will have to pay for his return.