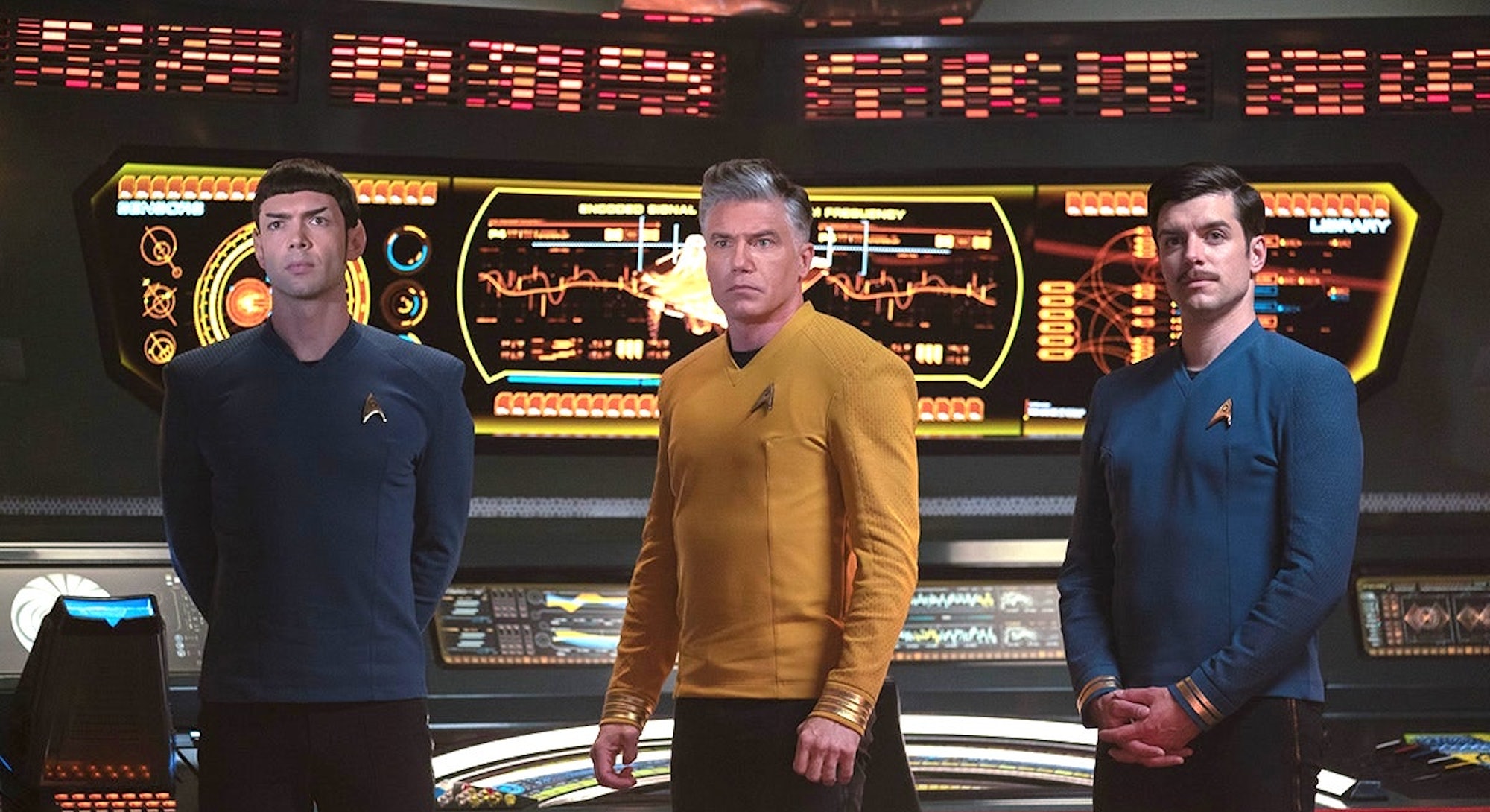 Captain Kirk has crashed the party.

In the Season 1 finale of Star Trek: Strange New Worlds, Paul Wesley’s Captain Kirk shows up much earlier than we were expecting. But, uniquely, that version of Kirk isn’t quite the same Kirk we’ll see in Season 2. According to showrunners Akiva Goldsman and Henry Alonso Myers, James T. Kirk in Season 2 will be very different than the man we saw in the finale.

Inverse spoke to both Goldsman and Myers ahead of the airing of the Season 1 finale “A Quality of Mercy.” Here’s what they said about remaking a very classic Star Trek episode, how more legacy characters from The Orignal Series are totally returning next year, and why the series will not be jumping ahead to 2266 anytime soon. Spoilers ahead.

“Balance of Terror,” gets the What If? treatment

The season finale of Strange New Worlds finds Pike meeting an alternate future version of himself who has traveled back in time to prevent Pike from avoiding his tragic fate. This leads to most of the episode playing out as an alternate version of The Original Series episode “Balance of Terror,” in which the Enterprise battles the Romulans for the first time. But, in this scenario, Pike avoided his tragic accident, and also, never stepped down as captain of the Enterprise, meaning, in this version, Kirk is the captain of a different ship, the USS Farragut.

The TLDR here is simple: Kirk needed to be captain of the Enterprise at this moment and not Pike, because Kirk would have kicked Romulan ass faster, thus avoiding a larger war with the Romulans later. But, in terms of what we see onscreen, Strange New Worlds gives fans a rebooted version of “Balance of Terror,” which, in many ways, kicks more ass than the original episode.

“Part of the conceit was always that our season one finale was the retelling of a classic episode of Trek, but with our characters, our effects and all of that,” Myers tells Inverse. “I had the transcript of ‘Balance of Terror,’ while writing this and just pulled stuff from it. It was weird. There were moments when I'd have to rewrite it. But there were some things that were just perfect the way they were.”

Written by Paul Schneider, “Balance of Terror” aired 14th overall in The Original Series, in 1967, roughly in the middle of the first season. It was the first episode to introduce the Romulans and starship cloaking devices. It’s also a nail-bitter in which Kirk and Spock not only have to figure out how to outwit Romulans, but Spock has to face prejudice from his own crewmates for simply looking like a Romulan.

In the end, Kirk has sympathy for the Romulan commander, a fact which is recontextualized with Captain Pike in “A Quality of Mercy.”

“Honestly, we bandied about a bunch of possible episodes,” Akiva Goldsman tells Inverse. “But what's interesting about ‘Balance of Terror’ is the allegory still applies. And the story is its own object. I think if you’re a newbie, this story is distinctive and classic enough that you’ll be intrigued to know how we’ve diverged. And hopefully, the old pros will be delighted.”

Although Paul Wesley’s new Captain Kirk makes his debut in the SNW finale, this exact version of Kirk isn’t who we’ll see in Season 2. Pike has jumped ahead to an alternate 2266, and in this “future” Kirk is the captain of the USS Farragut, not the Enterprise.

“Yes, we’ll see more [James] Kirk in Season 2, but he’s not this 2266 Kirk,” Myers explains. “We’re not jumping ahead again to 2266 like we have here. But yes, we will be meeting some new legacy characters next season. I feel like I gotta keep it a little bit of a secret right now.”

The finale also included the first hint of Scotty — the famous engineer of the Enterprise in The Original Series — but, only in the form of a voiceover cameo. Myers confirmed that a “voice actor” performed the lines which Scotty said to Spock off-camera but stopped short of confirming that we’ll see Scotty in Season 2.

“We weren’t quite ready to cast our Scotty at that moment,” Myers says. “That’s all I can say for now ... we're gonna meet some very interesting folks.”

Although the Season 1 finale propels Pike into the timeline of the actual Original Series — something fans have been wondering about for a while now — both Goldsman and Myers make it clear the series isn’t actually becoming a remake of TOS anytime soon.

Essentially, Strange New Worlds could go on for a very long time, and according to the showrunners, isn’t limited by the Trek canon at all. “All of us have been influenced by the way Star Trek has evolved,” Goldsman says. “I that what we have now is sort of marriage of two tones. Even if we’re a bit light and glib, we have real emotion. We’re not scared of going dark. We’re not afraid of having fun. Like all the great shows before — TOS, Next Gen, DS9 — we’re not ashamed of being a serious science fiction show.”