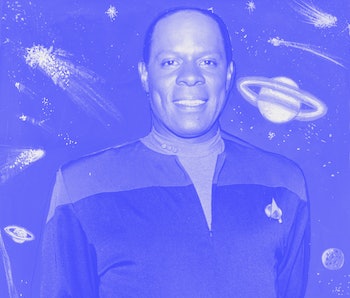 The best Star Trek was, perhaps, misunderstood in its time. Although many hardcore Trekkies know this series is amazing, in the actual 1990s when the show aired, it suffered from “middle child” syndrome — not as classic as The Next Generation and not as shiny and new as Voyager.

And yet, 23 years after the series ended, Deep Space Nine remains the most binge-able of the older Trek shows. Here’s why.

In 1994, the science fiction magazine Sci-Fi Universe ran a cover story called “Deep and Confused.” This headline kind of sums up everything you need to know about how the sci-fi fan zeitgeist thought about Deep Space Nine in the ‘90s. Edited by legendary journalist Mark A. Altman, the Sci-Fi Universe cover story was actually praising the series, while noting that its reputation was somewhat misunderstood by the mainstream.

This is the perfect microcosm for thinking about Deep Space Nine’s reputation outside of nerdy Trek circles. If you’re only casually interested in Trek, Deep Space Nine might seem like the most confusing and off-putting show of them all. Just the title makes it sound like it’s too deep in the weeds.

And yet, if you’ve missed the whole Star Trek renaissance in the 1990s, Deep Space Nine is the one series that most resembles what contemporary TV is like now. Unlike The Next Generation and Voyager, where the early seasons begin rocky and uneven, the first season of Deep Space Nine is very solid.

Out of every single Trek series, it easily has the best series premiere. Although crucially connected to canon that had been established just a few years prior in The Next Generation, the two-hour 1993 debut of DS9, “Emmisarry,” tells you everything you need to know about the series. It’s a great primer on the larger Star Trek universe, too.

What’s the show about? In one sentence it’s this: A diverse group of awesome people on a space station have to guard a wormhole and also explain to aliens that live in said wormhole the basic concept of linear time. If you’re looking for a science fiction series that actually embraces hardcore sci-fi ideas, look no further than Deep Space Nine!

Today, DS9 is correctly lauded for the groundbreaking turn of Avery Brooks as Commander (later Captain) Benjamin Sisko, the first Black actor to lead a Star Trek series. Again, this fact alone — and the diverse cast of the show — makes the series feel much more contemporary than many other sci-fi shows of the time. Deep Space Nine explored racial tensions and religion. It even gave Trek its first LGBTQ+ romances and overtly bisexual characters. Not all of this was perfect, but, in almost every progressive way, DS9 pushed the envelope more than its older sibling, The Next Generation.

Beyond all of the wonderfully progressive reasons to revisit DS9, what makes the show easy for a modern viewer is that its structure is more serialized than the slightly choppy, episodic nature of The Next Generation or Voyager. At first, DS9 wasn’t quite as tightly serialized as its pseudo-rival Babylon 5, but the idea that the show adhered to internal continuity and assumed audiences were watching every episode was both bold and risky as hell.

Today, there are countless shows which owe their existence to Deep Space Nine, perhaps most notably Star Trek: Discovery, but also the rebooted Battlestar Galactica and For All Mankind. Those last two shows were produced by Ronald D. Moore, who broke into writing on The Next Generation, but arguably, did some of his best season-long arc-plotting on Deep Space Nine. Along with Ira Steven Behr, Robert Hewitt Wolfe, Naren Shankar, René Echevarria, the legendary Michael Piller, and many others, the writing of DS9 remains as fresh today as it was in the ‘90s.

If you’ve never watched the series and never considered yourself a Star Trek person, DS9 is a surprisingly satisfying place to start. All seven seasons of the excellent leave Netflix forever at the end of June 2022. But the show will presumably stream on Paramount+ forever.