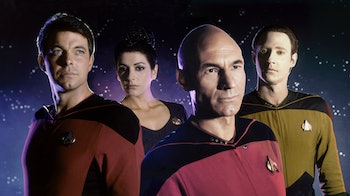 Before 1987, sequels, spin-offs, or reboots to TV shows mostly didn’t exist outside of the world of sitcoms. Yes, Laverne & Shirley and Joanie Loves Chachi were both spin-offs in the Happy Days universe, but the idea of creating a sequel series to a beloved drama series — with an entirely new cast and none of the original characters — had never clicked until Star Trek: The Next Generation. It was a risky series that redefined the entire landscape of pop culture. And for that reason, among several others, you should revisit the show before it leaves Netflix forever on April 2, 2022.

If you’ve always lived in a world in which there were like bajillion distinct versions of Star Trek, it may be hard to grasp just how important The Next Generation was, not just for the Trek brand but mainstream science fiction in a post-80s movie world.

Unlike the existence of newer Trek shows now (like Picard or Discovery) or even newer Star Wars shows (like The Mandalorian and Obi-Wan Kenobi), the start of The Next Generation was not building off of an established media empire and looking to capitalize on already existing rampant popularity.

While it’s true that the Trek movies made been a mainstream success at the box office (The Voyage Home cleaned up in 1986), those movies were fairly low-risk from a studio perspective. Starting with The Wrath of Khan in 1982, their budgets were tightly controlled. In other words, although the critical reactions and box office results of the Trek movies in the ‘80s were mixed, those films were defined by their ability to end. An open-ended, ongoing Star Trek series was much riskier. Up until The Next Generation, the idea of a mainstream and successful sci-fi TV series was basically not a real thing.

In 2021, Next Generation star LeVar Burton put it this way, “We were actually a harbinger of things to come, just look at the universe of entertainment we currently live.” This feels like an overstatement, but it’s not. By the time The Next Generation entered its third season, it became very popular, pulling in an average of about 20 million viewers a week, a record for a syndicated show.

There was no longer a question that the risk of launching a show like this was worth it. But the fact that it happened and became successful is bewildering. The Next Generation’s inception — crafted by original Star Trek creator Gene Roddenberry — was a bit rocky, and its first two seasons are very rough to rewatch in many spots. Although TNG eventually eclipsed the classic show in mainstream popularity, it’s hard to see how that was possible in the fairly uneven first two seasons.

But the nice thing about TNG, both then and now, is that it doesn’t require you to know anything about Star Trek to watch it. It was a soft-reboot and sequel at the same time, and because most of the episodes adhered to telling self-contained stories, it was a pretty easy show to get into. So, if you’ve never watched the series, and you don’t like one random episode of the show, there’s a very good chance you’ll like others. Finding an “average” episode of TNG is actually kind of hard.

All seven seasons of the show will leave Netflix on April 2. While TNG will still live on Paramount+ (with the rest of the Trek shows), its impending exit from Netflix may cause some more casual fans to binge it right now. With that in mind, the TNG-curious newbie might be wondering where to start.

While it’s tempting to tell you to skip all of Season 1, the fact remains that the Season 1 debut episode, “Encounter at Farpoint,” does set the tone well for the entire series. And because Q (John de Lancie) is up to his old tricks in 2022’s Star Trek: Picard Season 2, seeing where it all began is pretty compelling.

However, if you watch “Encounter at Farpoint” (Season 1, Episode 1) and then just feel like randomly skipping around, you may find that it’s easier to understand the large appeal of The Next Generation. This wasn’t a show designed to be binged; it was a show that people caught weekly when it was on, which differed depending on where you lived. That’s how syndication worked! Locals stations didn't have to carry it if they didn't want to, unlike networks.

So, if you’re binging TNG on Netflix before it leaves on April 2, and you’re looking to find the best of the series, maybe just watch the first episode, and then scroll through the synopses of everything starting with Season 3. Whenever you read a premise that sounds fun, watch that episode. You’ll be simulating what it was like to watch the show in the 1990s — when all you had to go on was the “next time on Star Trek: The Next Generation” TV commercial and your local listing in the TV Guide.

Star Trek: The Next Generation is streaming on Netflix until April 2, 2022.