In 1986, Star Trek pushed a Greenpeace agenda as a blockbuster movie. It worked.

“They are not the hell your whales.” 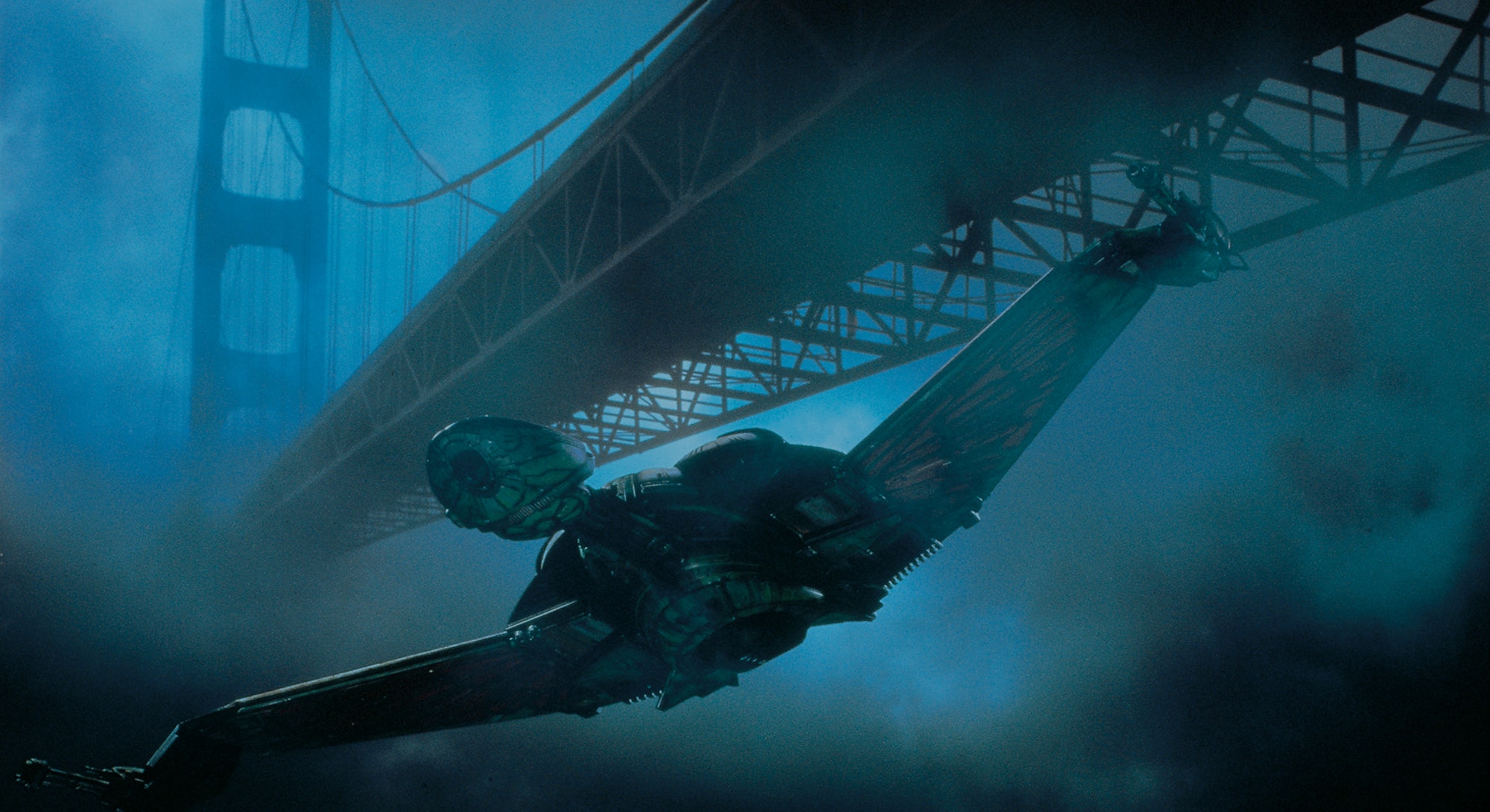 After James T. Kirk stole Doc Brown’s ride, he decided to go back in time and save the whales.

You might think I’m describing some quirky fanfiction or a deleted scene from Ready Player One. But, the truth is, the Klingon ship Kirk and company commandeered in Star Trek IV to travel back in time to 1986, was owned by Klingon Commander Kruge, who, in 1984’s Star Trek III, was played by Christopher Lloyd (who went on to become much more famous as Doc Brown in 1985’s Back to the Future).

By stealing that specific craft, the crew of the late Starship Enterprise was destined to go on a time-travel adventure. But unlike any other time-travel romp dating to the 1980s, this journey is a creative piece of commentary on a nascent environmentalism movement that put endangered species at its heart. In the fall of 1986, one year after Back to the Future, Star Trek IV: The Voyage Home not only became a transtemporal box-office hit, it also propelled climate change and concern for endangered species into the mainstream.

In short, Star Trek tried to literally save the whales in 1986, and it basically worked.

Welcome to FUTURE EARTH, where Inverse forecasts 100 years of possibilities, challenges, and who will lead the way.

Prior to J.J. Abrams’ Star Trek reboot in 2009, Star Trek IV: The Voyage Home held the record for the Star Trek feature film with the most successful box office, ever. The movie opened over Thanksgiving weekend in 1986 and went on to gross $109,713,132. To put this in perspective, Top Gun, which was the number one movie of 1986, made $176,781,728. Yes, Top Gun was the top gun, but The Voyage Home was right up there. Until J.J. Abrams, it was Star Trek’s most popular crossover film, which is saying something considering the film lacks both violence and sex. In 1986, the Trek franchise went toe-to-toe with the horror of Aliens and the sexy action of Top Gun and, while it didn’t quite win, it came out as a serious contender.

Co-written by Wrath of Khan maestro Nicholas Meyer, and directed by Leonard Nimoy, The Voyage Home was a political film imbued with environmental activism masquerading as a fish-out-of-water comedy. So, it turns out, humpback whales are just as intelligent as humans, and, at some point in the past, communicated only in whale song to this particular alien probe that looks like a smoother version of ʻOumuamua.

The movie sets out a humbling idea: If aliens were to make contact with Earth, they might not necessarily want to talk to humans. As Spock (Leonard Nimoy, directing himself) puts it “Only human arrogance would assume the message must be meant for man.” When this alien probe rolls up on Earth, hoping to talk to some whales, the probe’s transmission sounds one way from the air, but totally different underwater. These signals are also destructive and require an answer that can’t be given because, in the Star Trek universe, humpback whales are extinct.

Once Spock and Uhura realize that the probe’s signals sound different underwater, there’s only one option; get some whales and hope those whales, as Bones says, “tell this probe what the hell to go do with itself.” Kirk decides time-travel to 1986 is the only possible solution. So, not only is their mission to find humpback whales in the past but also to bring them forward in time to the future. No one has ever called this movie Star Trek Some Whales Back to the Future, but that’s what happens.

The Voyage Home starts with this tough talk, and then, less than 15-minutes later, dumps the famous Starfleet crew into a comedy of errors on the streets of San Francisco in 1986. During the trip back in time, the stolen Klingon ship is broken (of course) and the crew has to figure out how to build a whale tank that can fit inside of their (broken) spaceship.

This means Kirk, Spock, Sulu, Bones, Uhura, Scotty, and Chekov are super busy. Sulu flies a helicopter expertly but forgets how to use windshield wipers. Chekov gets mistaken for a quirky Russian spy. And, best of all, Spock tries out profanity for the first time, referring to swear words as “colorful metaphors.” There’s never been a science-fiction time-travel romp quite like The Voyage Home, probably best exemplified by the moment Spock uses a Vulcan nerve pinch to silence a rowdy punk’s boom box on a city bus.

But The Voyage Home’s overarching message comes to the fore in an over-the-top scene in which Spock literally connects his mind with that of a whale. The idea is elegant: If human beings possessed Spock’s telepathic powers, we too might connect with other creatures and, in turn, have a greater understanding and compassion for the other, defenseless denizens of our world. The heart of the movie is when Spock jumps into a giant whale tank and mind-melds with a humpback whale named Gracie. Later, when cetacean biologist Gillian Taylor (Catherine Hicks) accuses Spock of “messing with my whales,” Spock fires back “They like you very much, but they are not the hell your whales.” The whales own themselves and Spock respects that.

The Star Trek characters come from a more enlightened future, and they’re ashamed of the actions of humankind in the “past” — the present for moviegoers of the ‘80s. In 1986, humpback whales really were on the endangered species list. In the movie’s final scenes, Kirk puts his stolen Klingon spaceship directly between a whaler’s harpoon and Spock’s new whale friends, saving them from humanity. For an audience unaware of environmental activism, it was a wake-up call.

“Greenpeace used to go out in rubber rafts in front of the Russian ships to try to prevent them from firing their harpoons, and that’s where that idea came from.”

“There’s a homage to Greenpeace in the movie because the idea of putting the spaceship between the whaling ship and the whales and being hit by the harpoon has Greenpeace roots,” Leonard Nimoy said in a 1986 interview. “Greenpeace used to go out in rubber rafts in front of the Russian ships to try to prevent them from firing their harpoons, and that’s where that idea came from.”

In 1986, Greenpeace representatives noted that while The Voyage Home played fast and loose with the truth, “the message is right on the money.″ After the movie’s release, there was an uptick in donations to Greenpeace, according to the organization. In fact, Greenpeace went so far as to say that the film “subtly reinforces why Greenpeace exists.”

Star Trek IV’s influence on real conservation efforts in the 1980s is hard to quantify today. In 2016, the humpback whale was removed from a federal endangered species list, and the National Oceanic and Atmospheric Administration called the humpback whale comeback “an ecological success story.” When that happened, several publications pointed out a link between Star Trek IV and the resurgence of humpback whales. Quite literally, Star Trek’s cautionary tale seemed to usher in a better future in which whales didn’t go extinct in the 21st century.

It is impossible to prove a direct link between The Voyage Home and the de-escalation of whale hunting in the ‘80s and ‘90s. Correlation and causation are two different things, after all. In truth, years of dedicated environmental activism, political action, and education did the hard work. But it’s also true that Star Trek IV opened up a lot of people’s eyes to humanity’s cruelty toward whales and the perilous state of their survival.

At one point in the film, Bones quips that the 20th century is like “the Dark Ages” to his future, enlightened eyes. But, perhaps because of a quirky and bold Star Trek movie, some of us started to see the light.