“I was the gateway drug to Star Trek” 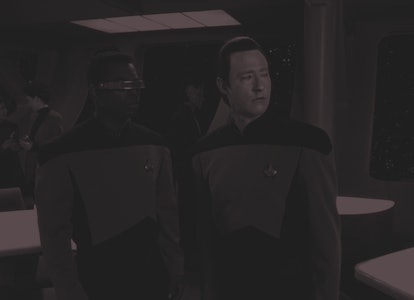 Nostalgia is the slipperiest of all pop-culture phenomena. In the blink of an eye, what was once edgy or risky becomes a beloved institution. It may seem hard to believe now, but just like Discovery has its detractors today, the first live-action Star Trek spin-off — The Next Generation — was met with a lot of naysaying from the fan establishment in 1987.

These days, the rules of contemporary pop nostalgia firmly favor the nineties Trek, so it’s fitting that the mobile strategy game Star Trek: Fleet Command just introduced a bunch of Next Generation themed-missions and playable characters from the USS Enterprise-D.

To promote the arrival of Geordi, Data, Riker, and Crusher in Fleet Command, actors LeVar Burton, Jonathan Frakes, and Brent Spiner have reunited for a new commercial celebrating the ongoing love for all things TNG. As Fleet Command goes back to the future of The Next Generation, Inverse caught up with Burton and Spiner to figure out the exact moment when TNG went from sci-fi underdog to arguably the most celebrated version of Star Trek ever.

In The Next Generation, Burton’s Geordi La Forge and Spiner’s Lt. Commander Data were the biggest BFFs on the Starship Enterprise. And the coziness of the TNG cast is 100 percent replicated IRL, too.

“It’s never ended,” LeVar Burton tells Inverse. “Seeing Jonathan and Brent for this [game] is not weird at all. In terms of the three of us getting together, it happens as often as we are able to make it happen. We have remained very, very close. We are all on a text chain, and we keep in touch because we love another. We are a family.”

Spiner, who was best man at Burton’s 1992 wedding, agrees: “A week doesn't go by that I don't talk to at least one or two of the cast. That includes everybody of the group,” he says. “I remember the first time Patrick [Stewart] and I were face-to-face on the set of Picard. It was both odd and familiar at the same time. Just to see each other in uniforms and, you know, me painted, and him being Jean-Luc.”

The public demand for more Data, Geordi, Picard, Riker, Troi, Crusher, and Worf wasn’t always the constant it is now. In 1987, a sizable portion of fans of The Original Series staunchly opposed a new version of Trek.

“At the beginning I kind of looked side-eyed at The Original Series fans who expressed openly and vocally that there was no room in their hearts for another Trek,” Burton says. “As a Trek fan myself, I saw Trek fans as people who had an open mind. I don't know when exactly it happened, but there was a point at which we were being embraced. In terms of industry acceptance, it was in our last season (1994) that we were Emmy-nominated as best drama on TV. At that point, it was more than just a sci-fi fringe thing. We were actually a harbinger of things to come, just look at the universe of entertainment we currently live.”

When I tell Burton that my childhood enthusiasm for TNG was initially connected to his fame on Reading Rainbow, he says with a laugh, “I hear that a lot. I was the gateway drug to Star Trek.”

Spiner attributes TNG’s mainstream acceptance to the addition of a prominent recurring guest star in the show’s second season.

“We really got credibility when Whoopi [Goldberg] came on the show as Guinan,” Spiner says. “That was a real turning point. There are some decent episodes in the first season, and we had a Peabody nomination for ‘The Big Goodbye,’ and there were some bad episodes. But when a major movie star wanted to be on the show, it was crucial. All of a sudden the general public who watched sci-fi kind of went, wow, we'd better take this seriously. I think more people started to watch it because Whoopi was at the height of her power at that time.”

After the finale of Star Trek: Picard Season 1, Spiner has said he’s done playing Data. But that doesn’t mean he’s done with Star Trek forever. This fall, Spiner will release a book called Fan Fiction, a mystery novel on the set of a fictionalized Next Generation. He describes the book as both a noir homage with some meta-fictional turns that might be reminiscent of Kurt Vonnegut. Spiner says he’ll never say never on returning to Star Trek as a new character either in Picard, Discovery, or Strange New Worlds.

“There are three things that draw me to something: The role, who I'm going to work with, and if pressed, the money,” Spiner says. “If two of those things are there. It’s a no-brainer. And often, like with Star Trek, there’s all three and then it’s a dream come true.”

Burton has recently fielded a ton of questions about potentially returning to the role of Geordi La Forge for Picard. Those answers have ranged from “maybe,” to an indication that he’s not doing Season 2, but would be open to Season 3. But some fans have forgotten that, like Jonathan Frakes, Burton directed episodes of TNG, Deep Space Nine, Voyager, and Enterprise. (Love that pro-union DS9 episode, “Bar Association?” Yep, that was directed by Burton.)

“I love directing and I really owe my directing career to Rick Berman and Star Trek,” Burton says. “I love Star Trek. I'm absolutely open to coming back to the franchise as a director.”