“I don’t necessarily need to go back to doing that.” 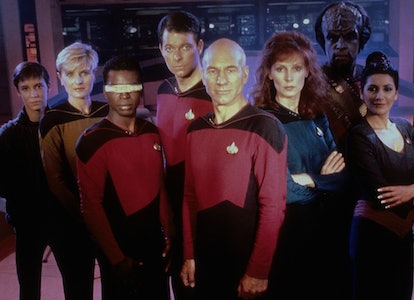 “No,” says Picard, “They would put themselves at risk out of loyalty to me and I do not want to have to go through all that again!”

In the context of that episode, Picard is mostly referencing an alternate timeline from “All Good Things...” in which Riker, Data, Worf, and Beverly all helped him in a different version of his retirement. And although Jean-Luc did end up calling on Riker and Troi in Season 1, we didn’t see any of the other TNG crew during Picard Season 1 — except for Data, who is, of course, dead.

So, now that Q is returning for Season 2 and Guinan still rumored, could more beloved TNG crewmembers be coming back? A couple of recent developments have some people wondering — but we may have some cold earl gray to splash on that theory.

Is Geordi La Forge going to be in Star Trek: Picard Season 2?

In the backstory for Star Trek: Picard, it was Geordi La Forge who helped Jean-Luc construct the rescue armada to evacuate the Romulan Empire. But, that all happened in the IDW comic book series Star Trek Picard: Countdown, and LeVar Burton’s La Forge never actually appeared in the series. While Burton and Michael Dorn (who plays Worf, more on him in a moment) both visited the set of Picard during the Riker-centric episode “Nepenthe,” Burton has recently made it clear he’s probably not coming back. Speaking to Newsweek recently, Burton said:

“I’m really happy with where Geordi sits in my life. [...] And even though I feel like it would be fun to revisit him now and again, living in his skin every day, I don’t necessarily need to go back to doing that.”

To be clear, Marina Sirtis said something similar before Picard Season 1, and then, she appeared as Troi in one of the trailers. Elsewhere in the interview, Burton said he could “maybe” appear in Picard because the chronological setting of the series was “contemporaneous” with the actual ages of the characters and actors. So, it’s a no — but it’s also a maybe.

Will Worf show up in Star Trek: Picard Season 2?

This one is a little bit trickier.

Around the same time Burton downplayed the idea of Geordi returning to the Final Frontier in Picard, Michael Dorn seemed to fulfill the dreams of countless fans by revealing that he had returned to Starfleet. In a mysterious tweet on April 19, 2021, Dorn wrote: “Just got the news. Being summoned back into action. Starfleet calls. #ad.”

The “hashtag ad” part of this tweet halted most everyone’s excitement that Dorn was referring to a straight-up return to one of the Paramount+ TV series. In fact, io9 reporter James Whitbrook independently confirmed with CBS/Viacom that whatever Dorn is tweeting about, “it has nothing to do with a Star Trek Universe on Paramount+ original series.”

Dorn hasn’t taken down the tweet, which gives us exactly zero information. Most folks, like the editors of TrekMovie, are leaning toward this tweet “revealing” that Dorn is returning to Trek for either Star Trek: Online or Star Trek: Fleet Command; both popular online games that have a long history of bringing back both contemporary Trek actors and legacy actors alike.

Michael Dorn has long advocated for a Worf-centric spin-off series, and also holds the unique distinction of being the one Star Trek actor who is actually in the most hours of Star Trek. In addition to playing Worf in seven seasons of TNG, Dorn also appeared as Worf on Deep Space Nine, starting with Season 4, which accounts for a grand total of 10 seasons of ‘90s Star Trek, as well as five feature films. Dorn played Worf in all four TNG-centric movies but also appeared in 1991’s Undiscovered Country as Col. Worf, an ancestor of TNG Worf, who acts as Kirk and Bones’ public defender when they are put on trial for assassinating the Klingon Chancellor.

Because we know Worf’s family has a lot of history in the Trek canon, you could hypothetically put him in anything. Strange New Worlds could revisit the Klingons, and who knows, maybe Dorn could play Col. Worf’s father, and go even further back in time.

To be clear, like Burton’s suggestion that he doesn’t need to come back for Picard, the mystery of Michael Dorn’s tweet doesn’t necessarily rule him out for Picard either. But, it’s certainly not a confirmation. Just like the circumstantial evidence used to convict Kirk and Bones of a crime they didn’t commit, right now we just don’t have enough information to go on.

And who knows? If Worf and Geordi are coming back to the Final Frontier, the Trek bosses might be saving that surprise for the moment it actually happens.

Star Trek: Picard Season 2i s currently filming and slated for release in 2022.