“Figure out the end earlier.” 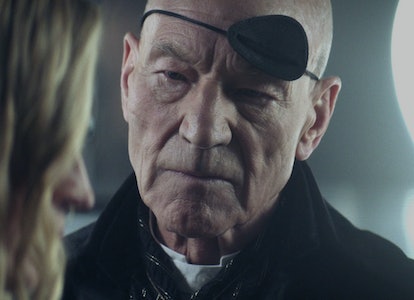 Well, tell it to the internet! While Picard is relatively tighter narratively than some of the other recent Treks (seriously, what is Red Matter again?) that doesn’t mean some very vocal fans didn’t complain about the resolution in the Picard Season 1 finale. The mystery of why the Synths attacked Mars was answered, but perhaps not to everyone’s liking. Picard’s fatal neurological condition was fixed, but again, the twist, for some fans, came out of nowhere.

If you were among the Trek fans who liked Picard but felt let-down by the Season 1 finale, then there’s some good news. Picard co-creator and co-showrunner of Season 2 — Akiva Goldsman — has heard you. And he’s promising that this time, things will be different.

Speaking to the Hollywood Reporter on April 12, Akiva Goldsman was asked if there were any big lessons from Picard Season 1 and he responded frankly:

“Figure out the end earlier. If you're going to do a serialized show, you have the whole story before you start shooting. It's more like a movie in that way — you better know the end of your third act before you start filming your first scene.”

This answer heavily implies that the Season 1 finale, “At Arcadia Ego part 2” — directed by Goldsman himself — wasn’t entirely the ending everyone had decided upon when the series began filming. This isn’t to say that Goldsman and co-creator Michael Chabon just made up Picard turning into a Synth on the spot. Back in 2020, Chabon told me that a specific plot point was essential to the larger philosophical point of the series.

“If we didn’t do, then that meant we were totally chickening out on one of our clear, stated theses of the series,” Chabon said at the time. “That synthetic life is just as valuable as organic life. If Picard believes that premise, and by extension, we believe it, and the Federation and Starfleet believe it, then the ultimate test and the ultimate proof of that belief can be found in making Jean-Luc Picard a synthetic life form.”

Goldsman clearly isn’t saying the whole thing with Picard’s “Golem” body was unplanned. Instead, he’s pointing out that bread crumbs required for viewers to get to that point could have been less confusing. And he’s saying if you want someone to blame, blame him. In this new Hollywood Reporter interview, Goldsman clarified, saying, “I think where our storytelling is complicated, if it is frustratingly so, it's just our own fault for not doing it well enough.”

So, what does this mean for Picard Season 2? The shower answer is that Picard Season 2 will probably be even more serialized than Season 1. We know Q has returned, which could create some personal stakes for Jean-Luc — or it could blow the Trek canon wide-open, Avengers: Endgame, style. (Or both?)

Finally, Goldsman told THR that hardcore knowledge of Trek canon wasn’t required to get into Picard, but that watching Picard episodes in order is kind of the point. “You don't have to have watched Next Gen to watch Picard — but by the time we get to episode six, you better have watched episodes one through five or your eyes are going to cross. “

If Star Trek: Picard Season 2 focuses on a season-long mystery, it seems like fans can expect the clues to be slightly less obtuse, and for the payoff to be planned out before anything else. The last time Picard met in Q in “All Good Things...” he saved the universe by realizing that huge destructive anomaly paradoxically originated in the future, and traveled back in time to destroy the past.

Now, it looks like Akiva Goldsman has learned the same lesson: Save the universe, by starting at the end.