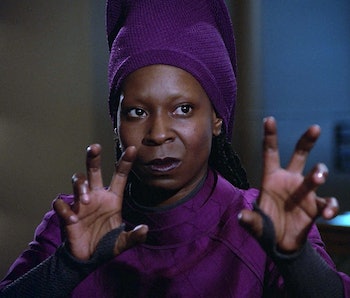 Remember when Guinan threatened to bust-out some magic space powers in Star Trek: The Next Generation Season 2? If we're very lucky, Whoopi Goldberg's return in Picard Season 2 could finally lay a very strange Trekky mystery to rest. In a recently resurfaced interview, Goldberg seems to imply her tenure on Picard Season 2 will be more than just a one-off. This suggests Guinan could be part of a larger story arc.

So, if we're going to get Guinan for a few episodes in Picard, it's time to dig into everything we don't know about her. Here's what Goldberg said about her Trek comeback and how it could lead to more answers about Guinan's mysterious past in the larger canon of Trek.

Over on TrekMovie, an interview that Goldberg gave to SFX Magazine suggests she'll be doing more than just a guest-spot in Season 2 of Picard. Here's what she said:

"From time to time, I talk to Patrick [Stewart] about Star Trek. Hopefully, I will be joining their cast for a little while next year. I’m very excited about that."

TrekMovie seems to think that Goldberg saying "hopefully" is likely due to her careful handling an NDA she's signed. That's because it seems like writer Michael Chabon has kind of already confirmed he's ready to write material for Picard and Guinan. TrekMovie points out, that Chabon told The Hollywood Reporter last March to: "I’ve gone back to rewatch some of the more key Guinan episodes from Next Gen, the major Picard and Guinan moments. She’s such an amazing actor; I can’t wait."

Is Guinan really back for Picard Season 2? This is the big question! Back when Picard debuted in January 2020, Stewart publicly invited Goldberg back to the role of Guinan on The View. The actor evoked the name of Alex Kurtzman (Picard's executive producer) and invited Goldberg back to Trek on the air. Goldberg accepted this offer but since then, there's been no official announcement from CBS. Obviously, when this first went down there was no COVID-19 pandemic, and shooting schedules for various shows — including Picard Season 2 — were far more ambitious. Goldberg recently appeared in a major role as Mother Abigail on the new version of The Stand, which airs on CBS All Access, the same streaming service that airs all the new Star Trek shows. So the character's return certainly seems likely.

The greatest Guinan mystery — Although this wasn't established until the film Star Trek Generations, Guinan belongs to an alien species called the El-Aurians, who can live for several centuries. In the TNG episode "Time's Arrow," Data traveled back in time to the ninteenth century, only to discover Guinan living on Earth. Guinan had not time-traveled — she was also alive back in that time. In Generations, we learned Guinan was rescued by the Enterprise-B in the late 23rd Century, roughly 70 years before she became the bartender on the Enterprise-D under Picard.

In "Q, Who" when the crew first met the Borg, the enigmatic Q implied he had a history with Guinan, and told Picard: "This creature is not what she appears to be. She's an imp..and where she goes, trouble always follows."

Q later implied that Guinan's name wasn't always "Guinan," and she also owned up to "dealings" with Q at some point two centuries prior. None of this was ever picked-up again on an episode of The Next Generation. This means, in theory, Picard Season 2, could provide some kind of solution.

What it means for Picard Season 2 — Chabon has already demonstrated a unique ability to combine disparate elements of Trek canon into a new, unified backstory. For the Short Treks episode "Q&A," Chabon depicted Spock's first day on the Enterprise, and reconciled Spock's out-of-character behavior from "The Cage" into a kind of prequel story that explains his personality back then. Could Chabon do something similar with this mysterious link between Q and Guinan?

Relevantly, Guinan and the El-Aurians had their home planet destroyed by the Borg sometime before the events of Star Trek: Generations but, after Guinan's time on Earth in the 19th Century. For fans, this fact is just one of several continuity gaps about the Borg in Trek canon. In "Q, Who" Picard and the crew had never heard of the Borg. But in Generations, we learned that people from Kirk's time were well- aware of El-Aurian refugees. What story did these people give Starfleet back then? Did they not mention the Borg for like 70s years?

This also connects to the backstory of Seven of Nine, too, a regular on Star Trek: Picard. In Voyager, we learned that Seven's human parents attempted to study the Borg well-before the USS Enterprise "met" the Borg in "Q, Who?" So, this means there was all sorts of info about the Borg running around the galaxy before Picard and the gang found out about them. Could Picard Season 2 fix all of that, too?

It seems likely! If you're going to bring back Guinan, and she's going to be in the same show as Seven of Nine, it feels like a conversation about the Borg is bound to happen. And when it does, we know we can count on Guinan to provide some really stiff drinks.