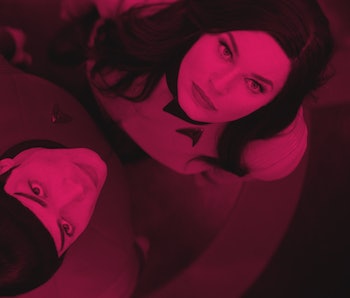 Ahead of the debut of Lower Decks, the Star Trek franchise has been quietly putting out smaller-stakes short-form stories since 2018. Set in the Discovery, TOS, and Picard timelines, the anthology series Short Treks provide essential backstory and tell smaller tales that otherwise wouldn't make the cut of a 13-episode season arc.

The second season of Short Treks is streaming free for a limited time on YouTube. It includes "Children of Mars," "Ask Not," The Trouble With Edward," "Q&A," plus the animated shorts "The Girl Who Made the Stars," and "Ephraim and Dot." Three of these episodes initially seemed like were standalone spin-offs to Discovery Season 2, but now that Strange New Worlds is coming, they have a whole new meaning. Strange New Worlds is still at least year away, but here's why three episodes of Short Treks — "Ask Not," The Trouble With Edward," and "Q&A" set up the highly anticipated spinoff.

3. "Ask Not" sets up at least one possible new Enterprise crewmember — "Ask Not" puts a new spin on an old Star Trek trope: A Starfleet cadet undergoing a test that they don't realize is a test. In this episode, a space-station bound would-be-officer named Cadet Sidhu (Amrit Kaur) is tasked with keeping Captain Pike under guard after he's supposedly been accused of mutiny. In the end, Sidhu learns that the whole thing was an elaborate test to see if she had what it takes to be stationed to the Enterprise. The episode ends with Sidhu being given a tour of the ship by Pike, Spock and Number One. We also get a glimpse of the ship's engine room in this timeline.

Now, we get the sense that "Ask Not" takes place sometime after "Q&A," (because Spock's there) but beyond that, it's not exactly clear if this is pre-Discovery Season 2, or post-Discovery Season 2. But, relative to Cadet Sidhu showing up in Strange New Worlds it kind of doesn't matter. If she was stationed to the Enterprise at any point, the chance that we'll see her as a regular member of the crew in Strange New Worlds is super-high. Not to mention, fans on Twitter and elsewhere have been petitioning to make sure Sidhu will appear on the show since it was announced.

But, that's not totally for sure. In TOS, the Enterprise had more than one science officer, and Chekov even worked under Spock as a junior science officer. If "The Trouble With Edward" happens in the early 2260s, that means Lynne Lucero could easily be in Strange New Worlds, and she could still be rocking a blue uniform, and working with Spock in the science department. And, if she's not on the Enterprise in the new series, she could still return as the Captain of the USS Cabot, who perhaps, comes to help out her old shipmates every once and while.

1. "Q&A" is a low-key pilot for Strange New Worlds — Part of the reason CBS is streaming these Short Treks for free is that the series Short Treks has been nominated for an Emmy in the category of Outstanding Short Form Comedy or Drama Series. And part of that nomination probably has to do with the stand-out episode, "Q&A." Written by Picard Season 1 showrunner and longtime TOS fan, Michael Chabon, "Q&A," tells the story of Spock's very first day on the USS Enterprise in the year 2254. Canonically, this makes "Q&A," the earliest filmed story set in TOS canon, since it predates both "The Cage," and Season 1 of Discovery.

The story sees Spock (Ethan Peck) figuring out how to keep his cool, and why he learned some of his self-control from his friend and mentor, Number One (Rebecca Romijn.) Last year, at the time "Q&A" aired, Michael Chabon told me that when he pitched "Q&A," he also pitched a story about Number One's last day on the Enterprise, the details of which have not been revealed.

"Q&A" will get you excited for Strange New Worlds. The characters are layered and likable, and the performances from Peck and Romijn are phenomenal. "Q&A" also packs in several Easter eggs and references to the entire canon of Trek, which is quite a feat when you consider the episode is only 14-minutes long. If "Q&A" is any indication of how Spock, Pike and Number One will behave in Strange New Worlds, then that spin-off series has a very, very bright future.

Short Treks Season 2 is free on YouTube until August 31.

More like this
Culture
Jan. 25, 2023
30 years later, Star Trek is about to pay off a massive villain comeback
By Ryan Britt
Culture
Jan. 18, 2023
Your science fiction education begins with Babylon 5
By Ryan Britt
Entertainment
Jan. 18, 2023
Everything you need to know about That ‘90s Show on Netflix
By Claire Fox
LEARN SOMETHING NEW EVERY DAY.
Related Tags
Share: