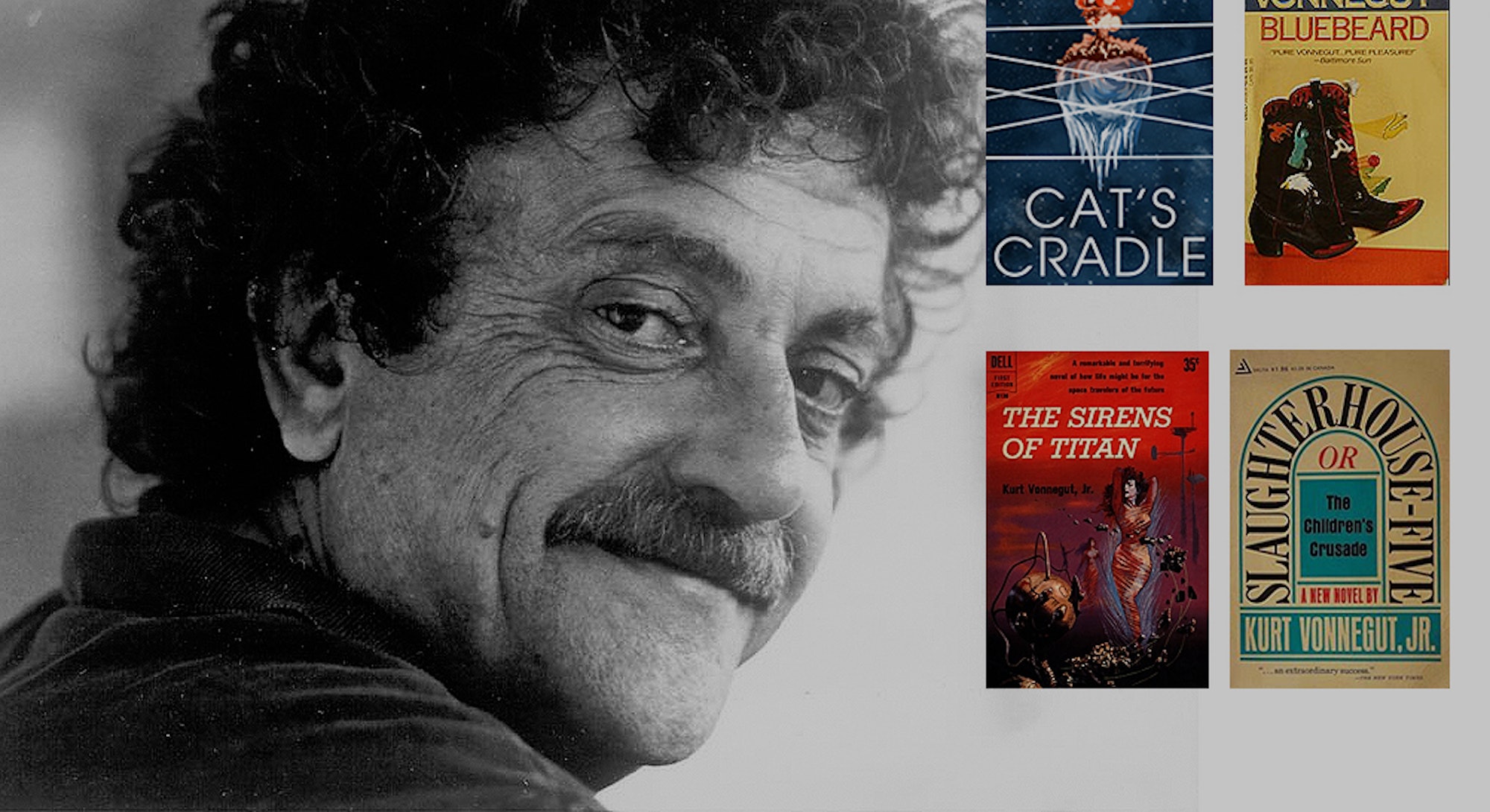 Very few so-called science fiction authors of the 20th century were as prolific as Kurt Vonnegut, and almost none had the same sort of mainstream political and intellectual impact. But as a social satirist, Vonnegut’s texts don’t lend themselves to the same kind of analysis as the writing of Philip K. Dick or the chronology of Sherlock Holmes. The questions of connectivity, which are evermore important these days, are more circuitous: How does biography of Kilgore Trout in Breakfast of Champions connect to the time-loops of Timequake? And what does the basement in Slaughterhouse-Five have to do with the caves of the planet Mercury in The Sirens of Titan?

With this week’s release of newly revised and updated The Vonnegut Encyclopedia by Marc Leeds, all things Vonnegut are explained, including the way things are and are not connected. But make no mistake: There is a legit canon here, which means there’s also stuff that doesn’t count.

Several collections of unpublished Vonnegut short stories, which were later published after his death — including 2010’s Look at the Birdie or 2012’s While Mortals Sleep — are specifically not included in The Vonnegut Encyclopedia. And Marc Leeds told Inverse that he made that call for a specific reason.

“I wanted [to include] published pieces that Kurt was involved with and then authorized. Everything else I — as a scholar — deem important,” he said. “Some of those stories [the non-canonical unpublished ones] Kurt was really trying to work out a voice … but for one reason or another these stories were turned down or he gave up on them. I think there is value in all of those [posthumous] manuscripts, but if one is going to talk about true canon, then everything that’s not got his stamp on it, is basically a purloined letter.”

Like any serious and smart fan of literally anything, Leeds tempers his biases with reason and nuanced insight. He knows some of those non-canonical stories might contain what he calls a “Vonnegutian” essence, but the “dribs and drabs of unpublished work could come out forever,” making it impossible for him to write a “definitive encyclopedia” unless the line was drawn somewhere. This refreshingly clear-eyed view of literary journalism and criticism is what gives the energy in The Vonnegut Encyclopedia back to the source: Vonnegut himself.

Still, Leeds takes pains to point out that Vonnegut was not one of these tempestuous writers who believed everything he wrote was brilliant. Instead, Vonnegut relied on and invited the collaboration with editors. Leeds told Inverse that that after the critical and financial success of Slaughterhouse-Five Kurt Vonnegut found that editors were less and less willing to edit his writing.

Most of the entries in the The Vonnegut Encyclopedia lets the work of Kurt Vonnegut’s novels and nonfiction speak for itself. There’s not a ton of commentary from Leeds and definitely less than you would find in an annotated guide to authors who have been deceased for a lot longer. In the instance of Vonnegut’s fictional hack sci-fi alter ego, Kilgore Trout — the star of Breakfast of Champions and Timequake — Marc Leeds provides us with Trout’s multiple and contradictory biographies, but stops short of speculating too much beyond that. For many readers, Kilgore Trout is simply a cipher for Vonnegut, but was he based on another writer? Inquiring Vonnegut fans and sci-fi fans want to know: Was Trout inspired by Philip K. Dick or Theodore Sturgeon?

“I’ve always come down on Theodore Sturgeon side,” Leeds said. “And not for any overt scholarly evidence. Just as sort of legend, it seemed to fit better.” But the Encyclopedia provides us mostly with the facts, whereas we the fans, provide the legends which fuel the speculation and the conversation.

Still, there are certain entries in which Leeds has found and made unique observations — wholly his own — about thematic motifs which can’t appear in multiple Vonnegut books by accident. Specifically, the preponderance of basements in several Kurt Vonnegut novels. The entry for basement isn’t the longest entry in the book, but it’s one of the most poignant and unexpected even if you’ve read the novels of Vonnegut numerous times.

“In a curious plot repetition,” Leeds writes in the Encyclopedia, “Vonnegut places a number of major characters and incidents in the basements and other underground dwellings.” This is an example of Leeds discovering many things about Kurt Vonnegut which only an outsider could notice; often, writers don’t necessarily recognize their own tropes. Having revealed that he wrote an entire dissertation on this subject, Leeds summarized the way he presented his Vonnegut-in-the-basement theory initially to the literary critic Leslie Fiedler in 1987.

“Here’s the thing about basements: In every one of Kurt’s books, the major character is sent underground or there is an underground episode … but for Kurt those basement events are real,” he said. “That’s his Slaughterhouse-Five moment. And he comes up sans an epiphany … these characters come up as Kurt comes up … and all of his characters have to suffer his point of view.”

Leeds is referring, of course, to the fact that Kurt Vonnegut, as a soldier, was actually trapped in a real basement during the firebombing of Dresden in World War II. Coming up from that basement then, is an autobiographical moment in the majority of Vonnegut’s books, even when “the basement” is a cave on the planet Mercury in The Sirens of Titan. While Leeds admits that one Vonnegut novel — God Bless You Mr. Rosewater — doesn’t contain a “basement,” it’s still a telling and exciting detail a reader could only gain from having this book.

If you’re a huge fan of Vonnegut’s books, talking to an expert like Marc Leeds feels intimidating at first, but then you realize he’s having as just much fun making these connections between the novels as you are. When I told Leeds that I thought the novel Bluebeard was essentially Vonnegut’s naturalistic remake of Slaughterhouse-Five, Leeds said laughing: “I would like to see you flesh out this argument! … This is the way I thought about the books. You’re doing what I was doing, which is why I wrote the Encyclopedia. People have these “huh” moments and then they go back to the books. I have that feeling all the time.”

If you’re somebody who has read one Kurt Vonnegut book then there’s a chance you’ve read them all. For the devout reader of Vonnegut there’s a voracious sense of completism. And, Marc Leeds and his new Encyclopedia are here to guide you through it all. Just don’t blame him if you become unstuck in time while you’re reading.