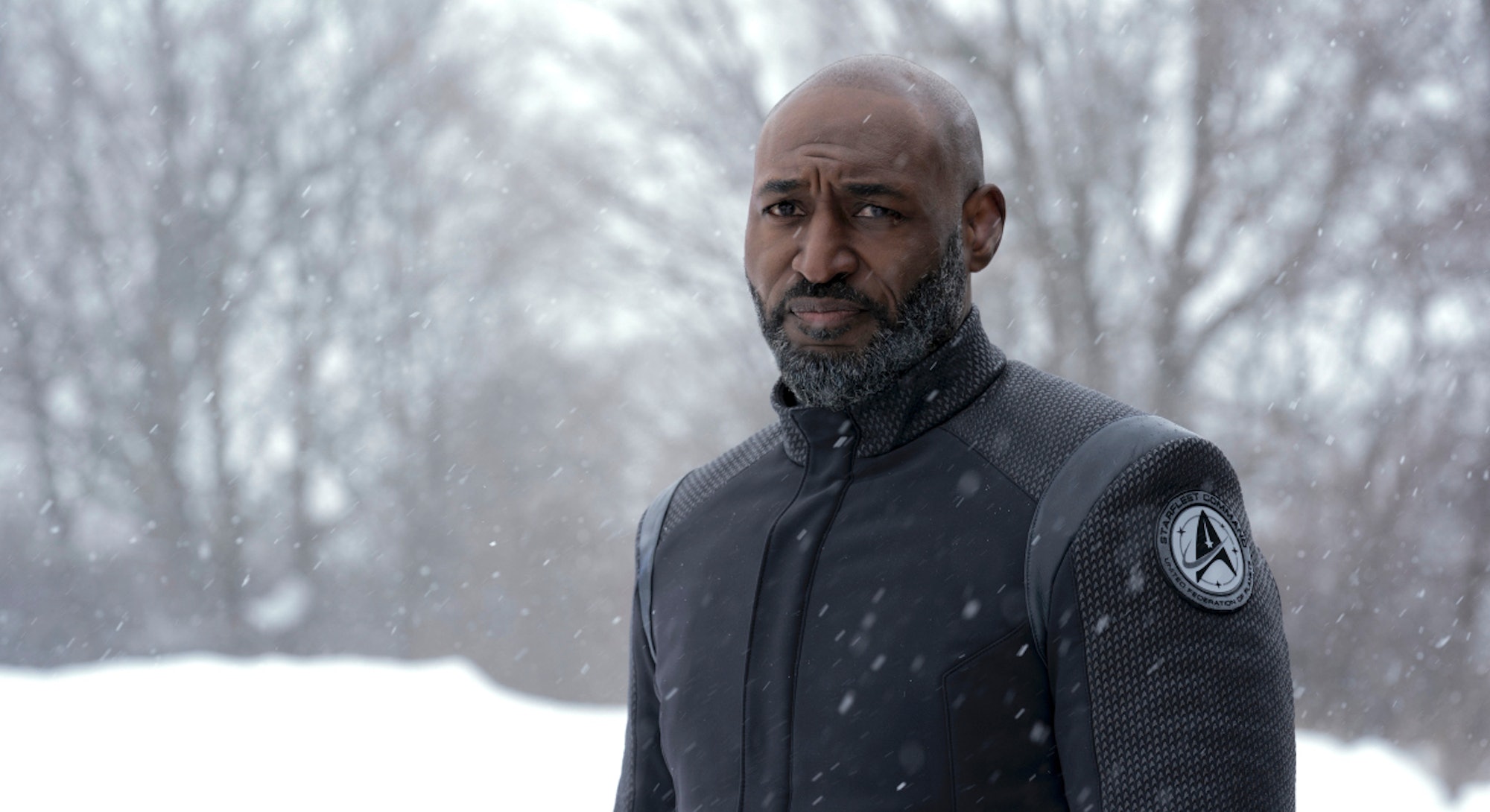 Everyone knows the story of Spock, Captain Pike, and a guy named “Kirk” happened a certain way. But, what Star Trek: Strange New Worlds presupposed is, that maybe it didn’t?

“We had to reimagine the show for the current day,” Strange New Worlds co-showrunner Henry Alonso Myers tells Inverse. In other words, the new Stark Trek series offers more than a few surprises in Strange New Worlds.

Inverse caught up with Myers just before the debut of the series to chat about recasting Robert April, Spock’s long engagement, and the unexpected arrival of a guy named Kirk that nobody saw coming. (Spoilers ahead for the first episode of Star Trek: Strange New Worlds.)

“Bring the funny to Star Trek”

Before working on Strange New Worlds as co-showrunner, Henry Alonso Myers was a producer on The Magicians, a quirky adaptation of the Lev Grossman fantasy novels of the same name. He’s got a lot of other credits too, but in chatting with him about the funny and fun tone of some episodes of Strange New Worlds, Myers admits he does have a pretty extensive background in comedy.

“Look, I have a background in writing humor,” he says. “I’ve worked on Ugly Betty. I worked on The Magicians. I worked on Future Man. One of the things I think that was very important to me was to bring the funny to Star Trek.”

Myers is quick to point out two things. First, other existing Star Trek shows have funny moments. And second, Lower Decks exists. His larger point is that, like older Trek shows, Strange New Worlds is in the unique position of shifting tones fairly dramatically from one episode to the next. As series star Anson Mount told Inverse, Myers reaffirms that “Star Trek explores different genres.”

Myers elaborates on why each episode of the new series feels so different, even though there are only 10 episodes in Season 1:

“It’s one thing when [previous Star Trek series] had like 22 episodes, and you’re just trying different things. But when you're only doing 10, we wanted to make sure that we were showing the breadth of what that can be. We have this unbelievably funny talented cast, and we wanted to show them having that side. So, there's a lot about humor. That is really at home in Star Trek. Look at your life. When you have conversations with people, sometimes, it’s funny.”

This isn’t to say Strange New Worlds is a comedy, it’s just that, many moments are lighter than some of the heavy drama of Picard or Discovery. Myers wants fans to know the idea behind Strange New Worlds wasn’t to change Star Trek, but rather to simply figure out how the more traditional format could work on contemporary TV.

Within the vast Star Trek pantheon — and the specific canonical timeframe of Strange New Worlds — there was suddenly the opportunity for the series to play with existing preconceptions about various Trek characters in exciting new ways. Specifically, the pilot episode for Strange New Worlds (also titled “Strange New Worlds”) reveals three twists that could raise some eyebrows from longtime Star Trek fans. Here’s what Myers had to say about each of the most prominent canonical Trek shifts in Strange New Worlds.

In the first episode of Strange New Worlds, we learn that T’Pring (Gia Sandhu) and Spock (Ethan Peck) were formally engaged for quite a long time prior to the classic episode “Amok Time.” For many, this will present a huge shift in our assumptions about Spock’s relationship with T’Pring before the moment he fights Kirk over her in The Original Series.

For Myers, the opportunity here was to “get into her head” and tell T’Pring’s side of the story.

Although this detail leaked online before the pilot episode aired, one of the biggest surprises in the first episode of Strange New Worlds is the revelation that the series will feature Robert April — the first Captain of the Enterprise NCC-1701 — in a semi-recurring role. Originally, April appeared in animated form in a 1974 episode of The Animated Series called “The Counter-Clock Incident,” and was voiced by Scotty actor James Doohan. He’s now played by Adrian Holmes, a Black actor, in contrast to the seemingly white cartoon version.

There’s not one serious Star Trek fan who finds this casting choice controversial (though some racist trolls have made the usual complaints). In fact, one of the original writers of the 1974 episode, Fred Bronson, expressed his approval of the casting of Holmes as April on Twitter.

According to Myers, the decision to bring the character of Robert April into Strange New Worlds was all about making sure the newer series reflected contemporary sensibilities. He says:

“The first captain of the Enterprise has this like a mythic place, I think in a certain way. He had Pike as his first officer. He has this mentor relationship with Pike, which is really interesting. There wasn't anything crazy about trying to cast him. In the 1960s, they were extremely progressive when they made Star Trek. That was an extremely diverse crew for the time. But I think is not particularly diverse for 2022. We really liked Adrian. I thought he was a really good actor, and we thought he had the gravitas to be that guy for Pike.”

1. Who is Lieutenant Sam Kirk?

Without a doubt, the biggest shock for Trekkies in Strange New Worlds is the revelation that the series will feature James T. Kirk’s brother — Samuel Kirk — in a recurring role. Although Pike and Spock discuss a “Lt. Kirk” at the beginning of the pilot episode, this turns out not to be James T. Kirk by the end of the episode. Yes, Paul Wesley is playing James T. Kirk in Strange New Worlds at some point, but not yet. Instead, we’ve suddenly got Dan Jeannotte as Sam Kirk, working in the life sciences section of the Enterprise with Spock as his boss.

In existing canon, Sam Kirk only appeared as a dead body in The Original Series episode “Operation -- Annihilate!” In that one brief scene, William Shatner played Sam Kirk with a mustache. For the new, younger Sam Kirk, that mustache is back. But what else do we know about this guy? His last name is Kirk, is he anything like James T. Kirk?

“He is very much not his brother,” Myers says. “And that is important. He's a different person. He comes from a different place. He has different ideas. He and Jim Kirk have a complex relationship, that we will eventually learn more about. But, the intention wasn't to come in and give us little ‘Kirk-lite’ flavor. Sam Kirk is his own man.”