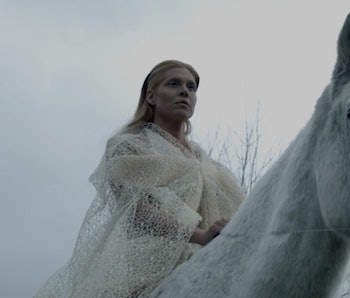 The one thing a show called The Magicians absolutely must include is a bunch of magic. And yet, the entire second season of Syfy fantasy romp has subtly and not-so-subtly explored the brutally terrible ramifications of what actual magic would really do to your life. In the season 2 finale, “It Begins,” The Magicians finally asks the question it’s been hinting at all season: What does it mean to be a magician without magic?

Spoilers ahead for The Magicians Season 2 finale: “Have You Brought Me Little Cakes?”

Though it’s been a long and winding road, the events of The Magicians’s Season 2 finale are not without precedent. Because the Lev Grossman-penned novels that inspired the series carry an affinity for the Narnia books, it’s probably a good time to re-read The Lion, the Witch and the Wardrobe. Remember the chapter which almost trolls the reader with the title: “Even Deeper Magic From Before the Dawn of Time?” Yeah, that’s pretty much what happens in this season finale. Except, in Narnia that deeper magic is good, but here in The Magicians, it means the plug on magic has been pulled.

“It Begins” brings all the hints about higher gods from throughout the season to a head by almost flippantly introducing “the Plumber,” a character who nonchalantly enters various worlds, finds where magic has been leaking out, and shuts it all down. If The Magicians were like a Marvel movie, this would be like taking away all the funding and superpowers from The Avengers with the flick of a switch. Everyone is fucked. Fillory is about to be overrun by mad evil fairies, Margo is rocking an eyepatch, and Alice is crazy depressed. Dean Fogg creates a ragtag version of Brakebills University where all the students now study magic more as a theory than as a practice. Magic, it seems, was something that leaked into our world by accident, and now that it’s gone, all anyone can do is to hope for its return.

In writing The Magicians books, Grossman was loosely inspired by Larry Niven’s “Warlock” stories and the novel The Magic Goes Away. These Niven tales focus on thinking of magic as a resource, and not an unlimited one. In the Grossman book The Magician King, this concept plays out similarly to this season finale, though the finale is decidedly more hardcore and all-encompassing.

In a way, by taking away magic, The Magicians has also removed status and class from all of its characters. Julia and Quentin are equals again, making the final moments where Julia seems to still have a spark of magic all the more poignant. The Magicians has spent nearly an entire season punishing its characters for using magic, and now, with one quick flick, has taken it away. In Grossman’s books, this meant Quentin (and the others) were required to grow up a bit. And it looks like Season 3 of the show, will, in spirit, force them to do the same — unless of course, there’s still some even deeper deeper magic yet to be discovered.

The Magicians has been renewed for a third season slated to air on Syfy sometime in 2018.

More like this
Culture
8.5.2022 10:30 AM
How Netflix's epic Sandman finale sets up Season 2
By Mónica Marie Zorrilla
Entertainment
12 hours ago
6 Game of Thrones episodes you must rewatch before House of the Dragon
By Alex Welch
Entertainment
8.14.2022 12:00 PM
Rings of Power's biggest canon change could ruin one major Tolkien story
By Alex Welch
Share: