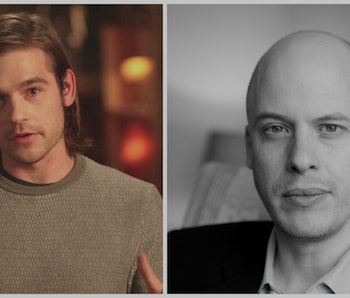 When author Lev Grossman watches Syfy’s The Magicians, he’s sometimes surprised by what he sees. The characters he originally dreamed up in his Magicians books are about to embark on their second television season, meaning Grossman theoretically has all the answers as to what lies ahead. But thanks to magic and a shifting medium, that’s not always the case. “Even I get shocked by what happens,” he told Inverse, “and I wrote the damn books.”

Both the show and the books focus on Quentin Coldwater, a young man obsessed with a series of fantasy books collectively called Fillory and Further. When he grows up, he discovers an elite secret magical school called Brakebills where real magicians think fantasy crap like the Fillory books is a joke. That’s the case until it turns out that Fillory is real too. In the show, Quentin is joined in his adventures and misadventures by fellow students Alice, Penny, Eliot, and Margo, but also his childhood friend Julia, a magically inclined woman who did not get admitted into Brakebills.

While the show’s plot has diverged from the books, certain elements have also been grafted on top of one another. In the books, Julia’s journey was told (via several chapters of flashback) in the second book, The Magician King, while the Syfy series had her machinations run concurrently with the other characters. And though the thematic stakes are loosely the same as the Grossman novels, the plots have unfolded differently. Ostensibly, Executive Producers John McNamara and Sera Gamble have creative control over the show, but Grossman revealed that the powers-that-be of the show consult him “more than you’d probably think.”

Seemingly, the author is totally cool with ceding a huge amount of creative control to the team at Syfy. He described the changes made from his trilogy of three books to be a “pretty transparent,” process between himself and the Syfy Channel. “As John and Sera and the writers hash out the stories, they generate a lot of documents — season outlines, episode treatments, script drafts, and so on,” he said. “They throw everything into email and run it past me for feedback.”

But certain plot elements and characters are easier to control than others. Back when The Magician King was released in paperback in 2012, Grossman said that the “Julia’s story took me by surprise a little bit.” Meaning, he wasn’t aware the character would play such a large role until he found himself basing a good deal of her backstory on his own experiences. And now, five years later, Julia is still so fascinating that she’s being fleshed out in all sorts of new and unexpected ways.

“I think Julia still surprises John [McNamara] and Sera [Gamble],” Grossman said. “She definitely surprises Stella[Maeve]. She operates without the kind of institutional constraints that the others do — no Brakebills, no Fillorian monarchy. It makes her more of a chaos agent.”

Despite the many changes to canon, Lev Grossman feels that television has been the ideal format for The Magicians, and he’s happy to let others expand his world. The true opportunity for these fantasy novels wasn’t in what they would lose in an adaptation, but instead, a thirst for what the stories could gain. “I wanted to see The Magicians as a TV show rather than a movie because there were so many things I wanted to get to in the books but couldn’t,” Grossman said. “When I sent them off to Hollywood, I didn’t want to see the books smooshed into two hours. I wanted to see them expanded into dozens of hours. Just to give one example: Julia doesn’t get into Brakebills. Why not? The reasons are hinted at in the books, but in the TV show they dig into that and get explicit about it.”

Grossman knows that fans of the show might not be the same as fans of the books. There is an overlap of course; there are places where a reader of the books could be “compensated for the spoiled-ness with a certain amount of smugness for having read the book.” But the author knows there is an inherent, basic core difference between the two. “Reading and watching are such totally different activities,” he said, “because they operate through the narrow channel of text, books have to stay very lean. There’s only so much you can say, only what you can squish into words. TV as a medium is by its nature so much more information-rich than books, that it makes sense that you’d add plot and detail to fill out all that extra bandwidth.”

For Lev Grossman, the story of Quentin Coldwater and his adventures in Fillory and further are over, and yet those stories are brand new at the same time. In the reality of The Magicians, there are ways to move between worlds and into other dimensions. In this way, The Magicians universe can subsume other universes. Could Quentin of the novels could cross into the world of Quintin for the books? And will Lev Grossman ever write new books in this series to reconcile such an event?

“When boxed into this particular corner, I always bring up the example of Ursula K. Le Guin writing a fourth Earthsea novel, like what, 20 years after the third?” Grossman continued, “So, If I’m going to come back to the Magicians books it’ll probably be on that plan. I’ll see you all in 2034.”

Despite all the changes to his books on the TV version of The Magicians, Grossman stills sees something familiar reflected back on the TV screen. Actor Jason Ralph might play Quentin Coldwater, but the author thinks that might be someone else. “I sometimes look at him and say, I haven’t seen a character quite like that on TV before,” Grossman told said. “He reminds me so much of me. It’s a little uncanny.”

The Magicians returns for its second season on SyFy on January 25.