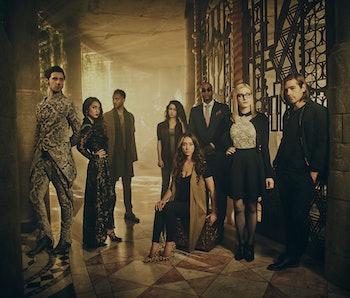 The second season of Syfy’s The Magicians premieres on January 25, and if the first season is any indication, it will be a wild ride. Based on a trilogy of books by author Lev Grossman, the show focuses on grad school-aged mope Quentin Coldwater (Jason Ralph) and his journey through a magical school called Brakebills University. Soon, he and his magical chums Alice Quinn (Olivia Taylor Dudley), Eliot Waugh (Hale Appleman), Margo Hanson (Summer Bishil), Penny Adiyodi (Arjun Gupta), and Julia Wicker (Stella Maeve) find themselves embroiled in a conflict involving a malevolent magical being known only as the Beast with the fate of a fantasy realm called Fillory in the balance.

The show heads into Season 2 with plenty of questions to answer, but here’s what you should really be asking.

5. Is the Brakebills squad okay?

That Season 1 cliffhanger was a doozy. Its the type of thing you’d imagine would be reserved for Game of Thrones and not for The Magicians, and yet here we are with everyone left for dead. Just when the Brakebills squad moved their magical chess pieces into position to take down the Big Bad guy — the Beast — he slices off Penny’s hands, breaks Eliot and Margo’s necks, made Alice bleed out, and left Quentin looking on in horror. It’s a cliffhanger for sure, and yet we cant just up and get rid of the entire cast now can we?

Thankfully, the problems in the final moments of the Season 1 finale are resolved quite nicely in the first minutes of the new season’s premiere. But that isn’t to say there aren’t way more problems ahead for everyone. They have to track down the Beast once more, but on top of that, the magical Wellspring in Fillory has been drained dry. All hope seems to be lost, but let’s hope Quentin and the gang don’t suffer the sophomore slump in more ways than one.

4. How will Eliot embrace his role as High King of Fillory?

Some arachnid-based superhero once said “with great power comes great responsibility” or whatever. It’s something that the newly crowned kings and queens of Fillory are going to have to stomach, especially the borderline alcoholic Eliot. Not only is the show’s over-indulgent, quip-happy comic relief the High King of Fillory, he’s also a married man with a brand new wife.

Eliot is, after all, a sexually fluid kind of guy, but a monogamous relationship added to his Fillorian troubles only compounds the stress. It’s not all pleasantries and a killer new wardrobe for him. He can’t even get a decent glass of wine in Fillory. But it’s mostly a big deal because as High King he can’t leave, while his bestie Margo and the gang can come and go as they please. Time passes differently between the two worlds, so there’s no guarantee that everyone will see each other again. Season 2 is going to have to get to the root of what makes Eliot tick, and whether he can stomach his newly granted power.

3. Will Julia’s trauma get the meaningful narrative it deserves?

Forget the fact that Julia’s origin story in Season 1 wasn’t fully introduced until book two. The most contentious moment of the show so far has been Julia’s potentially backstabbing decision in the finale. She betrays her friend Quentin to team up with the Beast, but it isn’t for naught. It’s the only way she can confront Reynard the Fox, the evil god who brutally raped her after murdering her other hedge witch friends.

Her supposed duplicity gains way more sympathy when you look at it from her perspective, which should play out in Season 2. She’s coping with major sexual trauma by getting revenge on her rapist. But in doing so, she prevented Quentin, Alice, Penny, Eliot, and Margo from defeating the Beast who wrought his own terror on Fillory. The Magicians makes you feel empathetic towards its villains (minus Reynard) — remember, the Beast himself was born out of sexual trauma. So the balance of judgement between everyone will be a major narrative push.

2. What’s up with Quentin’s mental illness?

Quentin was a depressed dude early on in the series and even succumbed to his demons for a short period with a dreamlike hallucination seen in “The World in the Walls”. We’re meant to think that Quentin’s emotional anxiety is eased as he gradually discovers the magical world of Brakebills, and save for some relationship drama with Alice, his mental illness becomes kind of a non-issue towards the end of Season 1. Given that explosive finale, there’s no way he’s not going to reckon with an emotional imbalance going forward. He’s a classic case of someone who got everything they ever wanted but didn’t know how to handle it. He’s now a magical king of Fillory, the once-fantastic land he’s been obsessed with since he was a kid. It turns out it’s much more complicated than he could have ever imagined. His post-Beast encounter will inevitably force him to look inward and try to deal with these newfound shortcomings. Plus, his drunken threesome with Margo and Eliot made his relationship with Alice fall apart. Just because there might be a spell for them doesn’t mean he can make his problems disappear.

1. Will there be more useful magic this season?

The show is called The Magicians, and in the words of Dean Fogg, why can’t they do some goddamn magic!? There were great little moments to showcase magical skills, and building up the ability to use them, but the Brakebills squad really needs to put them to good use, at at least, demonstrate more mastery of different spells. And even though it was Fogg who banned battle magic from Brakebills, but it’s obvious that playing nice with spells needs to go bye-bye. The plan against the Beast went up in smoke. But hopefully, if Quentin and his pals to get their shit together, they’ll let the magical fireworks fly.

More like this
Entertainment
7 hours ago
New House of the Dragon “making-of” book plunges into the fantasy hit’s creation
By Jeff Spry
Entertainment
Jan. 20, 2023
Legend of Vox Machina will continue — even if Dungeons and Dragons doesn't
By Eric Francisco
Culture
Jan. 25, 2023
30 years later, Star Trek is about to pay off a massive villain comeback
By Ryan Britt
LEARN SOMETHING NEW EVERY DAY.
Related Tags
Share: