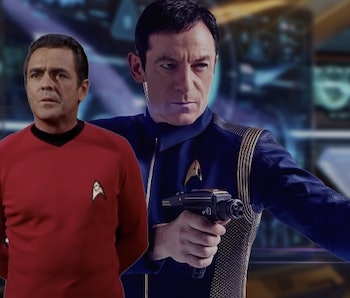 As the Discovery crew adopted Cadet Tilly as its interim captain while trying to survive in the Mirror Universe, Captain Lorca was forced to hide his identity. He did so by adopting a thick Scottish accent and pretending to be the Discovery’s head engineer. If that felt a little familiar, then you’re not going crazy — it was a cheeky reference to one of Star Trek’s most iconic characters, Montgomery Scott.

In yet another shocking twist from this week’s Star Trek: Discovery episode, “Despite Yourself,” Michael Burnham discovered that Tilly is the Discovery’s captain in the Mirror Universe. Unsure of Lorca’s place aboard the ship, Burnham encouraged Lorca to disguise his voice. After a moment of hesitation, Lorca came through with a heavy Scottish accent, mumbling his way through a jargon-laden explanation of why the Discovery was having “technical issues,” and branding himself as the chief engineer. Lorca’s hastily crafted “disguise” is a clear reference to the original Star Trek series’ Montgomery Scott, Chief Engineer aboard the U.S.S. Enterprise.

So, this means that Lorca knows Scotty, right? It certainly lines up with the Discovery timeline so far. Scotty joined up with Starfleet in 2241; Discovery takes place, supposedly, in 2256 within the same timeline. Scotty was assigned to the Enterprise in 2265, after the events of Discovery. But even if Lorca doesn’t know any other members of the future Enterprise crew, there’s a chance he could know Scotty from some other Starfleet assignment.

And even if Lorca had never met Scotty personally, the man’s reputation certainly does proceed him. Commonly considered a miracle worker, it would make sense for Lorca to want to channel Scotty’s ability to regularly get his crew out of life-threatening situations. Plus, it helps that Lorca actor Jason Isaacs is English and has done plenty of voice acting — hearing him break out an on-point Scottish accent wasn’t too much of a surprise.