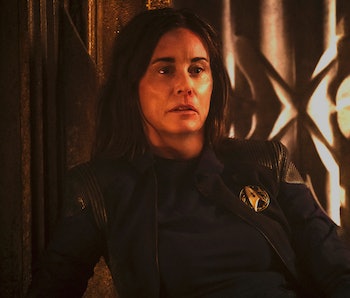 In science fiction, sometimes a cliffhanger can take place on an actual cliff, like the ending of Star Wars: The Force Awakens. Other times, like the mid-season finale of Star Trek: Discovery, the cliffhanger drops a starship into a parallel universe.

If the USS Discovery is now in the Mirror Universe, as some fans have posited, then an interesting question presents itself: Which universe did the Discovery and its crew originate from?

Most fans would tell you that Discovery is supposedly set in the “Prime” Star Trek timeline, but what does that mean? And does the Prime Universe even exist?

Mild spoilers for Star Trek: Discovery, episode 9, “Into the Forest I Go” follow.

In 2009, director J.J. Abrams and screenwriters Roberto Orci and Alex Kurtzman made a brilliant or terrible decision, depending on who you ask. Instead of being forced to follow the chronology of the original Star Trek series, they created a splinter universe formed by the invasion of a time-traveling angry Romulan named Nero. Of every reboot that ever rebooted, 2009’s Star Trek is the slyest, acting as, technically, both a sequel and a remake at the same time. And in terms of fully fleshed out parallel universes within Star Trek, Abrams’ resulting “Kelvin Universe” is most prominent.

In an attempt to qualify this there’s even a moment in 2009’s Trek where Spock (Zachary Quinto) says, almost directly to the camera, “Nero’s presence has altered the flow of history, thereby creating a new chain of events that cannot be anticipated by either party…whatever our lives might have been…our destinies have changed.”

As far as time-travel gobbledygook in sci-fi movies goes, Spock’s explanation was similar to a talk Doc gave Marty McFly in Back to the Future II when Marty and Doc arrive in an alternate 1985.

Marty suggests the pair return to 2015 and prevent future Biff from stealing their time machine. But Doc reminds him they are in a different timeline now, so they can’t go forward — because it would be the “future of this reality.” Spock didn’t have a blackboard to draw it all out in the 2009 Star Trek, but the idea is roughly the same. Once the timeline gets changed and you’re in that timeline, you’re stuck there, unless you can go back and prevent something from happening, which “resets” the timeline and restores everything back the way it was.

But here’s the problem, in Star Trek time travel stories, things never get reset exactly the way they were before. Meaning, Star Trek has been fundamentally altering its own “Prime Universe” in every single incarnation for as long as it’s existed.

Case in point: “City on the Edge of Forever.”

This famous original series episode posited an alternate universe potentially more chilling than the Mirror Universe. Bones went back in time to 1930 and prevented a social worker from dying, which caused America to lose World War II, and, through a domino effect, resulted in the United Federation of Planets never existing. Kirk and Spock try to call the U.S.S. Enterprise once they return to the future, but it isn’t even there. So, the whole episode is them going back in time and trying to “fix” what McCoy did. But, because Kirk falls in love with Edith Keeler and he and Spock watch her die in 1930, this is a different timeline than the one they were in before. The Guardian of Forever says “all is as it was before,” but from the look on Kirk’s face, that’s not exactly true. The devil is in the details.

In 2015, Red Letter Media jokingly asserted that history is changing in Star Trek “every 23 millionths of a second.” The idea here was that numerous parallel universes are being created all the time in Star Trek, possibly with imperceptible results. Episodes like “City on the Edge of Forever,” or the Deep Space Nine classic “Past Tense,” have complicated explanations for why the characters “remember” the “original” timelines, but the fact that these subtle changes to the timeline are even depicted at all seems to imply there must be a ton of timeline changes in the Star Trek universe that we don’t see.

Similarly, sci-fi author Arthur C. Clarke specifically set his novels 2010 and 2061 in subtly different parallel universes from each other, meaning the books weren’t really direct sequels. And though this might be a lot to swallow, maybe fans could view Star Trek in the same way? Just because the Kelvin Universe offers an explanation for its existence doesn’t mean we haven’t glimpsed a bunch of parallel universes already. Hell, in Star Trek: First Contact, the crew actually participates in huge historical events, just like Captain Sisko did in “Past Tense.”

Perhaps there are even more subtle alternate universes in Star Trek that don’t announce themselves. For example, in Star Trek III: The Search For Spock, Saavik is played by Robin Curtis and not Kirstie Alley. We know the real world reason for this has to do with Kirstie Alley not being available to do the third film, but if we want to have fun with it, let’s call this a parallel universe.

Maybe Star Trek III takes place in a subtly different parallel universe from Star Trek II where Saavik looks and acts totally different and David Marcus had more to do in making the Genesis Device than his mother. Speaking of Star Trek II, how did Khan get that Starfleet belt buckle necklace? In the original series, those belt buckle things didn’t exist, and Khan has supposedly been marooned for several decade. So how did he get it? Simple: this too, could be a slightly different parallel universe in which Kirk and everyone had those belt buckles earlier. Oh, and in this parallel universe, Khan met Chekov in “Space Seed” (Khan’s first canon episode) even though Chekov wasn’t in the episode originally. Essentially, like Clarke putting a continuity band-aid on his sequels to 2001, we could consider this same approach for every canon inconsistency in Star Trek.

What does this mean for Discovery? Well, literally everything. At the end of “Into the Forest I Go,” Stamets says he can see “all the permutations,” which strongly implies he’s seeing different realities. So, maybe all of Discovery is in a slightly different reality from what fans have considered to be the Prime Universe. And, though various cast and crew members have said that this is the Prime Universe, perhaps that could be interpreted to mean that events on Discovery could interact with what people consider to be the Prime Universe. During New York Comic Con this year, Discovery producer Alex Kurtzman said, “We are canon. You’ll have to be patient with us.”

Perhaps unsurprisingly, Kurtzman was involved with creating the Kelvin Timeline for the reboot films, meaning he’s familiar with conducting sideways canonical Star Trek backflips. And back in July he alluded to Discovery exploring various realities when he said “you have to understand what the different timelines were. And what the different universes were.”

Based on everything Stamets and Lorca talked about in the finale and the cliffhanger almost certainly ending in a parallel dimension, it seems that the biggest thing Star Trek: Discovery may be set to explore is the endless variations of its own history. Because if the Prime Timeline doesn’t exist, all bets are off. Which could provide answers for everything from Klingon foreheads to slick all-blue Starfleet uniforms and a secret half-sister we never knew Spock had.

Star Trek: Discovery returns with new episodes on January 7, 2018, on CBS All Access.

Read Next: Proof Captain Lorca Did It on Purpose in the Discovery Finale